OpenShift is a popular new Platform-As-A-Service application hosting platform. It's relatively complicated to deploy, but in the following post you will find out how to quickly and easily deploy a production-ready OpenShift cluster on-premise or in the AWS EC2 cloud using Ansible.

A Primer into OpenShift Architecture

OpenShift Origin is the next generation application hosting platform which enables the users to create, deploy and manage applications within their cloud. In other words, it provides a PaaS service (Platform as a Service). This alleviates the developers from time consuming processes like machine provisioning and necessary application deployments. OpenShift provides disk space, CPU resources, memory, network connectivity, and various application deployment platforms like JBoss, Python, MySQL, etc., so the developers can spend their time on coding and testing new applications rather than spending time figuring out how to acquire and configure these resources.

Here's a list and a brief overview of the different components used by OpenShift. 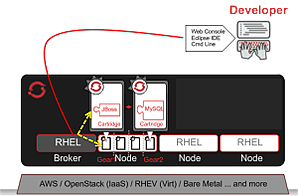 The above figure depicts an overview of the different steps involved in creating an application in OpenShift. If a developer wants to create or deploy a JBoss & MySQL application, they can request the same from different client tools that are available, the choice can be an Eclipse IDE , command line tool (RHC) or even a web browser (management console).

Once the user has instructed the client tool to deploy a JBoss & MySQL application, the client tool makes a web service request to the broker to provision the resources. The broker in turn queries the Nodes for Gear and Cartridge availability, and if the resources are available, two Gears are created and JBoss and MySQL Cartridges are deployed on them. The user is then notified and they can then access the Gears via SSH and start deploying the code.

Deployment Diagram of OpenShift via Ansible 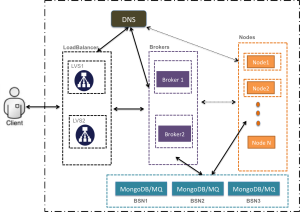 The above diagram shows the Ansible playbooks deploying a highly-available Openshift PaaS environment. The deployment has two servers running LVS (Piranha) for load balancing and provides HA for the Brokers. Two instances of Brokers also run for fault tolerance. Ansible also configures a DNS server which provides name resolution for all the new apps created in the OpenShift environment.

Three BSN (Broker Support Node) nodes provide a replicated MongoDB deployment and the same nodes run three instances of a highly-available ActiveMQ cluster. There is no limitation on the number of application nodes you can deploy–the user just needs to add the hostnames of the OpenShift nodes to the Ansible inventory and Ansible will configure all of them.

Note: As a best practice if the deployment is in an actual production environment it is recommended to integrate with the infrastructure's internal DNS server for name resolution and use LDAP or integrate with an existing Active Directory for user authentication.

Deployment Steps for OpenShift via Ansible

As a first step we need to set up a host with Ansible.

Once the EPEL repository is installed, Ansible can be installed via the following command.

It is recommended to use separate machines for the different components of OpenShift, but if this is a test environment, we could combine the services but at least four nodes are mandatory since the MongoDB and ActiveMQ cluster need at least three for the cluster to work properly.

Once Ansible is set up, check out OpenShift playbook repository from GitHub to the Ansible management host:

Set up the host inventory as follows.

Once the inventory is set up with hosts in your environment, the OpenShift stack can be deployed easily by issuing the following command:

Deploying an Application in OpenShift

To create an application in OpenShift, access the management console via any browser. The VIP specified in group_vars/all can used to access the Management Console, or IP address of any broker node can also be used.

The login page will prompt for a username and password. The default is "demo/passme". Once you are logged in, follow the onscreen instructions to create your first Application.

Note: the Python 2.6 Cartridge is by default installed by the playbooks, so choose Python 2.6 as the Cartridge.

The Ansible OpenShift repo also has playbook that would deploy highly-available OpenShift in EC2. The playbooks are also able to deploy the cluster in any EC2 API-compatible clouds like Eucalyptus.

Before deploying to EC2, please make sure:

Once that is done, the cluster can be deployed simply by issuing the command.

Note: 'id' is a unique identifier for the cluster. If you are deploying multiple clusters, please make sure the value given is separate for each deployments. The role of the created instances can figured out checking the tags tab in EC2 console.

Removing the Deployed Cluster from EC2

To remove the deployed OpenShift cluster in EC2, just run the following command. The id parameter should be the same which was given to create the cluster.

We hope this blog post was useful and informative! We are always interested in your feedback so please send us an email at info@ansibleworks.com if you have any questions, suggestions, or comments!

Ansible Me A Sandwich | Installing and Building Docker With Ansible | Listen To Your Servers Talk | Fixing Heartbleed With Ansible | Orchestration, You Keep Using That Word