If you're not familiar with it already, AWX is a graphical user interface and API server that sits on top of Ansible, turbo-charging it by providing great team based workflows. While Ansible is great for solo-developer use (even against a fleet of networked machines), larger teams often need a lot more controls and capabilities. AWX features -- among other things -- dead-simple push-button automation, centralized logging, cloud autoscaling solutions, and easy to configure access control. Access control can be hard to set up, but AWX easily lets you delegate authority between developers, admins, and other tiers of users. It helps you put Ansible automation in the hands of people who don't even write playbooks, and then easily track what's going on as they use it.

This release is particularly nice due to the addition of several new features:

Graphical Synchronization of Cloud Inventory allows you to synchronize your inventory, graphically, with Amazon EC2 or Rackspace Cloud, all without hitting the command line. Just type in your cloud credentials, press a button, and your cloud systems quickly appear in the user interface. You can manage physical systems, Amazon EC2 machines, and Rackspace machines, all within the same inventory. The Inventory UI has been upgraded as well, making it even easier to graphically manage your infrastructure -- Assign variables, move hosts into different groups, delete hosts, and more. As before, this is all integrated in with the AWX RBAC system. It's easy to delegate who can manage what, deploy what to where, and so on -- without getting bogged down with a complex policy system.

New Unified Credentials can be shared among team members without needing to know confidential (or just hard to remember) access keys. A team member can use an AWS or Rackspace credential without even knowing what it is, just as you can lend deploy keys (optionally) to team members. The system remembers, and if the team member is removed from a team (perhaps via LDAP?) tomorrow, they will no longer have access. The same works for SSH keys (if you want) or source control information for playbook checkouts and updates (if you want) -- and if you want to supply your own credentials as opposed to sharing them with a team, that's fine as well.

We've also added a really nice Home Screen Dashboard, so you can, at once glance, see what's going on with your Ansible environment -- what hosts or jobs have had recent failures? What do you need to look at today? This not only is applied on the home screen, but throughout the app Red-light/Green-light status lets you know where you need to focus your attention. Quickly drill down into what you need to work on, then hop back up for a higher level view. 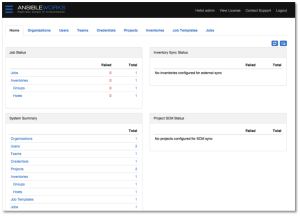 Finally, a new feature called "Activity Streams" has been introduced. Activity Streams allow you, from the context of any specific page, to tell who has been doing *what* with the resources described on that page. For a user, this might be who is editing a user object -- or things done recently by that user. For a project, it might include who is running that project, or when it was recently updated via source control. "Activity Streams" is all about providing a human-friendly audit trail that can be used for security, but just as easily, can give you a quick overview of what's been going on lately. In this release of AWX, Activity Streams are viewable by admin users, but will soon be available to all users (filtered by access control) in the follow in release. Whatever page you are on, just click the "conversation" icon on any page and the activity stream will fly in, telling you what's been going on recently. It's a context-aware event log for the 21st century.

AnsibleWorks AWX, as with Ansible, updates with new releases every couple of months or so. Stay tuned for even more exciting developments in coming releases. If you have feedback or ideas, comments, or questions, email us at info@ansibleworks.com -- we would love to hear from you.