It's time again for the annual Ansible community review. Time flies. Our upward trajectory generally continued from 2014 and 2015 through 2016, and our growth continued to bring new challenges and new opportunities.

Let's start again, as we do every year, with a look at the numbers.

Debian’s Popularity Contest is an opt-in way for Debian users to share information about the software they’re running on their systems. 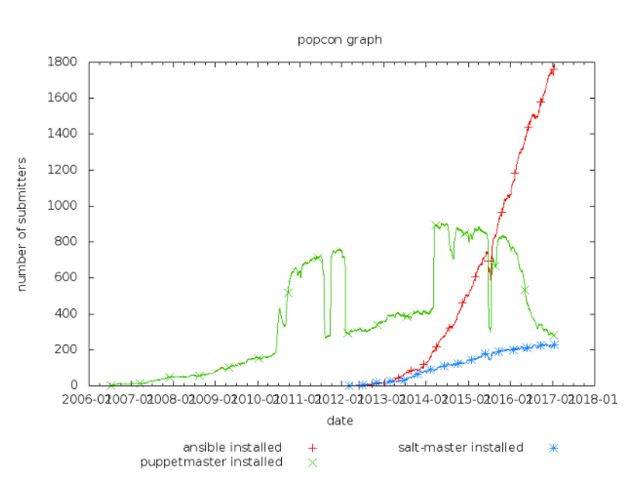 Caveats abound with this graph -- but even though it represents only a small sample of the Linux distro world, it’s useful because it’s one of the few places where we can really see an apples-to-apples comparison of install bases of the various tools. Because Ansible is agentless, we compare the Ansible package to the server packages of other configuration management tools. (Chef does not make a Debian package available for Chef server.)

We see that Ansible has continued its steady growth through the end of 2016, nearly doubling its Popcon install base again in 2016.

Ansible continued in 2016 to extend its already significant lead in GitHub Stars over other tools in the configuration management space, passing the 20k mark in December 2016. 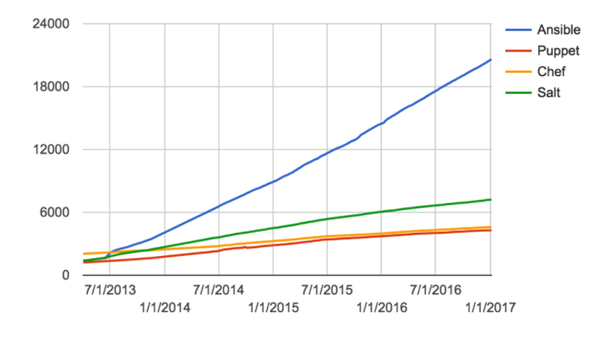 We see that in late 2016, the contributor numbers for Ansible took a pretty significant leap, putting it well above other configuration management projects. This was a result of merging Ansible modules back into the core project.

We see Ryan Williams' Hacker News Hiring Trend as a key leading indicator of hiring trends across the broader industry, and we track it closely. Over the last three months of of 2016, we saw more requests for Ansible skills on Hacker News than for any of the other configuration management tools combined.

Ansible Galaxy is our service for allowing users to share Ansible roles. Galaxy was launched in early 2014, and it's now a critical part of the Ansible ecosystem.

At the beginning of 2016, users had contributed just over 4000 roles. By the end of 2016, there were more than twice that many. Sometime in January 2017 we will surpass 10,000 Ansible roles available on the Galaxy site.

We will continue to help the growth and development Ansible meetups all around the world in 2017. If you would like to start a meetup of your own, we would be happy to help.

Ansible is one of the most popular tools in the container ecosystem for deploying containers, per the New Stack container survey of March 2016:

2016 was another great year for the Ansible community. We continue to strive to put the needs of our users and contributors first, and they helped us continue to grow in 2016.

We look forward to another great year in 2017.