It's time again for the annual Ansible community review. Let's start again, as we do every year, with a quick look at the numbers.

Debian’s Popularity Contest is an opt-in way for Debian users to share information about the software they’re running on their systems.

As with every year, caveats abound with this graph -- but even though it represents only a small sample of the Linux distro world, it’s useful because it’s one of the few places where we can see an apples-to-apples comparison of install bases of various automation tools. Because Ansible is agentless, we compare the Ansible package to the server packages of other configuration management tools. (Chef does not make a Debian package available for Chef server.)

We see that Ansible has continued its steady growth in 2017, increasing its user base here by approximately 50% in the past year.

2017 was a busy year for Ansible on the GitHub front, and in 2017 we caught the notice of GitHub itself. Ansible now has its own top level topic for GitHub searches, and that search reveals over 5000 repositories of Ansible content. We also made the 2017 GitHub Octoverse report, placing in the top ten of all GitHub projects in the categories of:

Below are graphs for GitHub Stars, Contributors, and Forks. 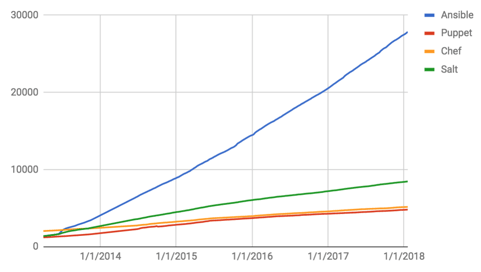 Note: the large jump in Contributors in 2016 is attributable to consolidation of modules into the main Ansible codebase.

Ansible Galaxy is the hub that allows Ansible users to share their roles with the community, and it has grown in size and importance. We crossed over the 10,000 role threshold this past year, with some new feature developments planned for the coming year.

At Ansiblefest San Francisco in September 2017, the Ansible team announced the creation of the AWX Project, the open source upstream project from which the Red Hat Ansible Tower product is derived. The project, still in its infancy, already has almost 476 forks and more than 3,000 stars on GitHub.

At the Ansible Contributors Conference in September 2017, we introduced Ansible Community Working Groups, a new way for Ansible community members to self-organize around particular topics of interest to them. In the few months since, we already have a dozen different working groups focused on key areas like Windows, Networking, VMWare, Testing, Outreach, and others.

2017 was another year of strong growth for Ansible, and it wouldn’t have been possible without our many enthusiastic users and contributors all over the globe. We’re excited to keep the Ansible community magic going in 2018.