February 18, 2021 by The Ansible Community Team

Version 3.0.0 of the Ansible community package marks the end of the restructuring of the Ansible ecosystem. This work culminates what began in 2019 to restructure the Ansible project and shape how Ansible content was delivered. Starting with Ansible 3.0.0, the versioning and naming reflects the new structure of the project in the following ways:

First, a little history. In Ansible 2.9 and prior, every plugin and module was in the Ansible project (https://github.com/ansible/ansible) itself. When you installed the "ansible" package, you got the language, runtime, and all content (modules and other plugins). Over time, the overwhelming popularity of Ansible created scalability concerns. Users had to wait many months for updated content. Developers had to rely on Ansible maintainers to review and merge their content. These obvious bottlenecks needed to be addressed. 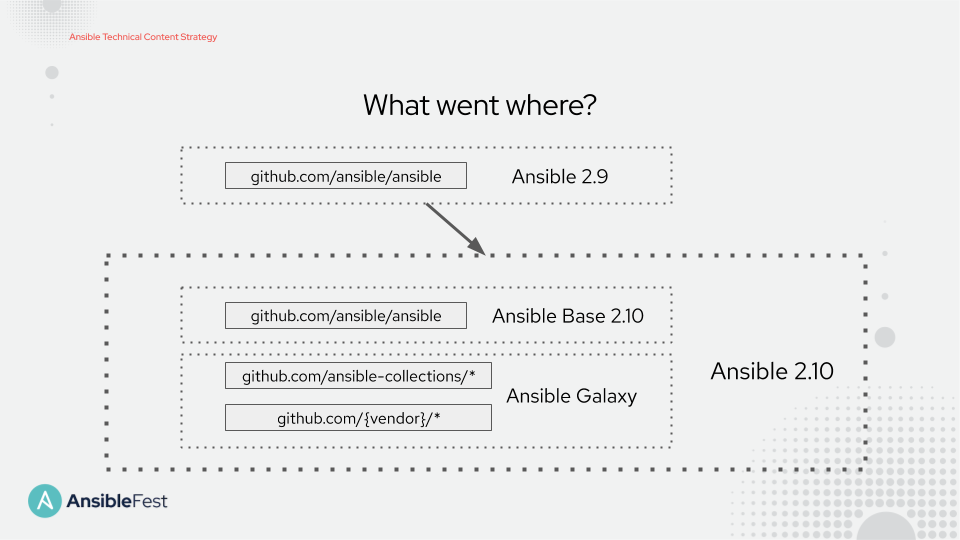 Today, there are 3 distinct artefacts in the Ansible open source world:

How the package is maintained and created has changed, but when you install the Ansible community package, you still get the functionality that existed in Ansible 2.9, with newer versions of modules and plugins. Ansible 3.0.0 includes more than 85 Collections containing thousands of modules and other plugins.

With so many changes happening at once for the Ansible community, we thought it was a good idea to put together a Q&A that can be found on our blog.

In the meantime, stay up to date with the latest news from the Ansible community by subscribing to the ansible-announce mailing list as well as the Bullhorn newsletter that is distributed every two weeks.