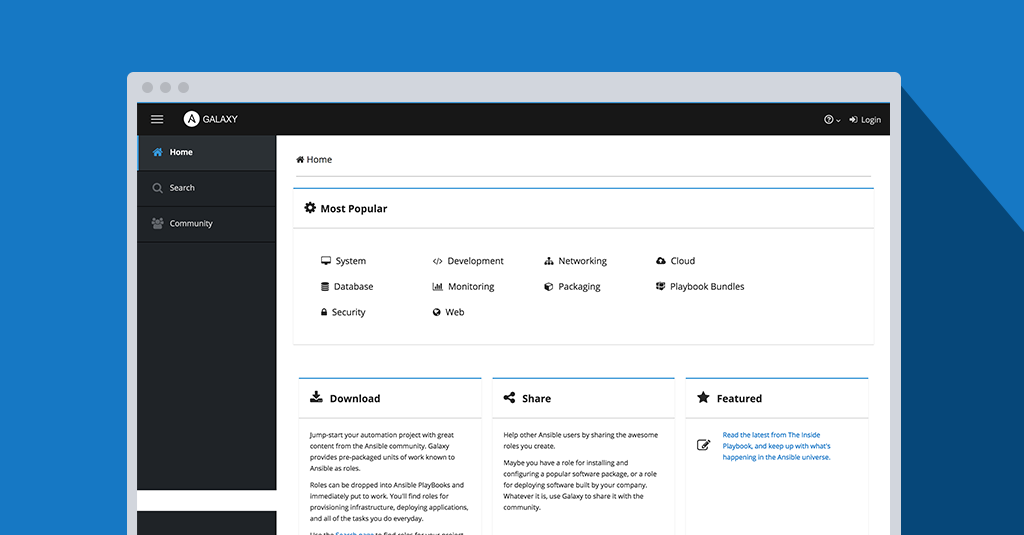 Over the years many things have contributed to the success of Ansible, including the flexibility of the tool itself, and a vibrant community that has contributed nearly 1,700 modules to the Ansible project, and imported nearly 17,000 roles to Ansible Galaxy. Not sure where to start or need an example of how to automate a thing? There’s probably a module for that and a few roles on Galaxy to get you started. This is all thanks to the community!

Since its inception, the Galaxy website hasn’t really changed much. There’s been a few minor releases with bug fixes here and there, but nothing big and exciting. For much of its existence, Galaxy has been maintained by the community team to keep it humming along as an open hub for the publishing of shared Ansible roles. In this way, Galaxy helps to facilitate the community’s enthusiasm for sharing Ansible roles.

Now, we’re changing up the status quo, with some big, cool updates planned for Galaxy. The goal is to make it an even better place for the community and partners to find and share Ansible content. Today, the expanded and dedicated Galaxy team is pleased to announce the release of an all new Ansible Galaxy hub.

This release marks the start of our commitment to making Galaxy the place for finding and sharing great Ansible content from the community and partners. These changes all may not be easily perceived, but they are “big” and we’re really excited for the Ansible community to try them out.

We’re not stopping there. The Galaxy team is already busy working on new features and upcoming releases. Here’s some of the things you can expect to see over the coming months:

Yep, that’s an ambitious list, but we want to keep making Galaxy even better!

Please share your feedback with us as you try out the new release of the Ansible Galaxy hub. To file an issue, visit the ansible/galaxy or ansible/mazer GitHub projects or reach out to us directly on IRC in the freenode.net, #ansible-galaxy channel.

Oh and in case you were wondering, releases of Ansible Galaxy v3 are going to be named after Daft Punk tracks. This release was “Doin’ It Right” and look forward to our next release: “Harder, Better, Faster, Stronger.”