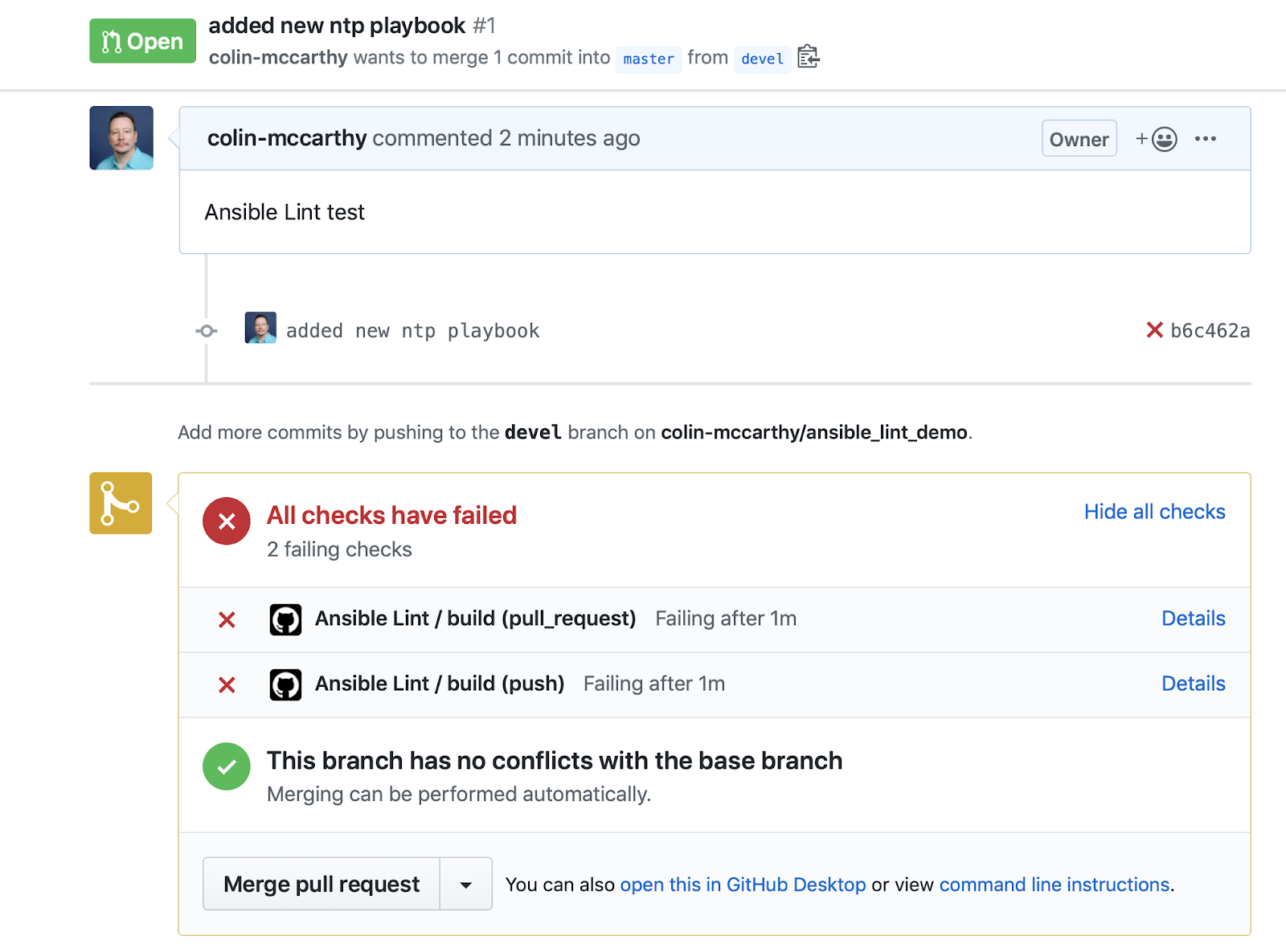 Want to trigger linting to your Ansible deployment on every Pull Request?

In this blog, I will show you how to add some great automation into your Ansible code pipeline.

CI/CD is currently a pretty hot topic for developers. Operations teams can get started with some automated linting with GitHub actions. If you use GitHub you can lint your playbooks during different stages including git pushes or pull requests.

If you’re following good git flow practices and have an approval committee reviewing pull requests, this type of automated testing can save you a lot of time and keep your Ansible code nice and clean.

What is Ansible Lint?

Ansible Lint is an open source project that lints your Ansible code. The docs state that it checks playbooks for practices and behavior that could potentially be improved. It can be installed with pip and run manually on playbooks or set up in a pre-commit hook and run when you attempt a commit on your repo from the CLI.

The project can be found under the Ansible org on GitHub.

What are GitHub Actions?

From the GitHub documentation: GitHub actions enable you to create custom workflows to automate your project's software development life cycle processes. A workflow is a configurable automated process made up of one or more jobs. You must create a YAML file to define your workflow configuration. You can configure your workflows to run when specific activity on GitHub happens, at a scheduled time, or when an event outside of GitHub occurs.

An Ansible Lint action can be found on GitHub’s Actions Marketplace.

Let me show you an example of what this would look like. Here I have a repo that has an Ansible Playbook.

I attempted to submit a pull request to add a new playbook. The Ansible Lint Action kicked off and eventually detected an issue and returned a failed message.

Why did it fail?

I’m able to view the build logs under the Actions section of my repo. It looks like I had some trailing white space and was comparing to an empty string on one of my tasks. 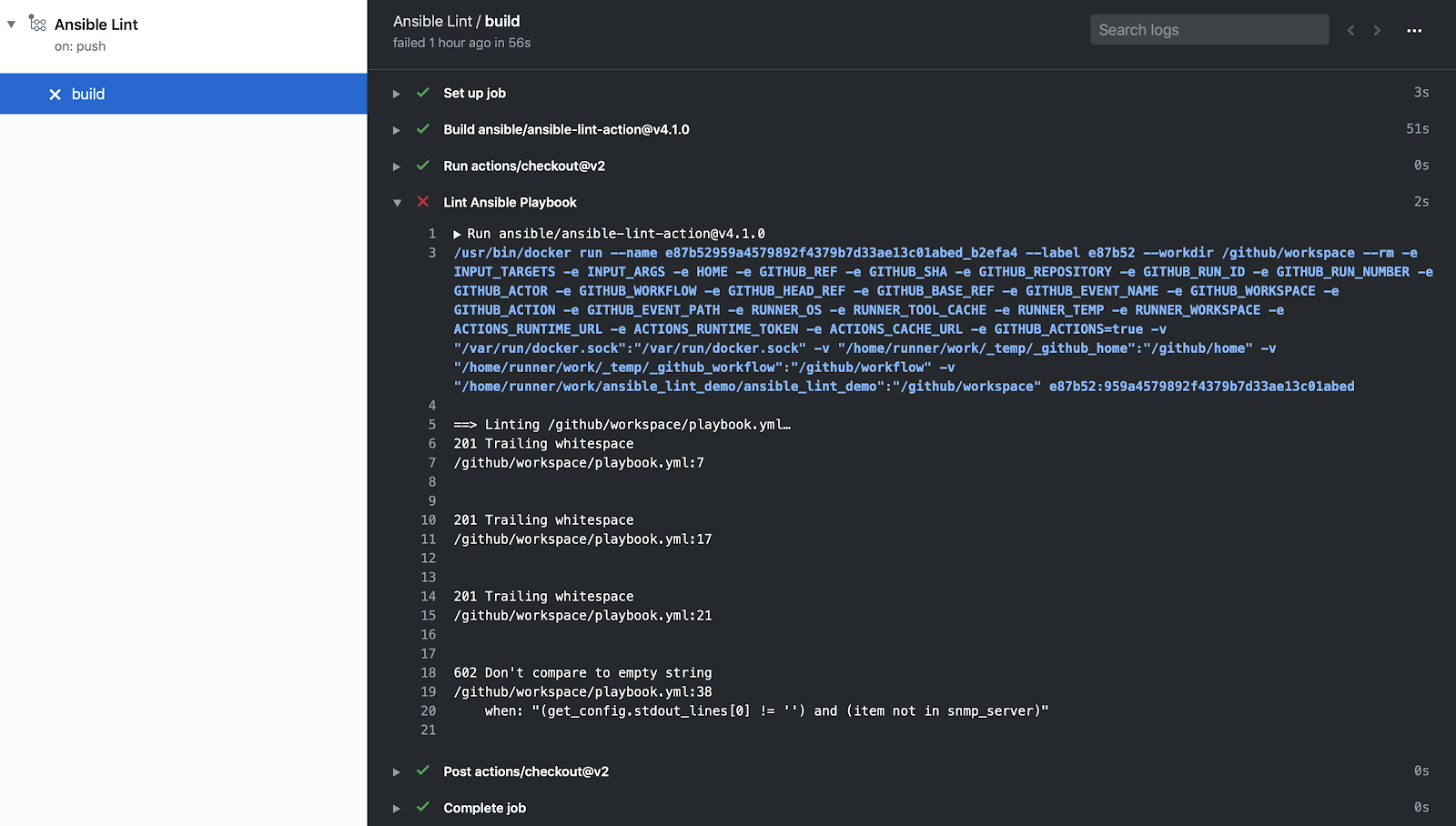 Will I get an email notification?

I received an email notification as well, letting me know it had failed. 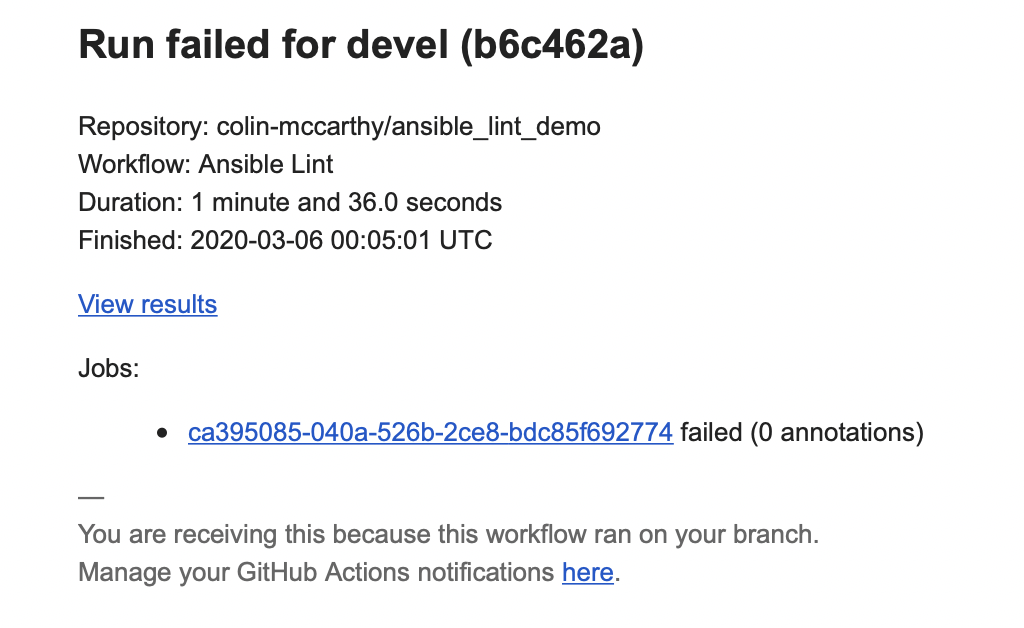 To use the action simply create an Ansible Lint.yml (or choose custom *.yml name) in the .github/workflows/ directory. 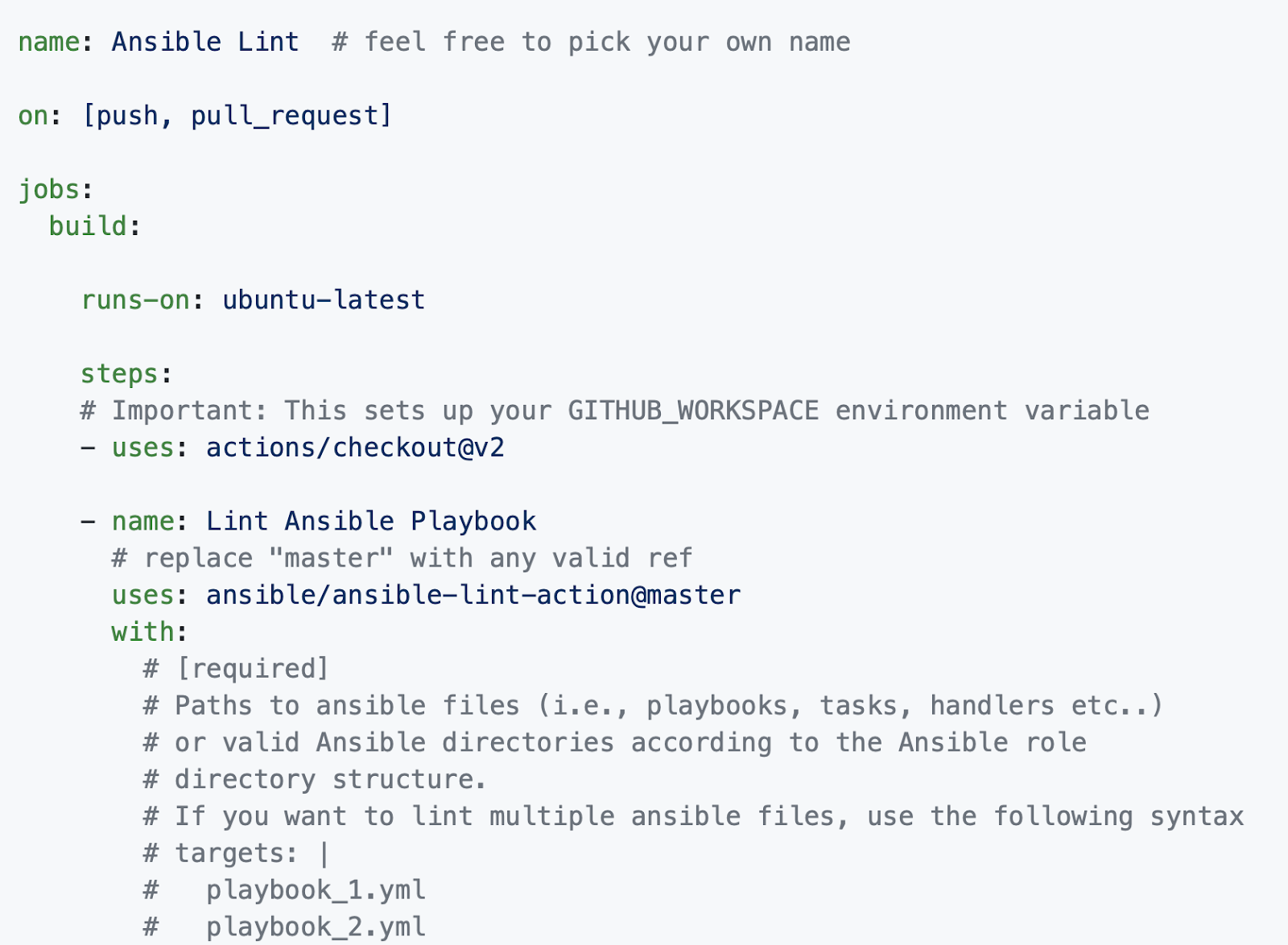 So here is the really cool part, you can run the action on various events! This means every time someone submits a PR, or does a push, the action will be triggered and a container will spin up and run Ansible lint on your repo. You can define what events will trigger the action using the on: parameter.

I would like to go a little deeper into linting by bringing up pre-commit hooks.

Pre-commit hooks are little scripts run locally on your machine that can help identify issues before submission for code review. When talking about the Ansible Lint action, it would really come in handy to lint the code before you submit your pull request. This would make sure you always pass. The GitHub action would just serve as the final step that guards the shared repo. If you are using pre-commit hooks you should hypothetically never fail the GitHub action test.

To set this up on my MacBook I simply did a pip install.

To set it up on your repo just make sure you…​

To use Ansible Lint with pre-commit, just add the following to your local repo's .pre-commit-config.yaml file. Make sure to change rev: to be either a git commit sha or tag of Ansible Lint containing hooks.yaml.

Once you set up your action, Github will give you a snippet of markdown code you can add to the README.md displaying the linting status of your repo. A badge for your repo to show if it is passing the linting test. 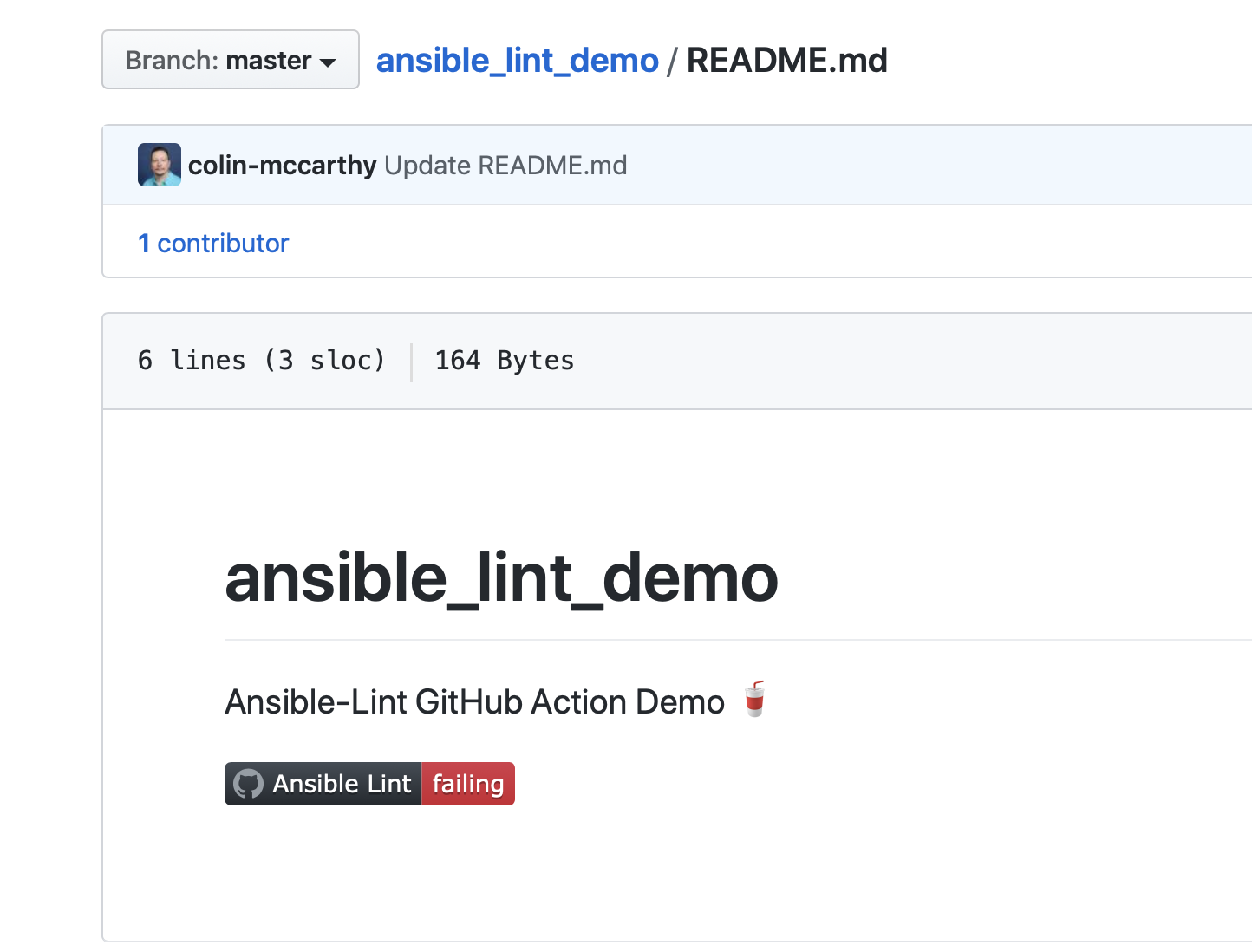 After removing the trailing whitespace and fixing all issues my PR is showing “All checks have passed” and my badge is showing passed. 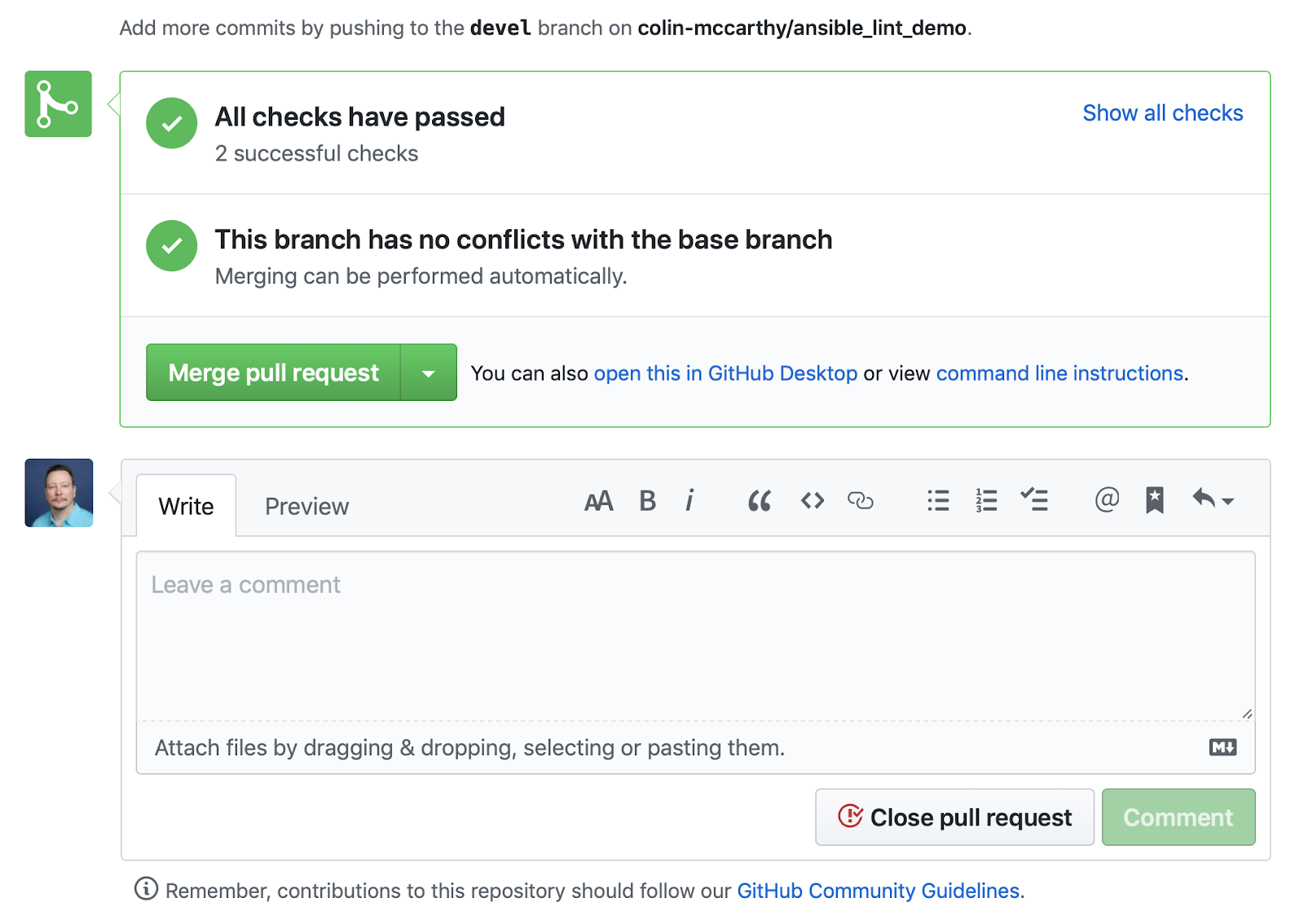 Enforcing linting on code changes can build trust that your code is following best practices. Hopefully, you can try and add some linting to your Ansible repos with GitHub Actions or pre-commit hooks. Setting up this action was a lot of fun and I especially like the badge that was provided. 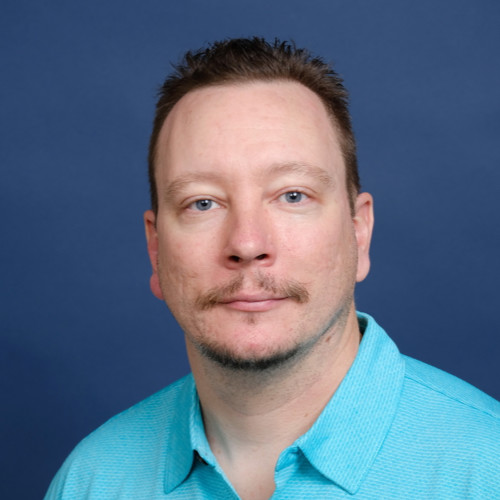