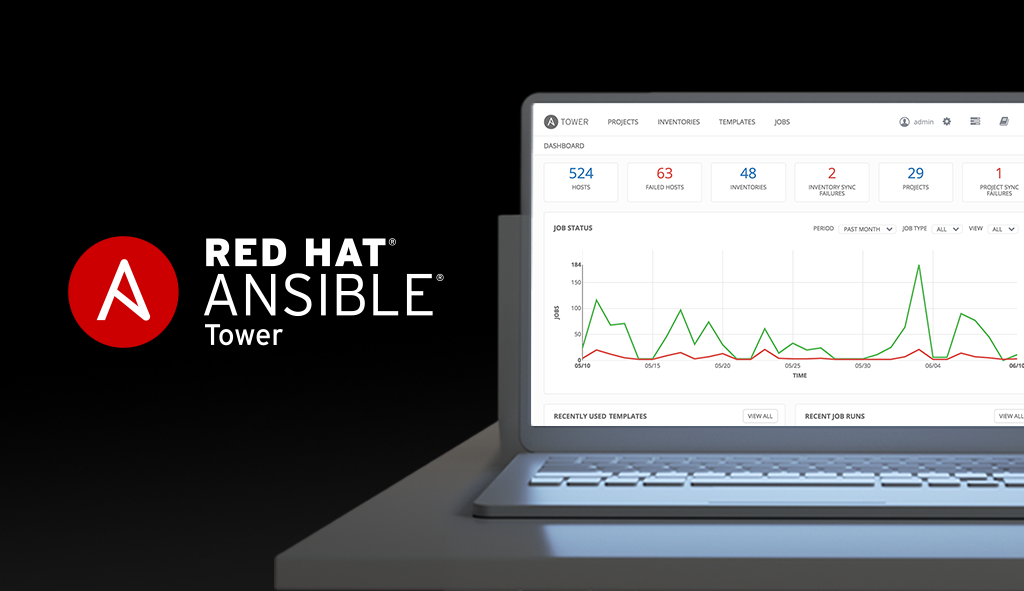 As we continue to improve Red Hat Ansible Tower, we’ve focused on allowing you to automate in more flexible ways, no matter your deployment scenario. As part of this, we’ve introduced two new features: Instance Groups and Isolated Nodes. These new features allow you to use Ansible Tower automation more flexibly in ways that match both the structure of your organization and your infrastructure.

What is an instance group?

However, this just gives you an additional mass of capacity. If you just have one group using a Tower instance, that may be enough. But we know that many Ansible Tower instances are shared among teams, groups, and organizations that may have different uses for their automation.

That’s why, in Ansible Tower 3.2,  we created Instance Groups.

Instance Groups are set up in the inventory file used by the Ansible Tower setup playbook.

To define an instance group named Grouper, just create a [instance_group_Grouper] group in the inventory, and define what Tower nodes should be in that group.

You can create as many instance groups as you need, and put nodes in as many different groups as needed, as long as at least one node exists in the base [tower] group. Note that all job events from running jobs are processed by the [tower] group, so the number of nodes in the [tower] group does need to scale with your job load even if it is not being used for direct job execution.

Once you’ve configured and installed your instance groups, you can view their status under Ansible Tower Configuration. 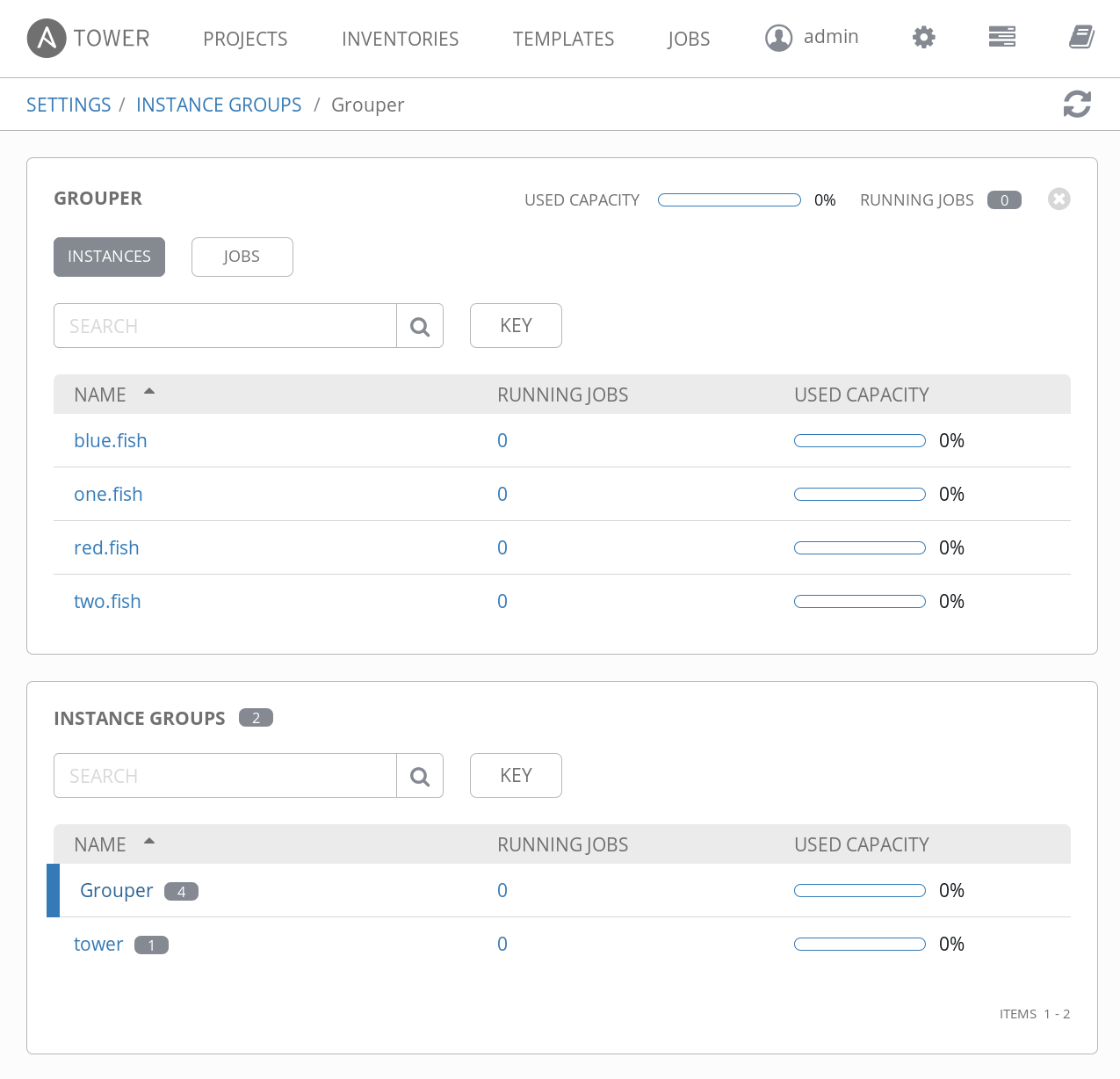 The status of instance groups can also be retrieved from the Ansible Tower REST API at /api/v2/ping:

If not specified, an org/inventory/job template will use the [tower] instance group.

Let’s look at how this can work in practice.

In this case, you can set up three instance groups for each team to use in their environments. These instance groups can share some nodes with the main [tower] group, so you can have shared global capacity, while each having some dedicated capacity.

We can then associate each instance group with the appropriate inventories…in this case, using the REST API and tower-cli:

You may also have a situation where you don’t care as much about capacity separation across your groups…execpt for that emergency security patching you need to do when new CVEs appear. The following inventory setup sets up an emergency patching server.

We then associate this directly with our job template that we use for emergency patching:

What is an Isolated Node?

Many people use Ansible to manage far-flung, complex infrastructures. They can have machines and networks in multiple datacenters, servers behind firewalls or in VPCs, or remote devices where unstable links may not survive the length of the job. In all these cases, it can be simpler to run automation local to the nodes.

To solve this, we created Isolated Nodes.

An Isolated Node is an Ansible Tower node that contains a small piece of software for running playbooks locally to manage a set of infrastructure. It can be deployed behind a firewall/VPC or in a remote datacenter, with only SSH access available. When a job is run that targets things managed by the isolated node, the job and its environment will be pushed to the isolated node over SSH, where it will run as normal. Periodically, the master Ansible Tower cluster will poll the isolated node for status on the job, updating in as close to real-time as possible. When it finishes, the remote execution on the isolated node will be cleaned up, and the job status will be updated in Ansible Tower.

Isolated nodes are also set up in the inventory file used by the Ansible Tower setup program. Isolated nodes make up their own instance group. For example, if we've got a remote fortress that we want to set up isolated nodes to access,  create the following:

Isolated groups can be seen in the same screens that show instance groups and Ansible Tower cluster configuration.

Like other instance groups, isolated node groups can be assigned at the level of an organization, an inventory, or an individual job template.

Let’s see how you might use these in practice.

Say you’ve got a central office in Chicago and a large number of remote offices. Managing this with Ansible Tower Isolated nodes is easy. Just put an isolated node in each remote location and use it for inventories located there.

In this case, we're managing inventory in these remote offices, so we'll assign the isolated groups at the inventory level.

Again, you’ve got multiple teams with multiple environments. But each one is secure in its own VPC, and you don’t want to open all the infrastructure in your VPCs to your Ansible Tower cluster. With isolated nodes, you can put a node in each VPC to handle automation for those environments. That way you only need to allow SSH to the isolated node, while the rest of the VPC remains isolated.

Tying It All Together: A Global Ansible Tower Deployment Example

With the combination of instance groups and isolated nodes, you can build a flexible Ansible Tower deployment for availability and redundancy.

For this example, let’s assume a enterprise with three locations - a local datacenter, Amazon AWS, and Microsoft Azure. In each of these, they have development, test, and production environments. In this setup, we want to run all automation through isolated nodes.

If we were to visualize how this deployment looks, it would look something like this: 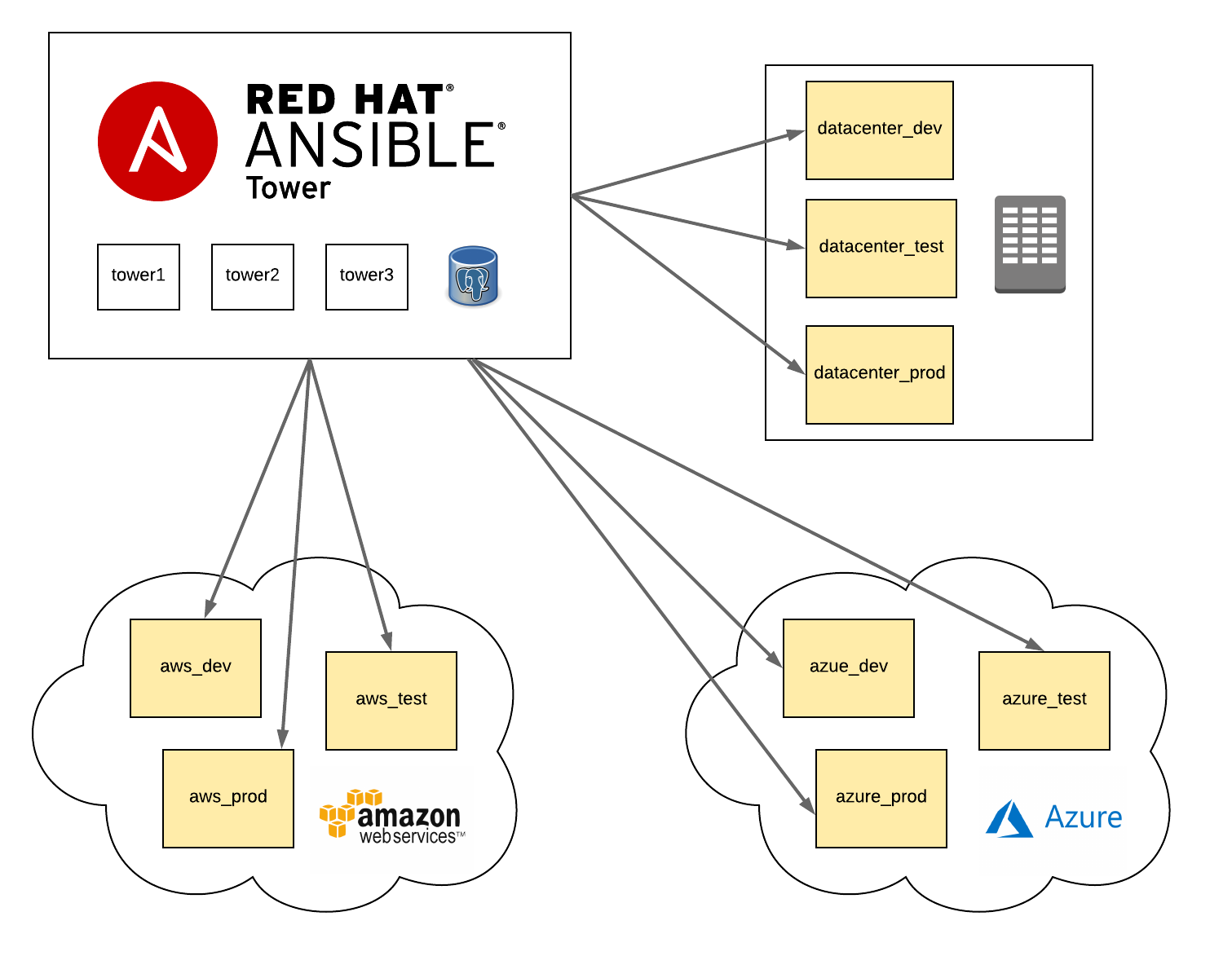 You’ll that the Ansible Tower cluster is not shown as being in one of the datacenters or clouds. That’s because with this sort of deployment, it actually doesn’t matter where Ansible Tower is located - it can be in any of the locations. As long as it can reach the isolated nodes, Ansible Tower can be hosted wherever makes the most sense. It can even be migrated between locations without any need to change how playbooks are run - if it needs to be failed over to a secondary Site B, nothing needs to be changed in how automation is defined and managed.

For more information on these topics, please see the Ansible Tower documentation.

To get started with Ansible Tower, go to ansible.com/tower-trial.