Two-Factor Authentication (2FA) is an additional layer of security that can be used to help protect enterprise applications from unauthorized access. While OAuth, and even some LDAP configs are viable options to enable 2FA in Ansible Automation Platform, users prefer to leverage Security Assertion Markup Language (SAML) for this purpose, as described in Using two-factor SAML with Red Hat Ansible Tower. On the other hand, 2FA to managed machines is discouraged. 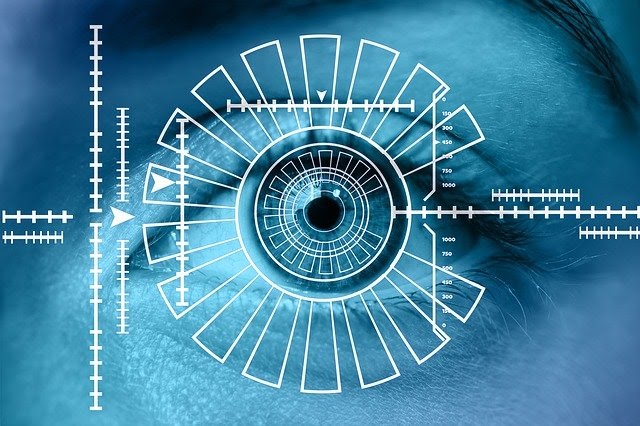 SAML is an open standard that allows Identity Providers (IdP) exchange authorization credentials with a Service Provider (SP). The IdP supplies an XML document—known as assertion—to the SP to deliver a series of attributes that identify the login user.

The goal of this example is to map users from four different groups (Alpha, Beta, Gamma and Delta) to either the Cloud or Network Organization in Ansible Tower, and make them part of a specific team (Engineering or Operations). Ansible Tower is the control plane for Ansible Automation Platform and includes a webUI and RESTful API. 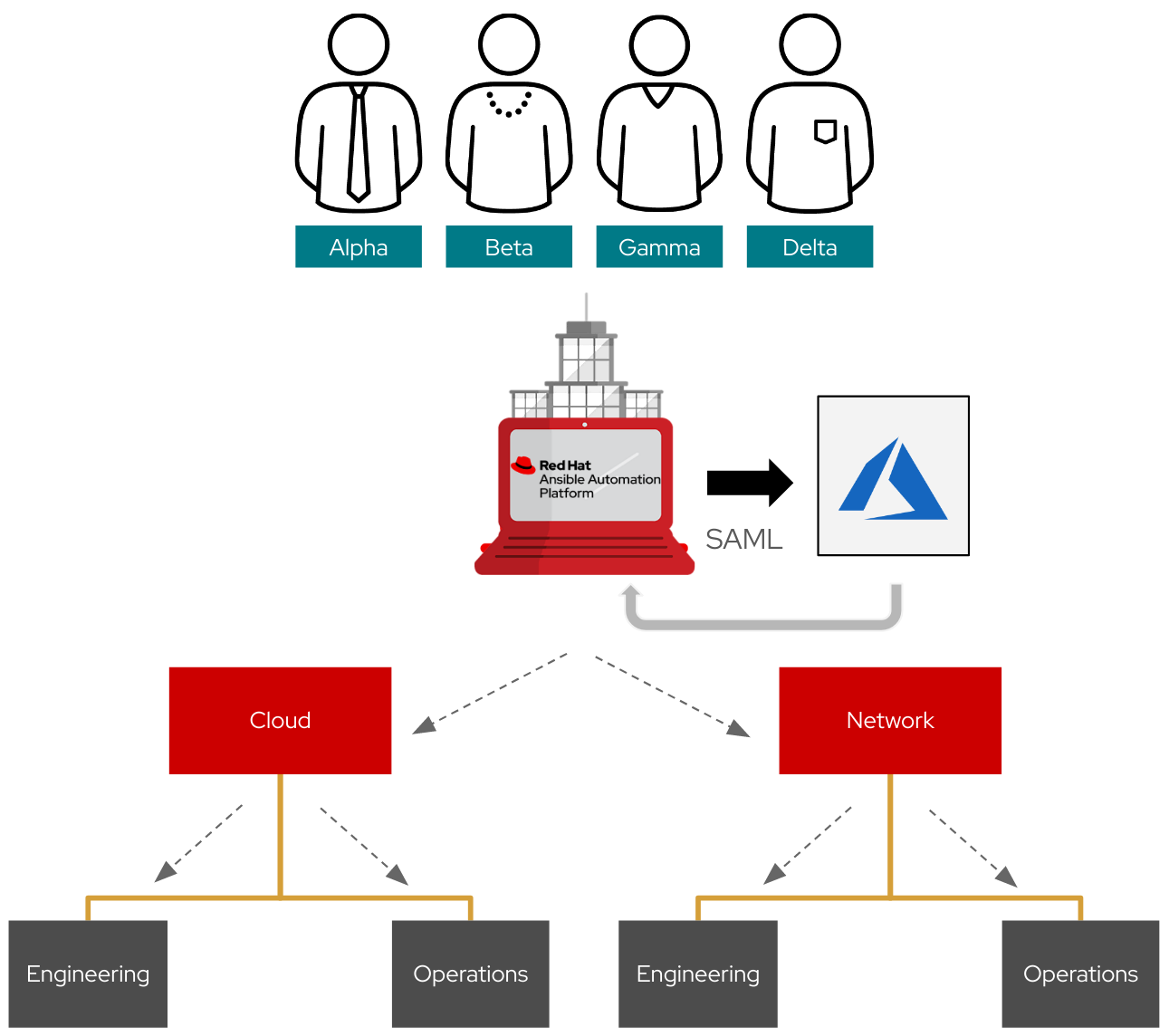 The IdP in this example is Azure’s Active Directory where four test users are set up: Test 1, Test 2, Test 3 and Test 4 to validate the different team and organization combinations in Ansible Tower.

Each user is a member of a different group.

These users need to be enabled to use SAML in Azure’s Active Directory. Go to Enterprise Application > Azure AD SAML Toolkit > Users and groups.

Next, the attributes that identify the login user should be defined. A number of them are included by default in Azure’s Active Directory. Group and organization are the only two that were manually added from the capture below.

Claim the Group ID as an attribute

The attribute group was added by clicking edit in User Attributes & Claims. 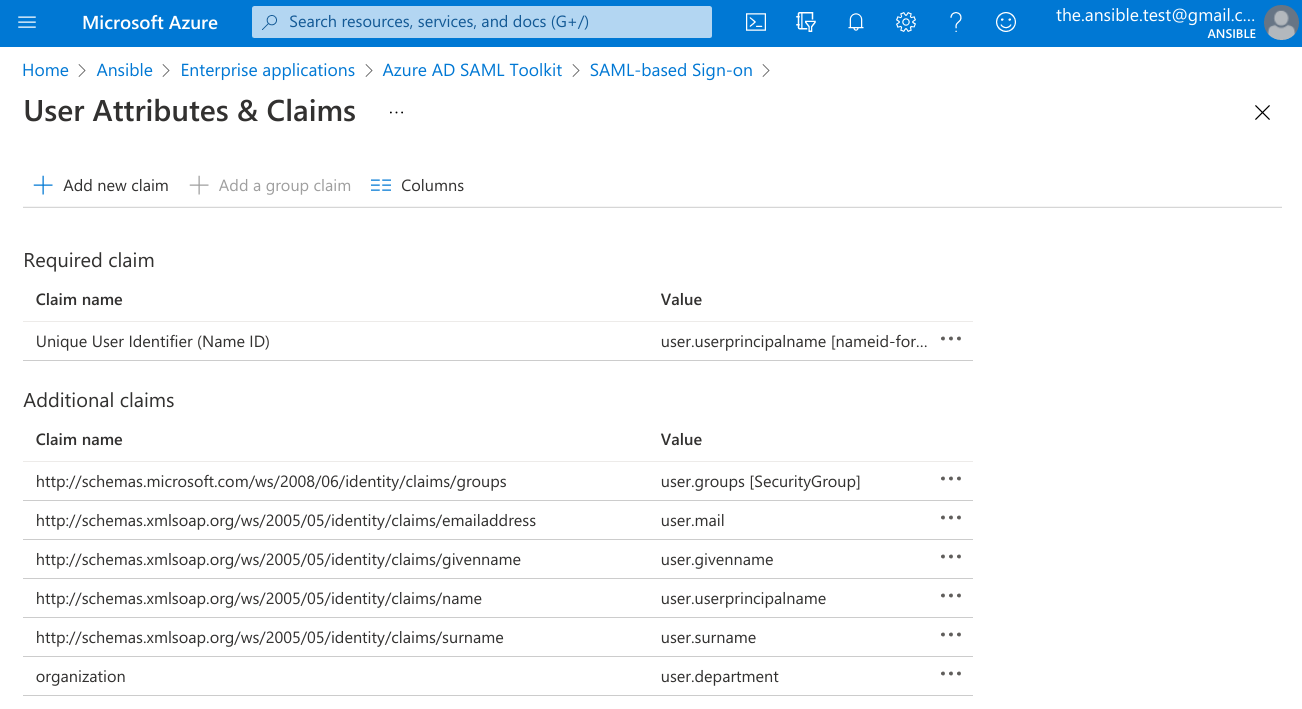 The attribute “http://schemas.microsoft.com/.../claims/groups” is mapped to the Group ID of the group(s) the user is a member of (or Object Id as displayed in the groups table). 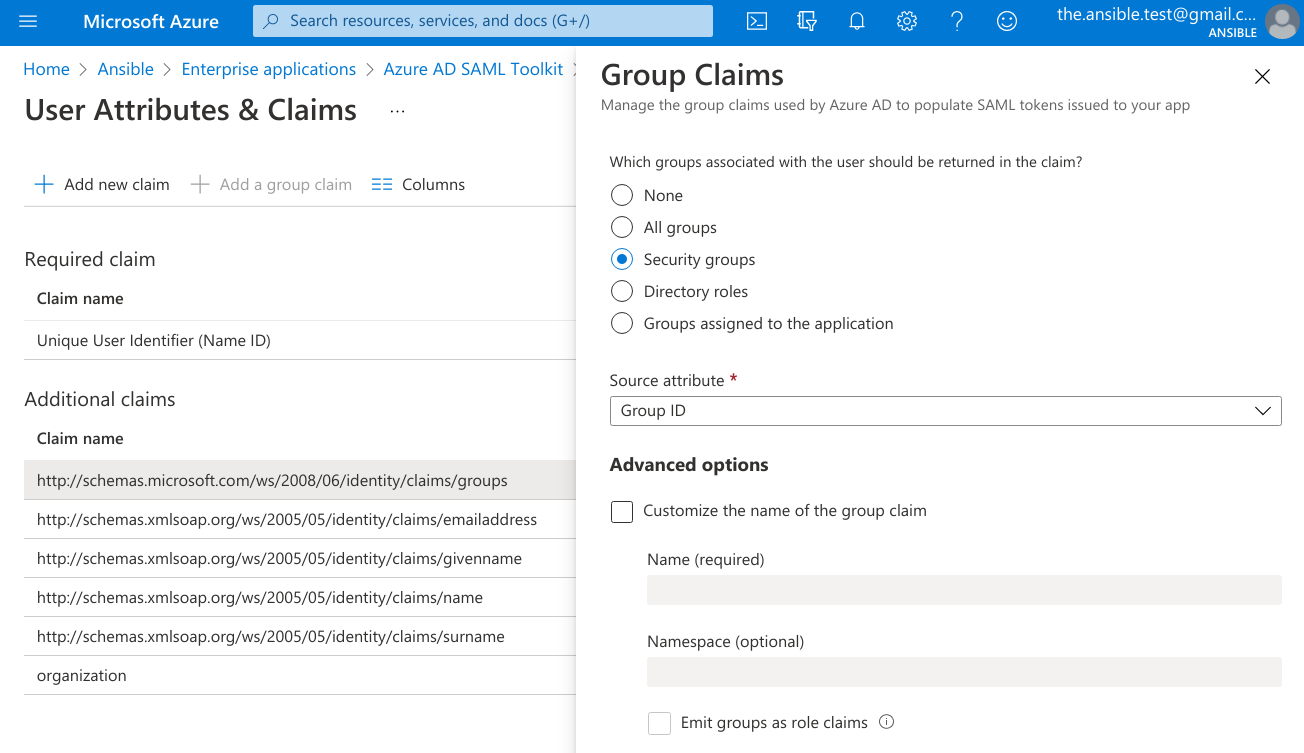 The organization attribute is mapped to the department in Active Directory of the user.

With the IdP setting is ready, it’s time to look at the SP, i.e. Ansible Tower. The SAML config can be found in Settings > Authentication and click on the SAML tab.

The following SAML sections need to be configured.

These values identify the Ansible Tower instance that acts as the service provider.

The information for this section can be found in Azure’s Active Directory. 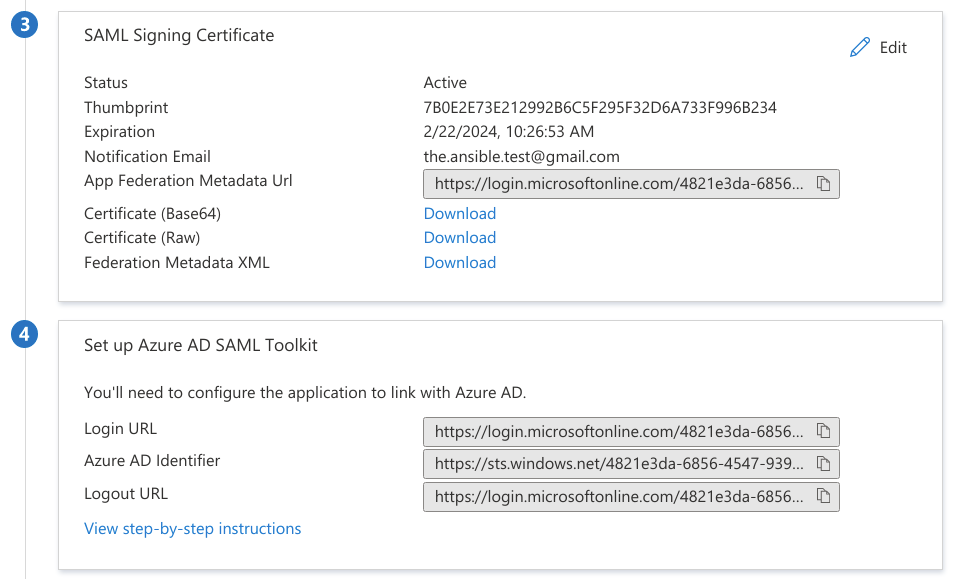 Both users and teams can be members of an organization. We use the organization mapping attribute configuration to tell Ansible Tower what organization users belong to.

In this example, an attribute with the name organization, which in Azure’s Active Directory maps to user.department per our configuration, determines which organization the user will be placed in Ansible Tower.

In this section, a specific value of a SAML attribute derives the user’s team placement and to which organization the team belongs. The attribute selected is defined with the key saml_attr, in the example: “http://schemas.microsoft.com/.../claims/groups”.

As a result, user Test 4, which is a Delta group member in AD (group with Object Id = d80919f6-7...), maps to the team Operations in the Network organization.

The user will be redirected to Azure for authentication. 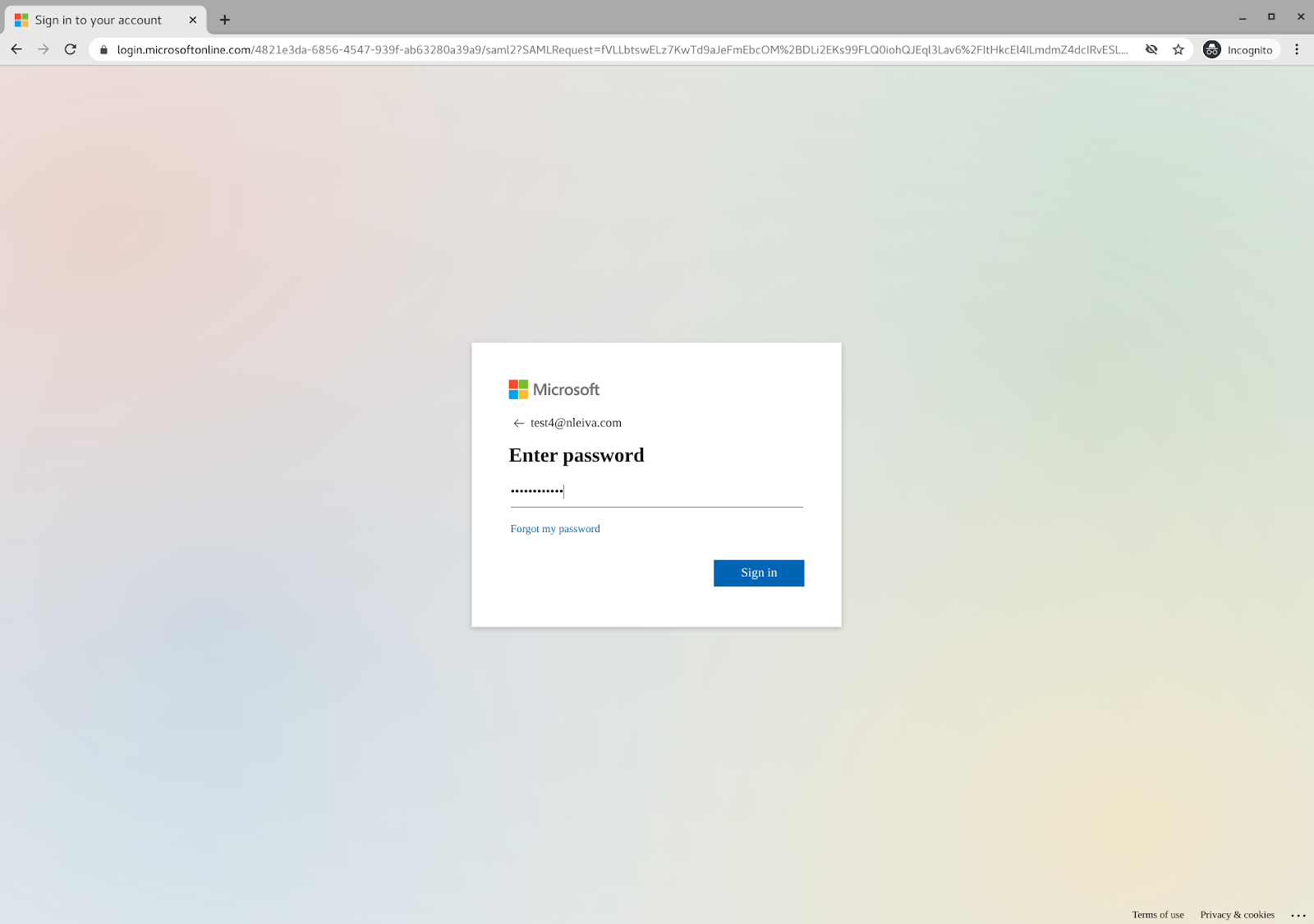 Two-factor authentication (2FA) will then kick in.

After approving this request with our mobile device, user Test 4 can access Ansible Tower. This user is now a member of the team Operations.

This team is in the Network organization.

Optionally, the user by itself can be also made part of the Organization.

If you'd like to dive deeper, take a look at:

Do you need a trial of Ansible Automation Platform? Go to red.ht/try_ansible. 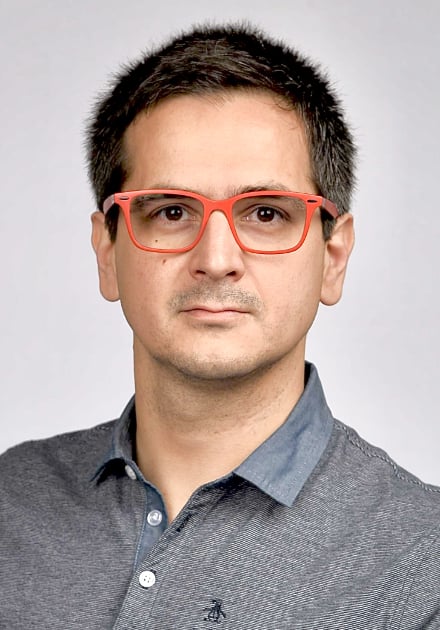