Sean Cavanaugh, Anshul Behl and I recently hosted a webinar entitled “Migrating to Ansible Collections” (link to YouTube on-demand webinar replay and link to PDF slides download). This webinar was focused on enabling the Ansible Playbook writers, looking to move to the wonderful world of Ansible Collections in existing Ansible 2.9 environments and beyond.

The webinar was much more popular than we expected, so much so we didn’t have enough time to answer all the questions, so we took all the questions and put them in this blog to make them available to everyone.

I would like to use Ansible to automate an application using a REST API (for example creating a new bitbucket project). Should I be writing a role or a custom module? And should I then publish that as a Collection?

It depends on how much investment you’d like to make into the module or role that you develop. For example, creating a role that references the built-in Ansible URI module can be evaluated versus creating an Ansible module written in Python. If you were to create a module, it can be utilized via a role developed by you or the playbook author. Sometimes a standalone role may be preferred, depending on the exact functionality or requirements for interfacing with the REST API endpoint. Overall it is important to keep a clean resource/module mapping, and avoid as much as an operation/module. There is no right or wrong answer here unfortunately (“it is in the eyes of the Ansible beholder”), regardless an Ansible module and/or an Ansible role can be developed and then included into a Collection for use in Ansible playbooks.  Collections are the standard way for distributing Ansible Content, which includes both roles and modules.

When will we be able to install Collections using a requirements.yml file in an offline environment? Roles seem to work with Git repositories as upstream, but for Collections, it does not seem to work yet and I always want to look online to galaxy.ansible.com. That is, can I use a GitHub URL (like in roles)?

You can point the ansible-galaxy CLI client to pull Collections from different sources, please check out the following documentation page. Please note that pulling Collections from GitHub (or other sources) would not be officially supported as part of the Ansible Automation Platform. It would be best, even with using Community Collections, to install from Ansible Galaxy.

Certain modules require additional Python packages, for example pyvmomi for VMware modules. Will Collections at some point be able to include this Python code to make it work?

In the future we will have a containered technology called Ansible Execution Environments, which is an abstraction layer above Collections, allowing for operating system-level components to be installed. There were some talks about this at AnsibleFest, and a blog talking about Ansible Builder, but the current answer is venv's but Soon(tm) will be Execution Environments.

When will ansible-doc be able to show docs for a Collection? Using ansible-doc with a FQCN does not work yet.

ansible-doc works FQCN currently; check the verbose logs to see if there are some issues discovering the Collection by ansible-doc.
For example, the following command does function properly:

How will Ansible Execution Environments work together? Guess this isn't really part of the webinar :)

This topic is in a very active development stage at the moment and will be covered in upcoming blogs, webinars, and docs. Coming soon, but watch this space for more information.

Any particular resources for network automation? I have been struggling to create playbooks on non-standard network devices. I just feel that the online documentation is lacking from the network side.

Check out our Network Getting Started guide. The current Ansible connection plug-ins (like network_cli, netconf and httpapi) have enabled over 75 networking platforms to date. Also, using the cli_command and cli_config, generic modules could be of help. Take a look at github.com/ansible/workshops and see if that helps your searching. Also, reaching out to the network device vendor directly may help, as they may have private Ansible content available.

When will Ansible 2.10 be available for Red Hat Linux via yum?

Ansible 2.10 will not be made available in RPM format downstream, please refer to the following link for more details: https://access.redhat.com/articles/5392421.

When would Collections be a hard requirement and deprecating the old way (2.9 or earlier)?

2.10 and newer require Collections, but if there was existing content in 2.9 migrated out, the current playbooks should just work as they are utilizing the global runtime.yml file as part of the 2.10 distribution. Hence why we are focusing on 2.9 + Collections to elongate the transition process.

To future proof can I implement this to 2.9 and use FQCN?

Yes, that should be fine, assuming the Collections were either migrated from Ansible 2.9 or tested against it if net-new.

You can also just put collections: cyberark at the top of the playbook, right? Can you show what that looks like? 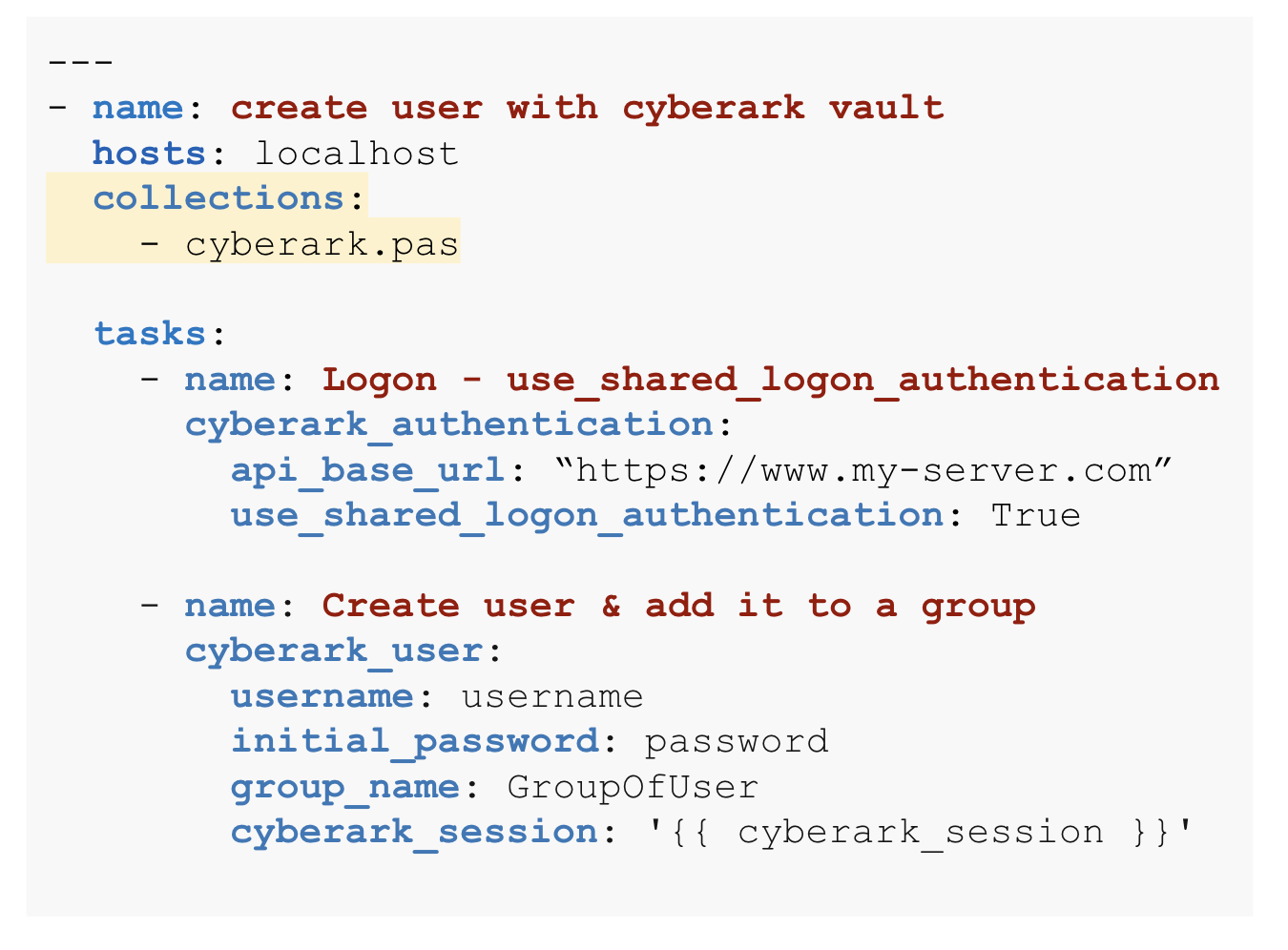 In our environment, we have customers that rely on cli's as the cli's get developed faster, example aws-cli. Do we anticipate vendors like AWS to contribute faster to the Collections side?

The Ansible Engineering team actually maintains all AWS Ansible content, and typically have a “CLI First” or “API First” mentality, but in general, participating vendors have been great about updating their Collections for new features!  One of the goals of Ansible Collections was for partners and certified content to move faster and asynchronously from Ansible Automation Platform releases, which means both the community and customers will get new content faster.

What site licenses are needed for access to Automation Hub?

When is the Ansible Execution Environment scheduled to be released?

Tentatively the middle of next year (2021) as part of the product, but the pieces will start becoming available in an ongoing fashion upstream.

If all the modules are being moved out into Collections (ansible.builtin, etc.), what is still part of the Base/Core?

Well a few modules will still be in there, hence “builtin,” but those still might move async. But there is a lot of code running the actual Ansible executable including how we do parallelism, constructs like conditionals, loops, blocks, etc, and much moren. Many of which are things that a lot of Ansible users don't really interact with (think of it like an engine in your car).

Is it possible to use multiple versions of a Collection within the same codebase? (ie list the version on the playbook level)

That is not an option currently, you cannot pin the Collection version in the playbook, this will most likely be ideal when using a venv or future execution environments.

Can the private Automation Hub be a repo in a binary repo like artifactory or nexus?

No, private Automation Hub leverages the same content types in cloud.redhat.com. Ansible Collection tarballs built and published to Automation Hub are decompressed and contents are shown.

Could I use Ansible Collections on CentOS8?

If Ansible 2.9 is installable on CentOS8 (or any other Linux distribution), then Collections can be utilized there.

Would Galaxy be deprecated or still working in the future?

Galaxy is still the current place to publish and download Community Ansible Collections!

Is the private Automation Hub standalone or can it be clustered?

It’s currently only available as standalone, but may be cluster-enabled in the future.

How does the FQCN use the Collection and not the regular mapped module (in 2.9) ?

FQCN stands for fully qualified collection name and it will always point to a Collection and not a module inside the standard Ansible 2.9 installation, as they reside in different locations on the Ansible control node.

What's the difference between Execution Environments and the Container Isolated Groups which are in tech preview in Red Hat Ansible Tower?

Is there a means to download the :latest Collection version?  Or is that what you get automatically?

Latest version is pulled automatically, but you can specify the exact version as well. You don't need to use :latest - that's what you get automatically, assuming it doesn't have something like "-beta" or prerelease versions (using hyphens) as part of it, which are not considered GA releases (and skipped).

For roles we write ourselves, is there or will there be a way to organize related roles as a Collection?

Multiple roles can be organized inside a Collection today as part of the /roles directory.

Everything I've seen about Collections has been how to use ones (from Galaxy or other sources). Is there any documentation/reference about how to write our own Collection?

Yes! Check out the Developer Guide on docs.redhat.com.

Will Automation Hub contain the official/prominent vendor modules. An example is a NetApp or Dell module.

Yes, it already contains that today, we have a certification program and we have certified content from a lot of vendors like Dell and Netapp. Automation Hub contains all supported and Certified Collections, there is a public KBASE that lists them, please check https://access.redhat.com/articles/3642632.

If I choose to take a trial of Ansible Automation Platform, will it allow access to the Automation Hub?

Yes it will as part of the subscription; an Ansible Automation Platform subscription includes everything to trial, including all components and connectivity to services on cloud.redhat.com, and the Red Hat Customer Portal. To get a trial sign up at red.ht/try_ansible.

Is deleting a Collection from ansible-galaxy CLI coming soon, or do we still have to go into the Collections directory to manually delete it?

Can we install the Collection somewhere besides the default - ~/.ansible/collections?

Yes, you can put them anywhere, but make sure the control node knows where they are in the path. For example: ansible-galaxy install -p /path/to/collections namespace.collection and associated documentation.

Can I check the version of an existing Collection on my server?

For adding a new host in RHV, I had to downgrade the last ansible version to 2.9.13 otherwise it did not work (a known bug by Red Hat). In which 2.9 version will the bug be solved?

Do you have a GitHub issue we can see? We can make sure to follow up. Bugs are usually tracked on GitHub Ansible project and the conversations there should help you understand a timeline.

What's the future path for users that have absolutely zero interest in things changing? I have been working toward changing department culture toward an automation friendly way of thinking for a year or two, and this will effectively put me back to square one, if not further back. Change resistant businesses don't like big changes just as they get ready to implement.

We think we have created a win/win scenario where customers and community members can now use Collections and get new content faster, while maintaining backwards compatibility with existing Ansible Automation.  While we encourage folks to start using Collections and writing Ansible playbooks with FQCNs, there will be a long period of time before customers are required to use them.  Red Hat does offer long term support options/offerings, so you are not forced to change for considerable time. Ansible 2.9 will be supported much longer than originally planned, for subscribing customers.

Is there a set of paths that Ansible will check for runtime.yml defined in base ansible?