Peeling back the layers and understanding automation mesh

To quickly summarize both Craig’s blog post and our documentation, we separated the control plane (which includes the webUI and API) from the execution plane (where an Ansible Playbook is executed) in Ansible Automation Platform 2.  This allows you to choose where jobs run across execution nodes, so you can deliver and run automation closer to the devices that need it. In our implementation, there is four different types of nodes:

Before we get started, here are two great pieces of documentation that cover networking ports for automation mesh:

While every port that Ansible Automation Platform uses are configurable, the default network ports used to deploy and connect automation mesh are:

For the purposes of this blog post, I am going to use a single site from the reference architecture linked above.  Here is picture of just Ansible Site 1: 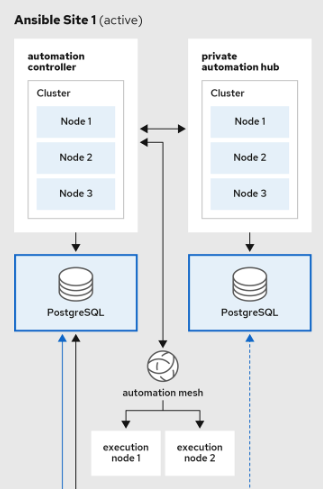 In the above diagram you can see that there is an automation controller cluster containing three cluster nodes and two execution nodes.  In this particular example there is no hop node.  The way to set up automation mesh is via your inventory file of the Ansible Automation Platform installer.  The installer uses Ansible (we drink our own champagne!) to install and configure the overlay network between the control nodes and the execution nodes.

Here is the relevant portion of the inventory for the Ansible Automation Platform installer that will deploy automation mesh for us.

In the above example the default values will be used since the receptor_listener_port and ansible_port are not set.  This means that Ansible Automation Platform will use port 22 to connect to the remote nodes, install the necessary files and configure the receptor daemon to listen for a connection on port 27199.

NOTE: There are multiple ways to view how your mesh network looks. You can do that before the platform install through the installer setup.sh and the following command:

This will generate a dot file which can be directly opened in a browser or fed to an online dot file viewer such as this one to see the topology.

Mesh topology view for the above inventory file

In addition, Ansible Automation Platform 2.2 introduced a new feature called automation topology viewer, which can show the mesh network in the automation controller once the platform installation is done. Read more about it here. 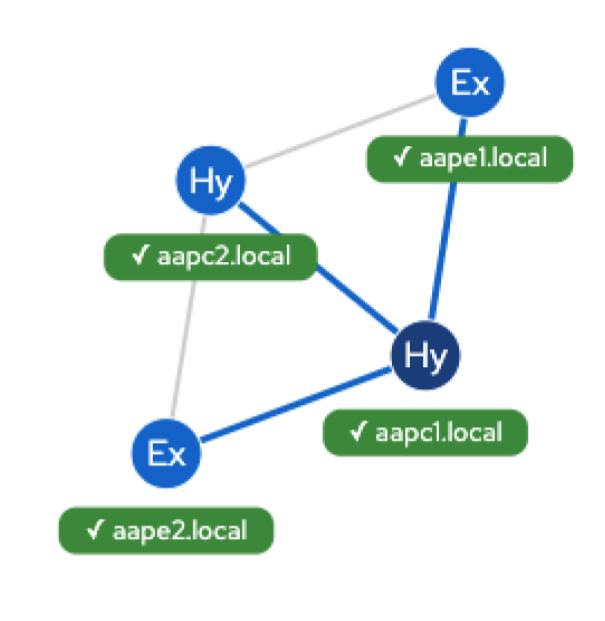 In this specific example, since the peers=execution_nodes is under the automation controller group, the connection will be initiated from the control nodes.  In this case, the outbound port is choosing a port from the Linux ephemeral port range as outlined in this knowledge base article on the Red Hat customer portal.  This is exactly how SSH behaves, where the outbound port is not set, but the listening port is using port 22 (by default).

On the execution nodes side, we will be listening on the predefined port, in this case TCP 27199.  We can see the daemon running using the systemctl command:

Using a simple Linux utility like netstat we can easily see what ports automation mesh is using on one of the controller nodes:

Here is what it looks like on one of my execution nodes:

As you can see in the above output, the controller side has only outbound connection from random ephemeral ports, while the destination is port 27199.  While on the execution node, we are listening on port 27199 and connecting back to the controller node.

What if I want to establish connections from the execution nodes inbound to the controller nodes?

Now the connection is initiated from the execution node and the listening port 27199 is on the controller nodes.  Now what if I want to customize the port for automation mesh?

By setting the receptor_listener_port as a group_var all control nodes will now listen on 29182 instead of the default port 27199. However, in this scenario above, we are also coupling the execution nodes to each other.  The Ansible Automation Platform installer will make sure that execution node 2 is listening for that connection to be created.  Since we did not set the receptor_listener_port var, it will default to listening on port 27199.

How do I protect my automation mesh network?

When a message is initiated for automation mesh, the control node will send its .cert (which contains its public key / signed by our CA).  When another automation mesh node receives this message, it will check if we support their CA and respond with its own cert.  The control node (our initiating node in this exchange) will extract the public key and generate and respond with a pre-master key. Both nodes will generate a “shared secret” from the pre-master key and then fully encrypted communication will take place for the remainder of the connection.

If you want to use your own CA, you can follow the documentation for additional details. 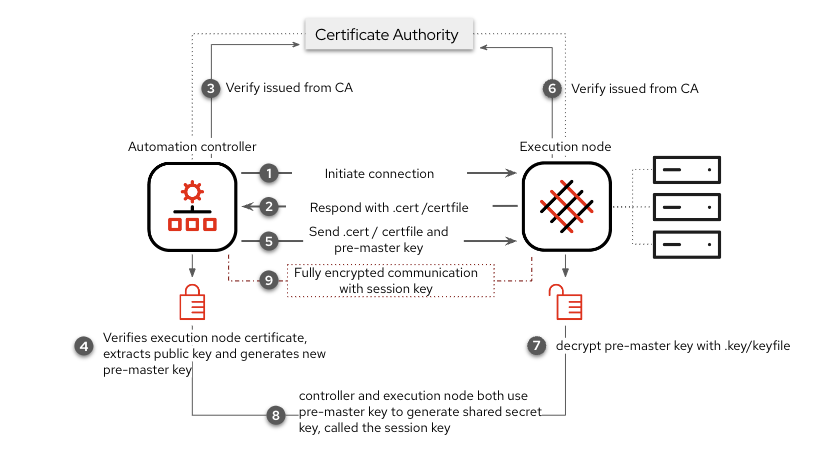 The diagram above illustrates how the TLS encrypted session is created.  This follows the standard SSL/TLS handshake method.  If you want to learn more about SSL/TLS encryption, consider the following walkthrough and overview which contains a nice handshake diagram: https://www.ssl.com/article/ssl-tls-handshake-overview

While major features for automation mesh include adding additional automation capacity and resilience, it can also act as a proxy for your automation overlay network to reach the infrastructure you are trying to automate.  Instead of having to open up ports to all your infrastructure, you can simply open up rules to allow control nodes to initiate a connection to execution nodes.  For example, look at the following diagram: 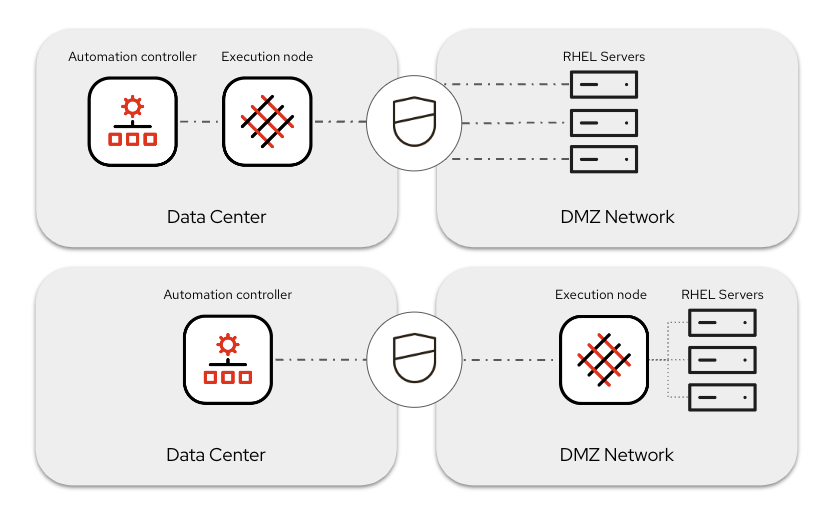 In this diagram, there are three Red Hat Enterprise Linux (RHEL) servers that we are trying to automate using port 22 (SSH) to establish a connection.  If my execution node was not in the same network as my RHEL servers, I would need to ensure that port 22 was open to each server in my DMZ (top part of the diagram). However, I can place my execution node in the same network as my RHEL servers.  Doing so enables me to only need one ACL/FW rule through my firewall per connection to that execution node (bottom part of the diagram).  If I have multiple control nodes and want to limit the connections to the execution node to one connection, I could use a hop node as shown below.

For example, in the firewall above,I can have a simple FW rule to only allow connections to my execution node to protect my DMZ network.  Note that the syntax is going to depend on the firewall or network vendor you are using (e.g. is it an AWS firewall, a Cisco IOS network switch, or a Linux firewall?)

As you can see, automation mesh is incredibly powerful.  It can add a lot of flexibility to different enterprise environments allowing IT automators to extend their automation anywhere without compromising their security.