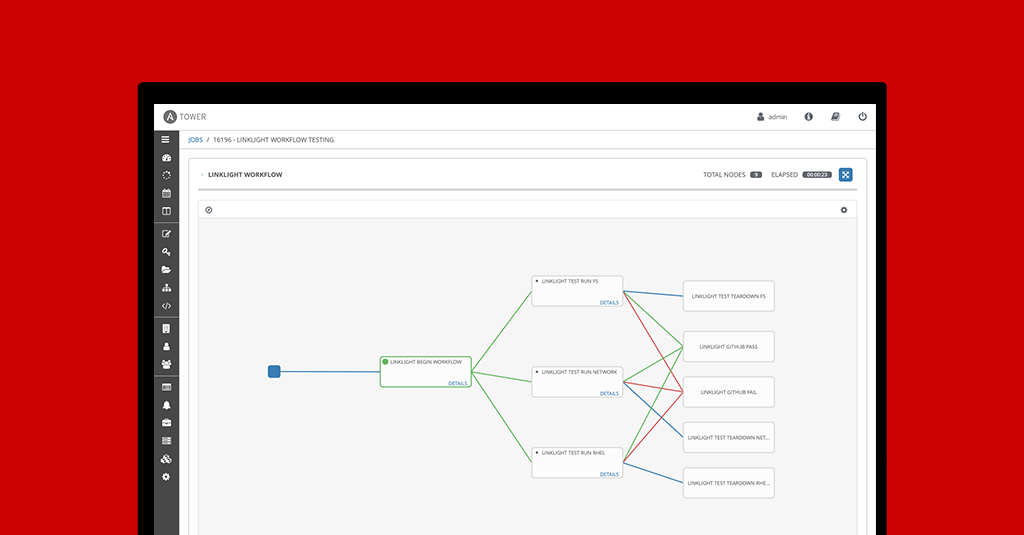 In Red Hat Ansible Tower 3.1 we released a feature called Workflows. The feature, effectively, allowed users to compose job templates into arbitrary graph trees. A simple workflow we saw users creating was a linear pipeline; similar to the workflow below.

The workflow feature also allowed branching. Each branch can run in parallel.

But something was missing. The ability to wait for previous parallel operations to finish before proceeding. If this existed, you could simplify the above workflow (see below).

In Red Hat Ansible Tower 3.4 the above workflow is now possible with the introduction of the Workflow Convergence feature.

For you computer sciencey folks, workflows are no longer restricted to a tree, you can create a DAG. More simply, we call this convergence; two nodes are allowed to point to the same downstream node. The concept is best shown through an example. Above, we have a workflow with 3 nodes. The first two job templates run in parallel. When they both finish the 3rd downstream, convergence node, will trigger.

In this blog post we will cover the changes to workflow failure scenarios, how workflow node failure and success propagate, how this affects the runtime graph and how to create a workflow that responds to ALL failures rather than ANY failures. After reading this blog post you will have an understanding for how the Workflows feature chooses to execute the graph and how to, effectively, alter the ANY vs ALL scenario using the utility playbook method.

Prior to the release of Ansible Tower 3.4 a workflow failure or success was determined by the final node’s resulting status. The workflow would get marked fail if either Install APP jobs failed.

Now workflow success or failure works more like exception handling. If 1 or more jobs spawned from a workflow results in a failure WITHOUT a failure handler, then the workflow is marked failed; else it’s marked success. A failure handler is an always or failure path emanating from a node. Below is an example of how a common failure scenario would be handled using a workflow.

Now let’s look at a slightly more complex example. In the above workflow, our intent is to run the "Install App" Job Template ONLY if both instance creation jobs succeed. However, the workflow doesn’t work like that. Instead, the "Install App" Job Template will run if either parents succeed. In the next section I will show you how to get the wanted AND behavior instead of OR.

Let’s take a look at what I’ve said above, but in more general terms. Consider child nodes with multiple parents connected by a success relationship. If any one of the parents succeed, the child node will run. Sometimes this is the wanted behavior, sometimes though you may want to run a child node only if all parents succeed. So how do we do that? To accomplish this we will create a utility Job Template that we put before the convergence node that we want to make an ALL case (i.e. before the Install App in the previous example).

In our own testing we found this Workflow Convergence feature mapped better to actual working practices, so we hope you find it as useful for your own needs. In this blog post we have gone over how workflow failure scenarios have changed to accommodate the new convergence node feature, how the run-time graph is created, and how to use and change the default workflow convergence method. I invite you to check out the other workflow enhancements we added in Ansible Tower.