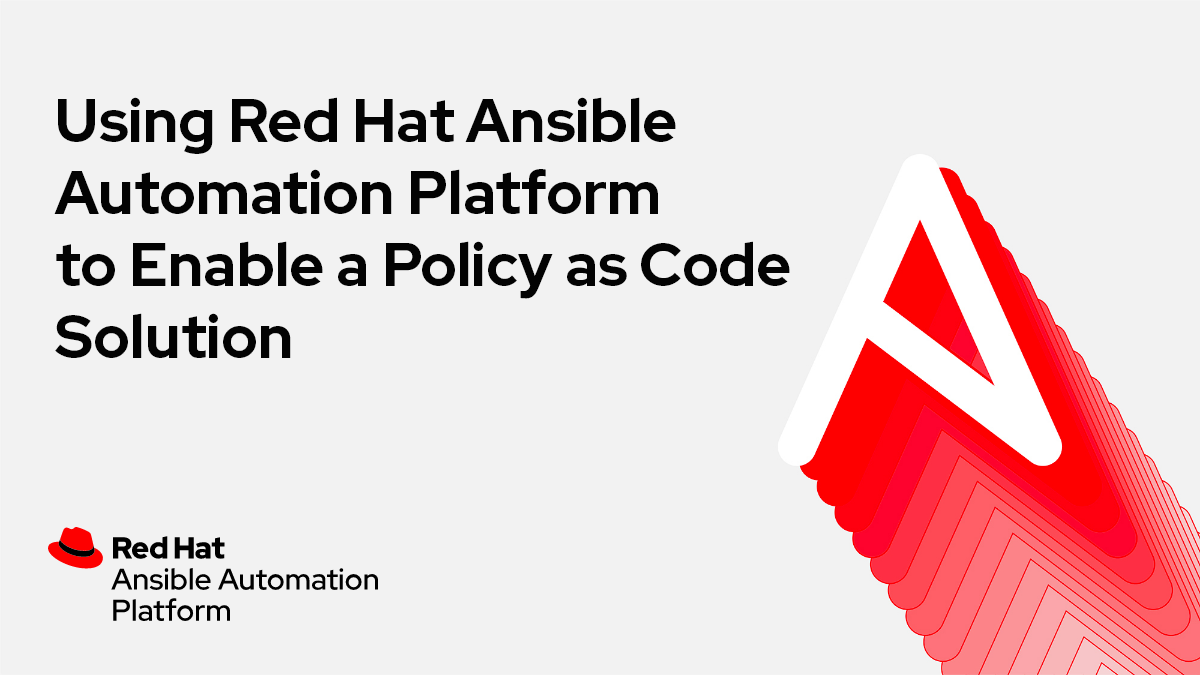 Nelson, the director of operations of a large manufacturing company, told me that he has a highly leveraged staff. That is, most of the work on the company's critical cloud project is being done by consultants and vendors, and not by their team members. Unfortunately, much of the staff’s time is spent making sure that the infrastructure as code (IaC) implementation is in compliance with the standards and policies that his company has for cloud resources. Nelson said, “Oftentimes the code works, but doesn’t conform to naming conventions, or is missing labels, or has security issues, which impacts downstream workflows and applications. We need the environment to conform to our policies, and I don’t want my staff burning cycles to ensure that this is the case.” This was the reason why he brought me in to run a proof of concept (POC). The POC would validate what would become a Policy as Code solution based on one of the common IaC products.

When the technical team and I reviewed the proof points for the POC, and it was a standard demonstration of Policy as Code capabilities, it was determined that Red Hat Ansible Automation Platform would satisfy all of the requirements and in some cases, would satisfy them much better than the product being reviewed in the POC.

Policy As Code aligns technical environments, processes and resources to agreed standards.  Many of the policies are applied by doing pattern matching or using boolean logic through a policy engine, validating the IaC.  For example, checking to make sure that none of the computing resources have a direct route to the Internet (violating a security policy), or limiting the service ports to just HTTPS and SSH.  The policy engine stores the policies and uses them to ensure the resource creation will be in compliance.  Most of the solutions allow for deny, warn or report based on compliance for business requirements of the specific attribute.  This is a simplistic use case, but there can be variations and much more complex policies requiring a greater compliance need in frequency and scale.

The proof points that were set out for Nelson’s company are the most common examples of the non-compliance issues that had been identified.  These include:

The team took a full implementation of a vendor’s IaC for building out an environment. The vendor had submitted Terraform code for evaluation, and the team needed to review the code to verify that it was in compliance. This satisfies the first three proof points listed above. This vendor’s environment included a web front end, application services and a highly available SQL server implementation.  Not overly complex, but it’s a good example of where Policy as Code needs to be used; it would normally take the staff a significant amount of time to review, update and approve as a new service.

Note: Ansible Automation Platform, Azure Resource Manager Templates and Terraform already provided IaC for this critical cloud service.  So if the Policy as Code solution couldn’t evaluate multiple IaC solutions, it would result in a lot of rework for the environment that already had a lot of time and money invested.

The POC was launched and everyone signed off on the proof points.

Now, let’s discuss how to automate Policy as Code with Ansible Automation Platform.

Shortly after the POC was organized, IBM Client Engineering reached out to see if they could help with the effort.  IBM Client Engineering specializes in doing proof points to help customers succeed.  I enlisted them to do a parallel effort using Ansible Automation Platform instead of the other product.This portion of the blog covers the combination of tasks and components that generated a successful result.

High level details of the tasks

Ansible Automation Platform was the central product being used and leveraged Open Policy Agent (OPA). OPA is one of many offerings  that enable a Policy as Code solution. Even though the environment was set up in Azure, nothing limits this effort to Azure. The solution would work the same for any datacenter, cloud service provider or hybrid cloud model. Similarly, the code and work was done in GitHub, but any GitOps service would provide the same functionality.  It would take a technical difficulty of  medium to senior level experience to build this from scratch with Ansible Automation Platform and open source.  The beauty of this solution is that it combines Policy as Code with automation to provide capabilities that go well beyond the customer’s expectations.

Overview of the solution

All of the proof points can be demonstrated using Ansible Automation Platform to automate Policy as Code.  For more information or a demonstration, reach out to the author of this blog.  The beauty of using Ansible Automation Platform is that it works with any IaC solution and can be used by most consumers of IaC.  The images below is based on the results of building and satisfying the POCs. 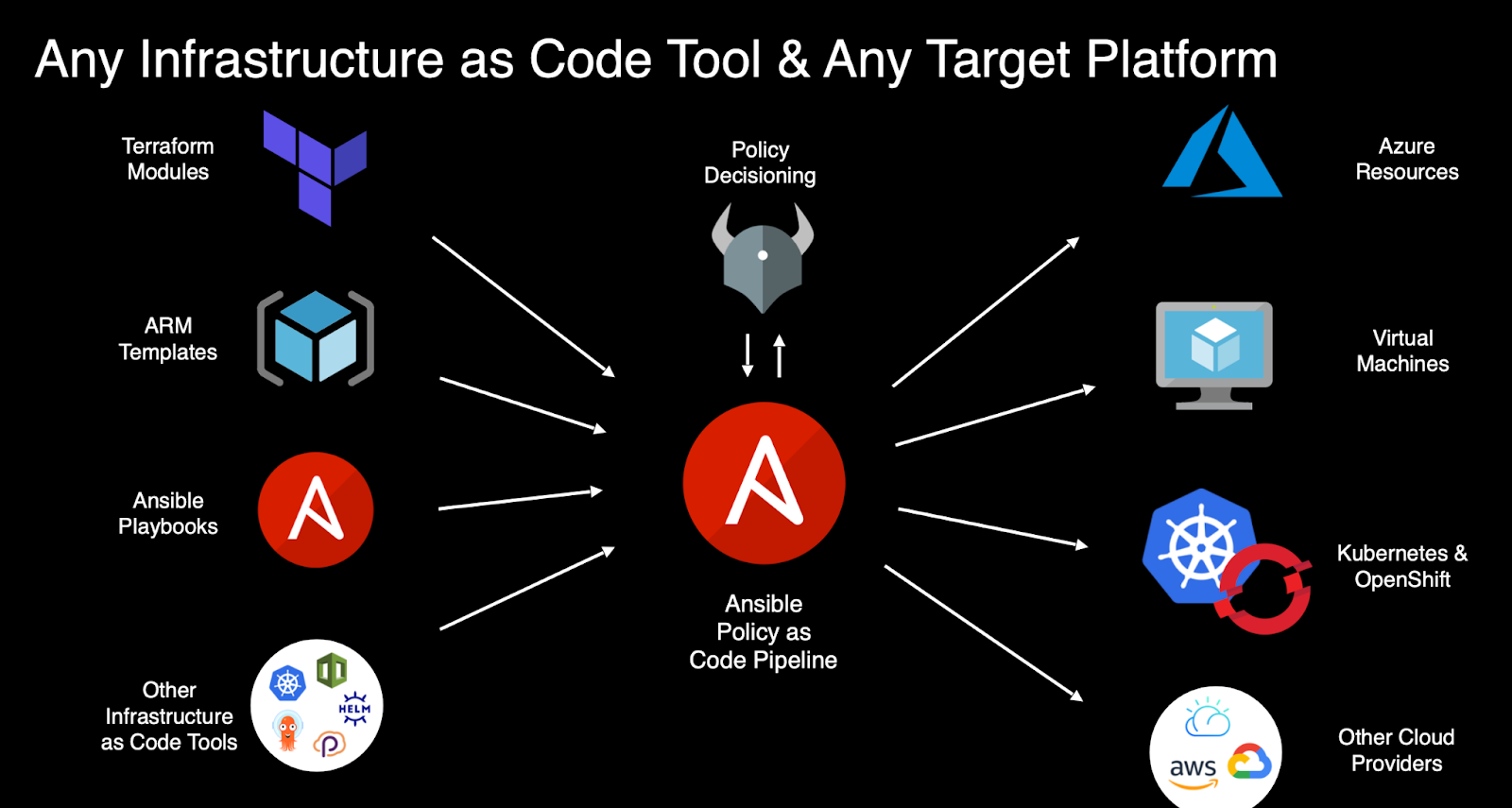 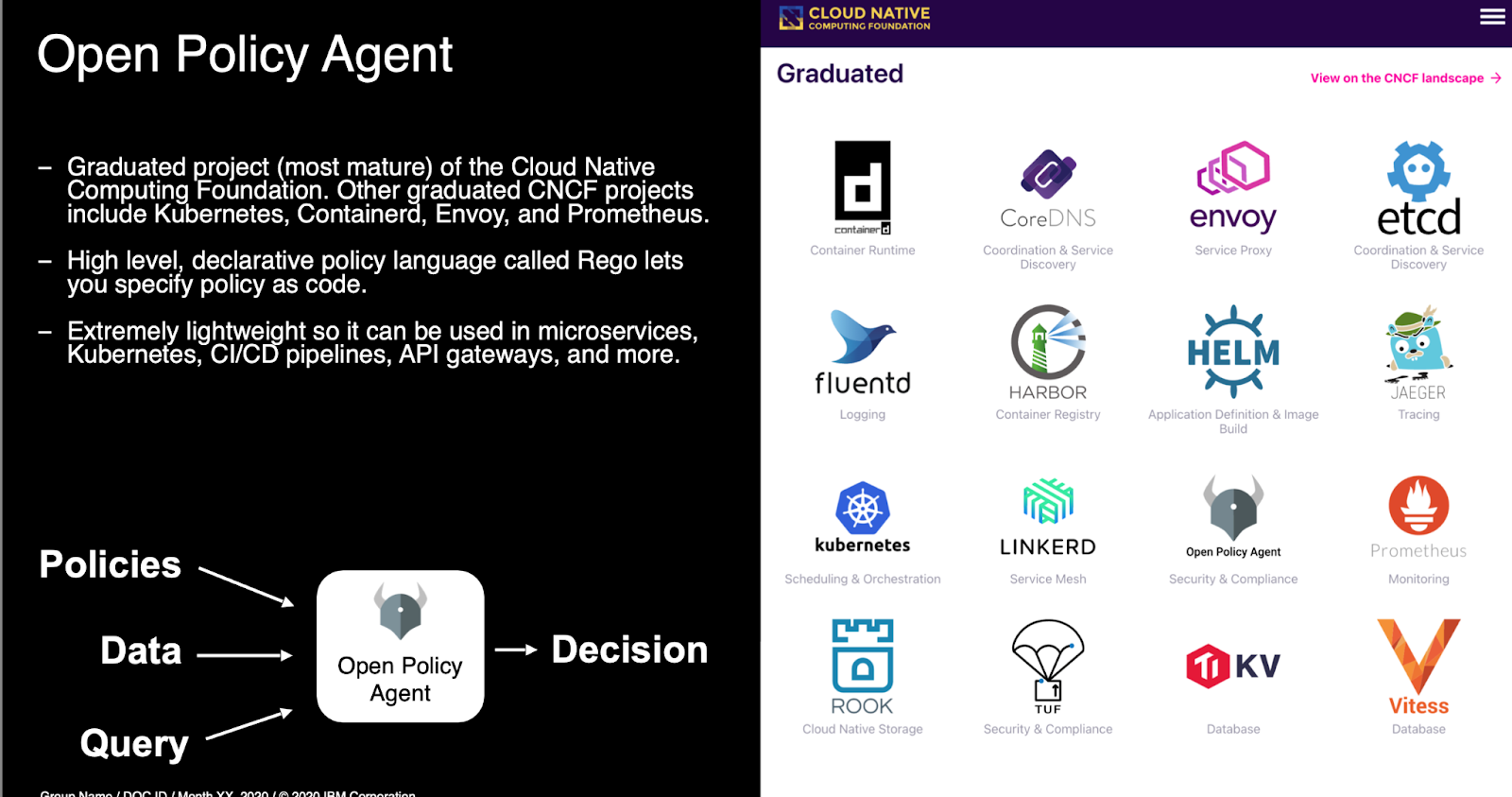 First, let’s address the proof points that were required for the full application stack.  This diagram shows that Terraform is being used for building out the environment. The beauty of Ansible Automation Platform is that it would work with any IaC stack, no refactoring the code into another IAC solution is necessary.  Ansible Automation Platform and OPA were used to validate that the code can conform to the established policies and standards.  It validated both the negative, which shows that it fails if the policy isn’t met, and the positive, meaning it succeeds if the policy is met.  Ansible Automation Platform can chain together actions, so it also provides a way to notify on failure, mitigate failures, etc.  In this scenario, the proof point was successful. 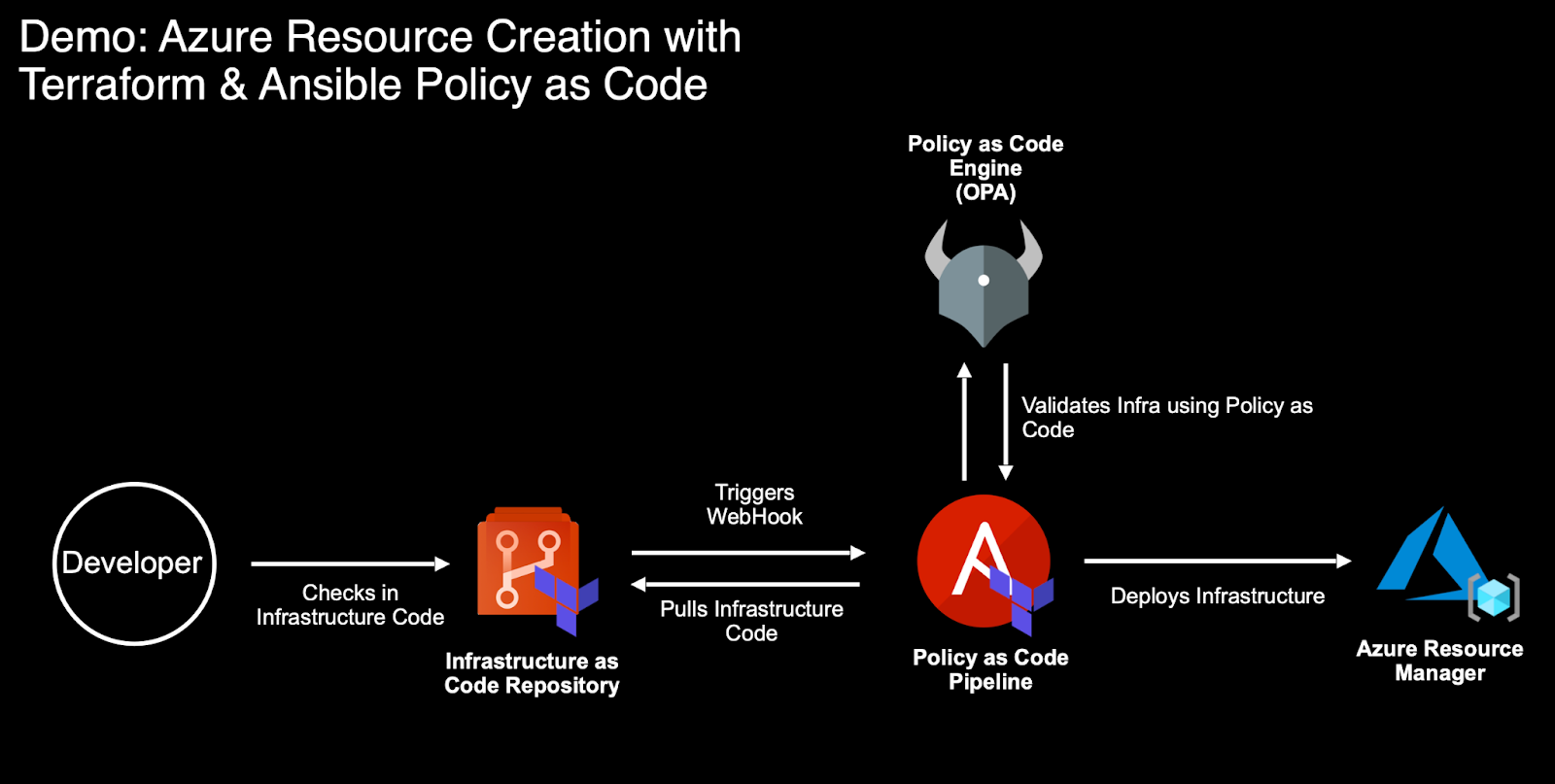 The next demonstration shows how to test and validate new policies.  Again, the Policy as Code solution can also verify that the policies being built work, and perform as expected.  New policies can also be vetted and validated using the solution.

Also, all of the policies and code are maintained in Azure Repos. But again, any other common repository can be used.  Finally OPA is lightweight enough that a developer can easily use it to validate a new policy on their laptop before checking it in as code. 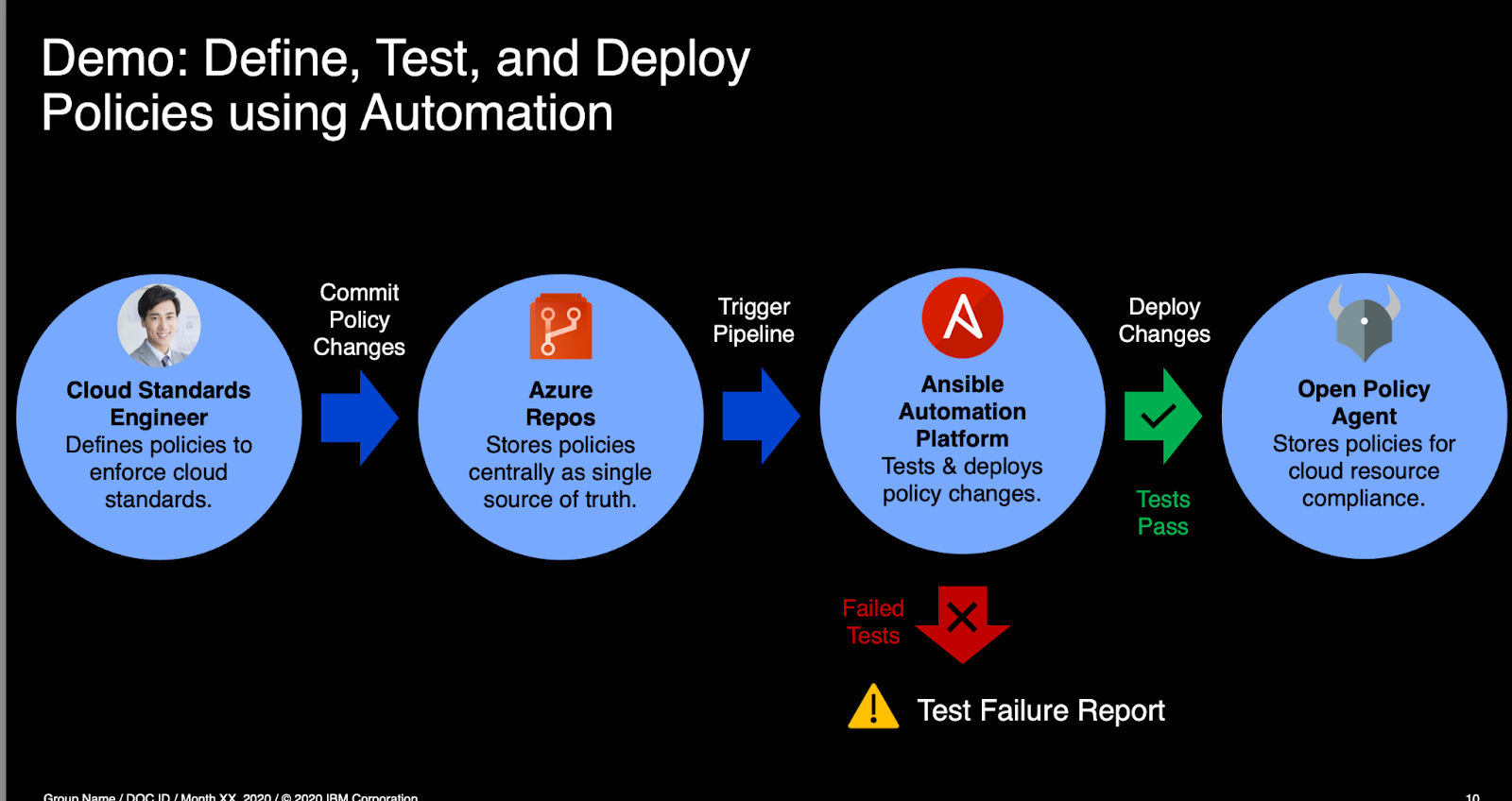 The final illustration shows that Ansible Automation Platform can audit an existing environment, either based on a schedule or based on introducing a new policy and retrofitting an existing environment.  It is possible to also automatically generate and even run playbooks to remediate the areas that don’t comply with the policies.  For the sake of the POC, this was well beyond the expectations of the customer.  Ansible Automation Platform and the team hit it out of the park with the solution.  In addition to all of the proof points being met, this makes a great solution for the automation of checking the policies, the automation of building the playbooks and the support for checking all of the IaC solutions. 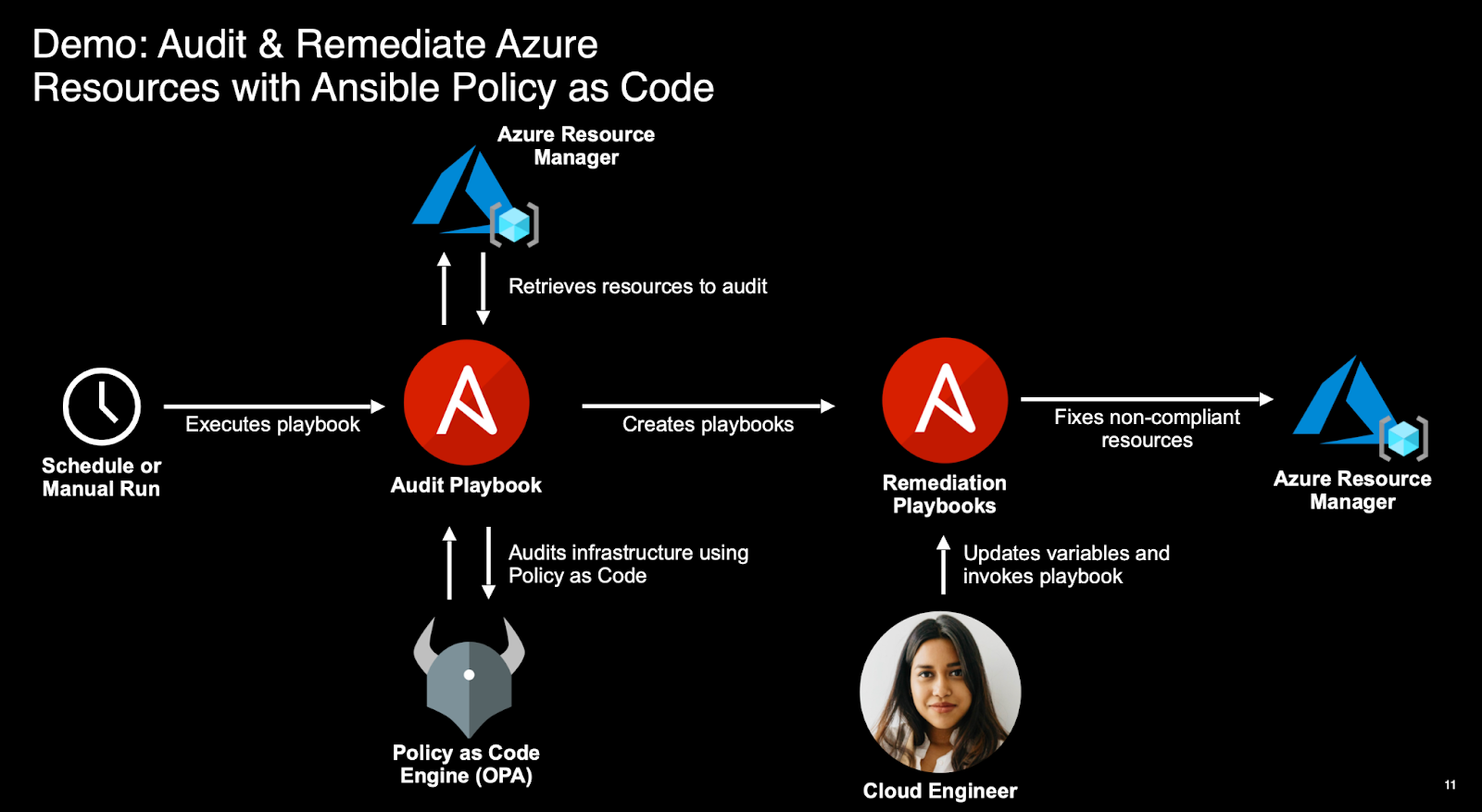 In conclusion, we recommend Ansible Automation Platform with OPA as the top choice for a Policy as Code solution because of the following:

I would like to acknowledge the individuals that led the technical effort: 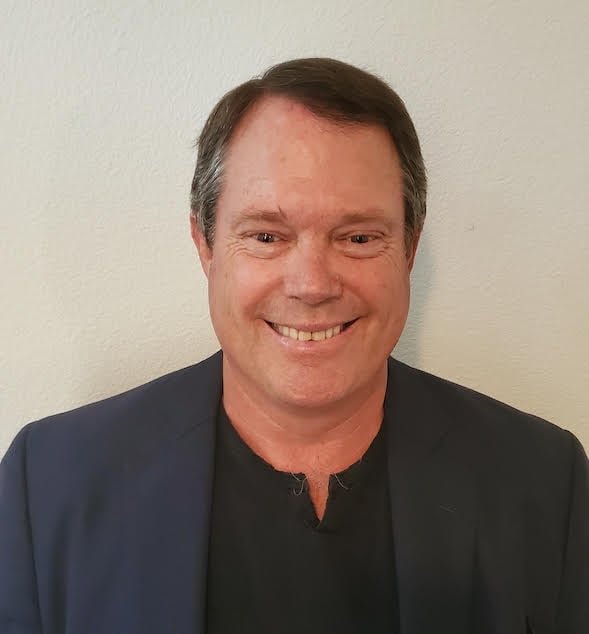 Building Cloud Solutions and Cloud Architectures since 2001. Focused on Ansible amplification with the IBM relationship. Global Solution Architect with the Global IBM Alliance Team. Based out of Las Vegas NV.