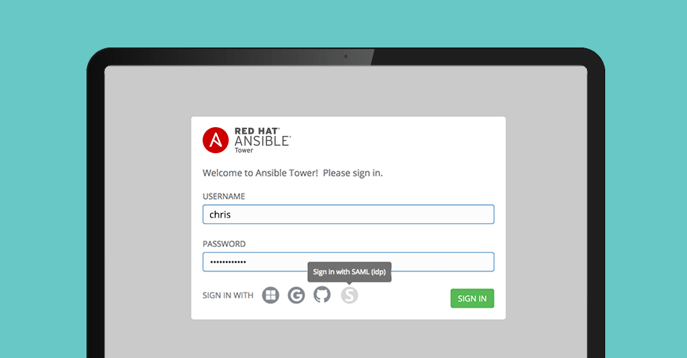 In order to allow the IDP to choose two-factor, we need to not ask it to authenticate using password. More specifically, we need to not include the samlp:RequestedAuthnContext directive at all. Ansible Tower shouldn’t be making the presumption about the IDP’s authentication methods on the other side. Maybe the IDP supports calling the employee on the phone to authenticate. This is a decision that should be made by the IDP.

Let’s see how we make this happen. Create the file /etc/tower/conf.d/saml.py with the following content:

Then issue ansible-tower-service restart. That’s it. But how can you verify things are working as expected? I’ll tell you...

You will then be redirected to your configured SAML idp. I have OneLogin configured for this blog post. Your SAML DevTools tab should now show the request that your browser sent to the idp. Note the samlp:RequestedAuthnContext directive. The existence of this directive indicates that requestedAuthnContext is set to the default, True.

With requestedAuthnContext set to false, Ansible Tower will not request that the user be authenticated using a password and the idp is free to choose whatever authentication method (i.e. two-factor) it wants to.

Note: In a future release of Ansible Tower (>= 3.3.0) requestedAuthnContext will default to False, effectively allowing two-factor to work out of the box.