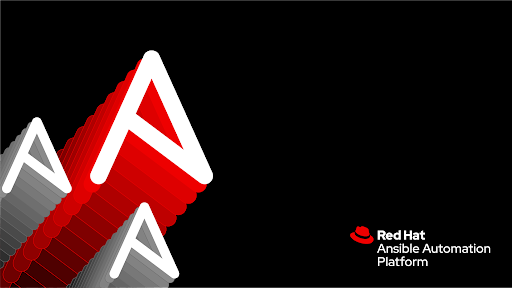 As part of the most recent Ansible Automation Platform 2.1 release announced December 2, 2021, we are excited to debut one of the most long-awaited features of the release: automation mesh.

Automation mesh enables you to reliably and consistently automate at scale, across on-premises environments, the hybrid cloud, and to the edge. It delivers flexible design options, from single-site deployments to platform installations spanning the globe, wherever you are in your automation journey.

This blog details the benefits of automation mesh, a high-level overview of how it works, and how it helps you simplify scaling your automation across your enterprise environments. We are planning more detailed technical deep dive blogs with automation mesh use cases in the future, so stay tuned!

Scaling automation across different platforms and locations is challenging. How do you ensure your automation executes consistently while still managing your platform centrally? How do you automate endpoints in remote areas with limited connectivity?

The best practice to overcome these challenges is delivering and running automation closer to the devices that need it. This design limits execution interruptions, which lead to inconsistent states, and possible downtime to IT services. 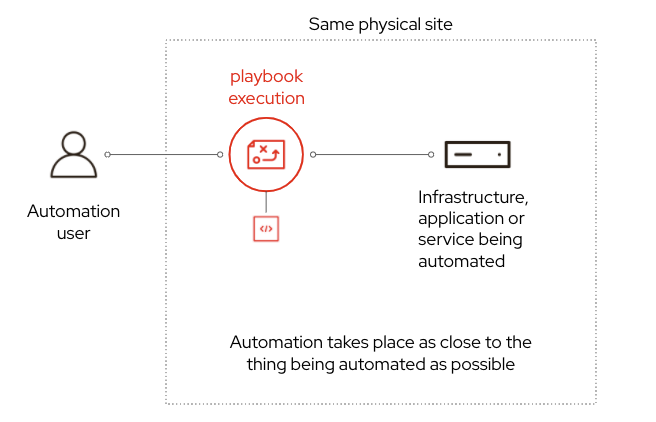 Enterprises, however, have multiple environments that span different locations, each with niche automation requirements. Delivering and managing consistent, reliable automation across these environments is arduous and time consuming. 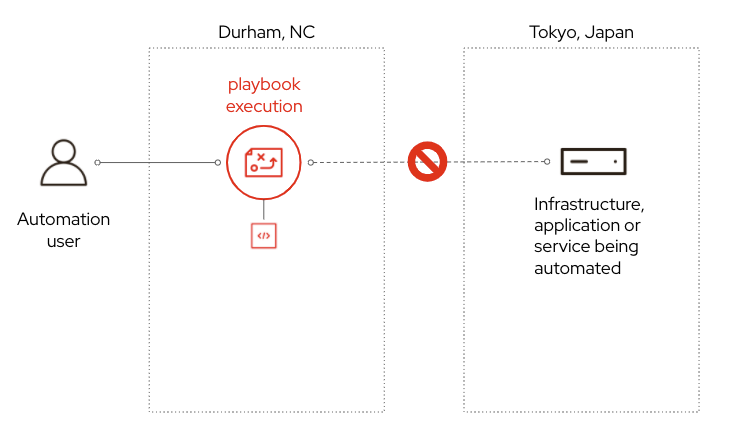 Automation mesh aims to simplify this undertaking and, in conjunction with automation controller, provides a scalable, reliable solution that reduces the operational overhead associated with multi-site deployments.

To provide context on how automation mesh helps overcome the challenges associated with distributing your automation, let’s briefly revisit what was previously known as Red Hat Ansible Tower and isolated node architecture.

Before: Ansible Tower and isolated nodes

Ansible Tower and isolated nodes made scaling across multiple regions and complex networks challenging to manage. 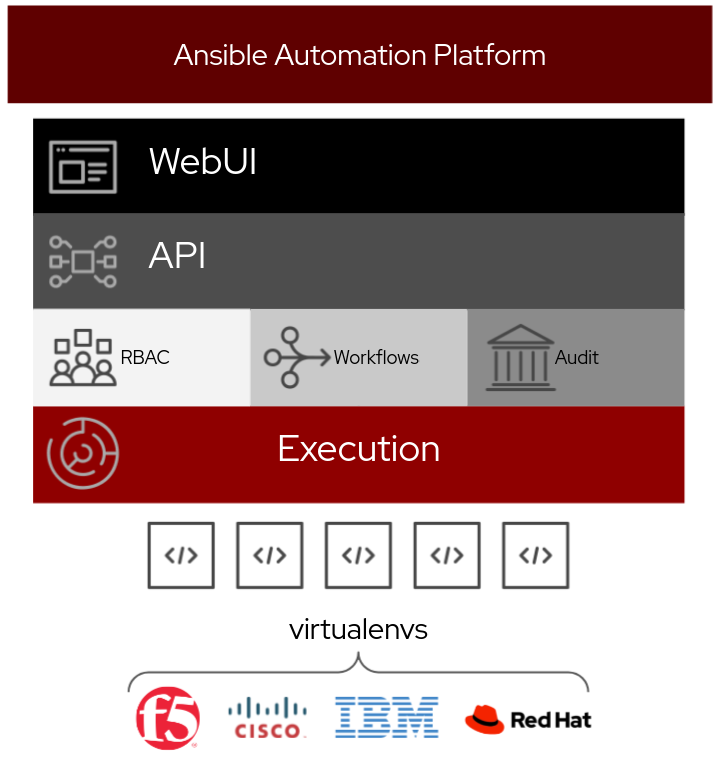 Ansible Tower’s tightly coupled shared execution and control capacity made scaling automation challenging to implement and manage. Increasing your execution capacity meant the entire cluster had to be proportionately expanded. This process was cumbersome and needed downtime if not in a Red Hat OpenShift environment.

This monolithic design also limited execution capacity to a single cluster, making it sensitive to network latency and connection disruptions. Architects were limited in their design options and often needed multiple Ansible Tower clusters or isolated nodes to expand automation capacity across regions or constrained networks.

While pushing changes to one site was straightforward using the previous architecture, how do you reliably and consistently deploy changes to dozens of locations across the globe? The answer to this is automation mesh. 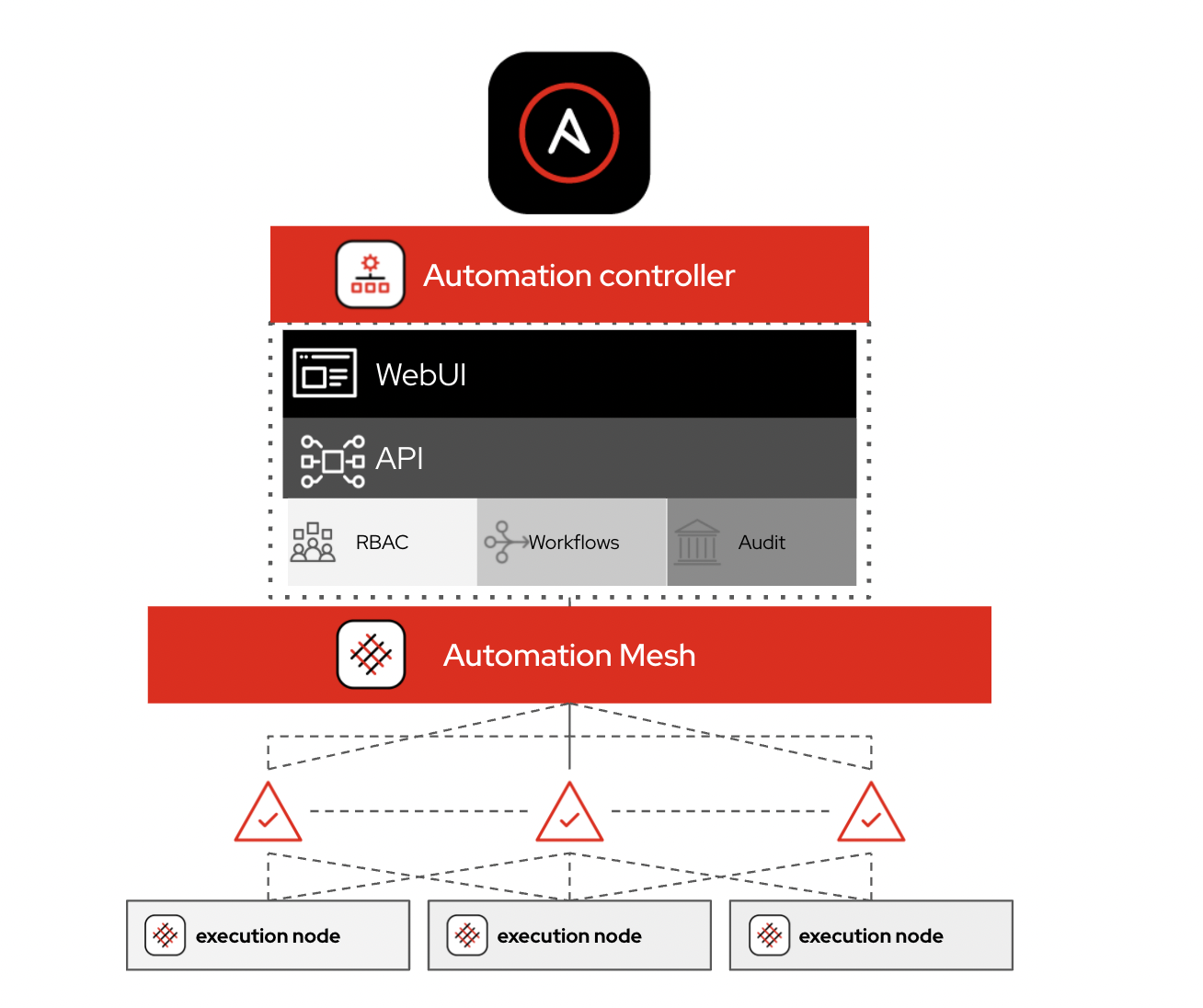 Design for your enterprise

Automation mesh offers design flexibility, from single-site deployments to platform installations spanning the globe. Automation mesh is a multi-directional, multi-hopped overlay network delivering automation across constrained networks, such as DMZs and VPCs, to remote endpoints not directly connected to the automation controller.

Automation mesh offers a simple, flexible and reliable way to scale your control and execution capacity independently, delivering automation closer to the endpoints that need it with little or no downtime.

Automation mesh introduces fault tolerance and redundancy via native peering capabilities and new features, such as hop nodes. Distributing automation execution to the locations where it's needed makes the platform resilient to network disruptions and latency.

The table below summarizes the benefits and changes introduced with automation mesh: 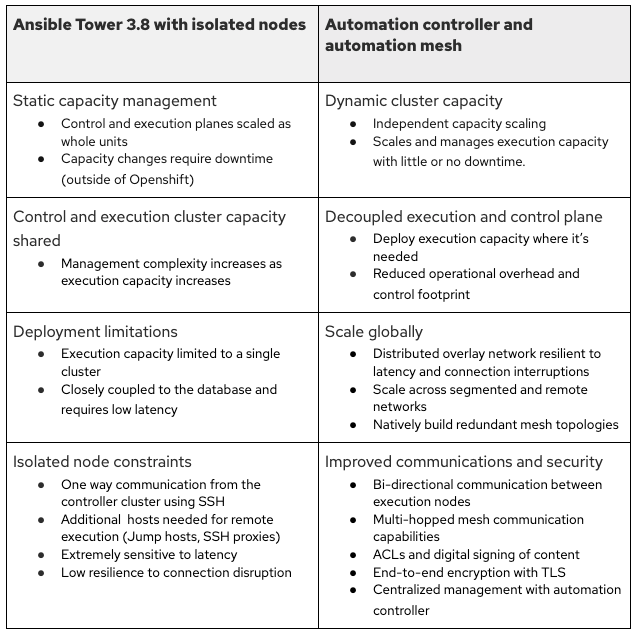 Is automation mesh the same as isolated nodes?

How do I deploy and remove automation mesh nodes?

How can I verify and check my automation mesh configuration before installing it?

The installer performs sanity checks on the automation mesh configuration and, if there are errors, will warn you before you deploy. Also, the installer can generate a GraphViz file providing a visual representation of your automation mesh topology. You can then review your mesh layout before continuing your installation.

Please stay tuned for technical Ansible automation blogs that will cover these topics in more depth. We have created a blog section just for automation mesh.

The automation mesh component of Ansible Automation Platform provides a simple and robust framework to scale automation from single-site deployments to installations spanning the globe.

With its flexible, multi-directional communication layer and native peering capabilities, you can reach further with improved reliability and less sensitivity to latency and connection disruptions.

Native security features such as TLS authentication and encryption and additional access controls means you can rely on Ansible Automation Platform to help securely expand the boundaries of what is possible for your entire enterprise IT estate.

In the end, automation mesh is a must-have component of Ansible Automation Platform that acts as a force multiplier for global, enterprise-wide automation.

There are several resources available to learn more about automation mesh:

A special thanks to Anshul Behl for his contributions to this blog.

Craig Brandt is a Principal Technical Marketing Manager for Ansible Automation Platform. Prior to this position, Craig served as a Solution Architect representing Red Hat at the IBM Services Integration Hub. He focused on large, complex deals that covered EMEA, LATAM and Canada regions. He brings over 16 years of experience in the IT field that covers automation, containerisation, management, operations, development and solution design