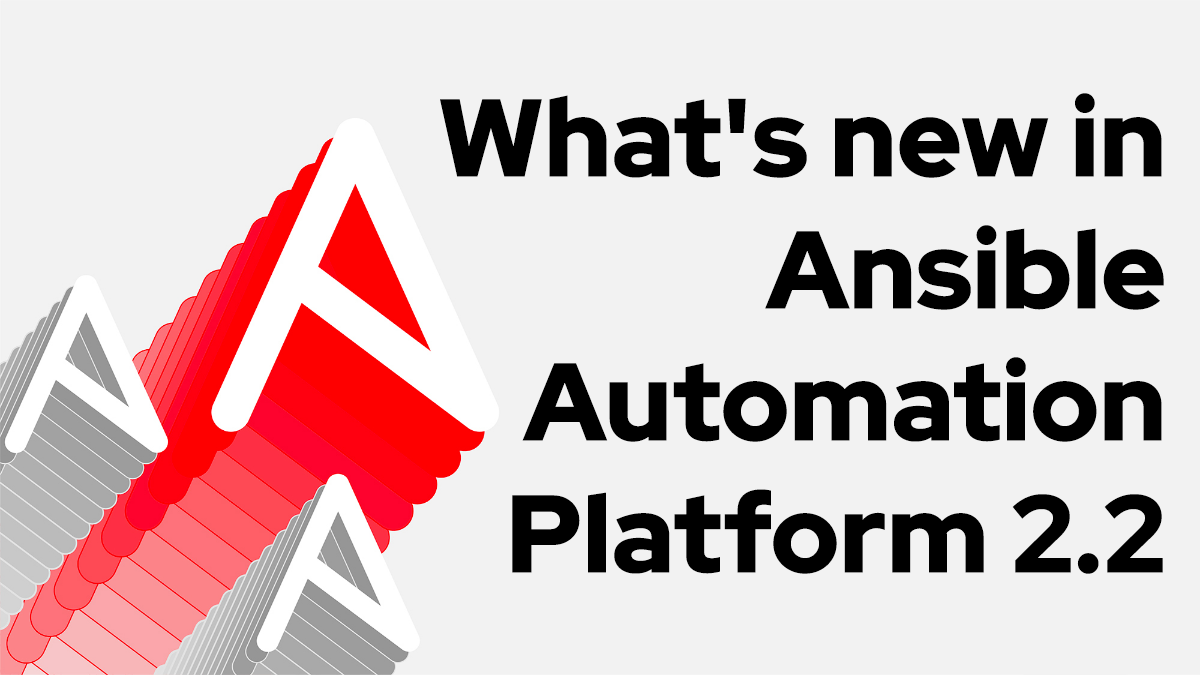 The Ansible product team at Red Hat is thrilled to announce the general availability of Red Hat Ansible Automation Platform 2.2, which includes numerous features and bug fixes that further solidify Ansible Automation Platform as the de facto enterprise IT automation solution for developers to operations teams in data centers, clouds, and at the edge. A few of the most noteworthy features in this release include:

Don’t forget to check out the product documentation including the release notes!

Let’s face it, automating at enterprise scale is really hard. Although many features were added for the content creator and developer in Ansible Automation Platform 2, the automation operations teams are typically responsible for making sure automation is up and running as it should across all inventories, worldwide, with 24/7 availability and uptime. As enterprise automation operations teams continue to implement strategies from IT leaders and architects, their need to troubleshoot complex automation topologies continues to grow as well. With the introduction of automation mesh in Ansible Automation Platform 2, automation execution can now be decentralized, running closer to where the automation needs to run (in the cloud, at the edge, etc.) while still managed by a single operations team. This operations team now must support multiple environments that span different locations, each with niche automation requirements that they may not have intimate knowledge of at any given moment. 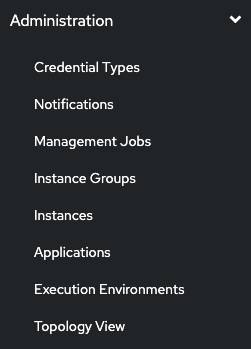 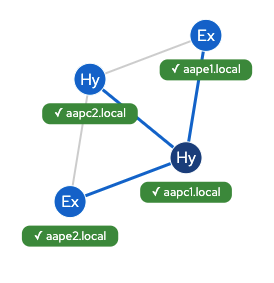 You’ll notice two of the four types of automation mesh worker nodes illustrated, along with their accompanying connection status. This simple automation topology contains hybrid nodes (Hy) and execution nodes (Ex). Additional information can be found by hovering over a node, which will highlight its connections to the other automation mesh nodes, giving you instant visibility into how they are connected together. The hybrid nodes could have just as easily been controller-only nodes (C) (without any automation execution) and interconnecting hop nodes (h) (jump or relay nodes) would be included in more complex automation topologies (see next example below).

As automation continues to scale, the topology viewer becomes more useful, as shown in the following example, which contains three of the four node types (controller, execution, hop): 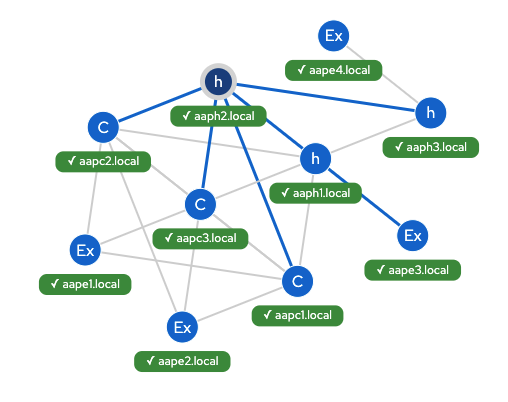 The increased focus on information security and how software is run in enterprise production environments has never been greater. Providing security-focused features in Ansible Automation Platform 2 continues to be a priority, with the ability to execute certified and compliant automation anywhere in your enterprise. New in this release is collection signing, which is the genesis of a more holistic chain-of-custody security feature going forward. The following two use cases are of note:

Digital signing for Ansible Content Collections is only the beginning. Since the running of automation occurs in automation execution environments, it’s only natural that the next area of content signing would be at this level, the container level. Stay tuned for more on this in coming releases!

For more information, check out the project upstream documentation.

NOTE: This feature is included as a technology preview supported feature, and may be made fully supported in a future release.

As Ansible Playbooks and roles are written by more people across teams that want to automate in their organization, there becomes a need to provide standardized tools to help developers along the way.

NOTE: This feature (ansible-lint)  is included as a technology preview supported feature, and may be made fully supported in a future release.

For more information, check out the upstream project documentation.

For more information, check out the VS Code extension download, as well as a recent blog post that covers a deep dive.

With Ansible Automation Platform 2.2, the automation services catalog evolves from a hosted service on console.redhat.com to a self-hosted, on-premises version that gives automation creators and business users self-service access to their Ansible automation across physical, virtual, cloud, container, and edge environments.

This new iteration of the automation services catalog helps organizations extend the value of their automation to the business user by presenting access to Ansible Automation Platform in a catalog-style format. With multilevel approval and role-based access control (RBAC), administrators can deploy projects more quickly, with the governance they need to meet compliance and procurement requirements.

NOTE: This feature is included as a technology preview supported feature, and may be made fully supported in a future release. 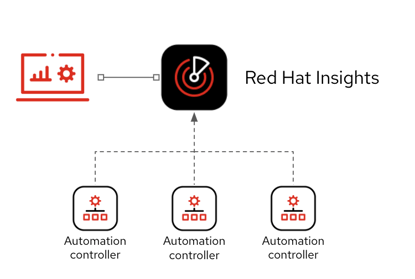 With Red Hat Insights, you get actionable metrics and dashboards to help identify, troubleshoot, and resolve operational, business, and security issues across your entire ecosystem. You gain full visibility into the performance and return on investment (ROI) of your efforts, enabling more informed decisions to optimize and expand your automation.

This eight-minute overview video highlights the components and features in the latest version of Ansible Automation Platform—and how they come together to deliver a comprehensive enterprise automation experience.

Sign up for an Ansible Automation Platform 60-day trial to try it in your environment.