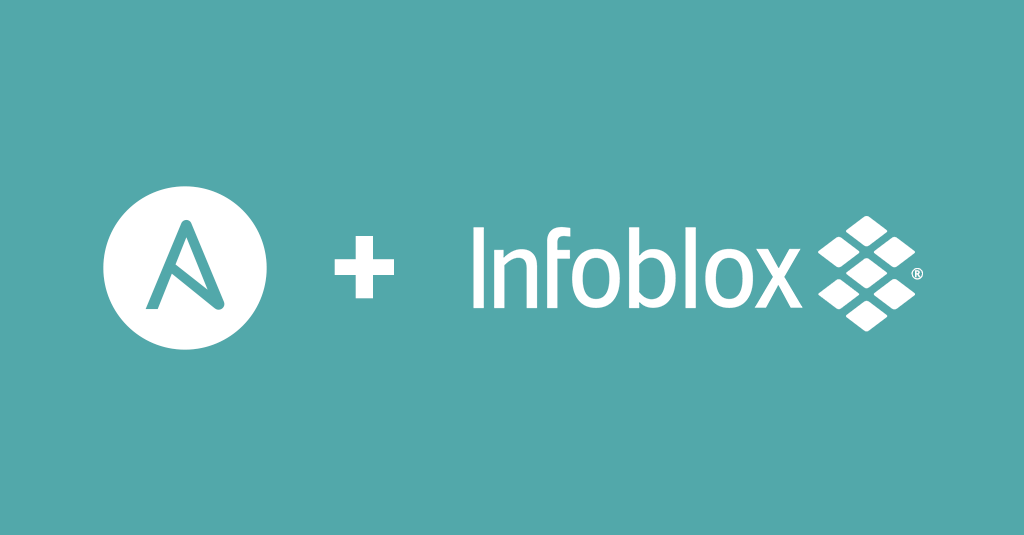 As Sean Cavanaugh mentioned in his earlier Infoblox blog post, the release of Ansible 2.5 introduced a lookup plugin, a dynamic inventory script, and five modules that allow for Infoblox automation. A combination of these modules and lookups in a role provides a powerful DNS automation framework.

Today we are going to demonstrate how automating Infoblox Core Network Services using Ansible can help make managing IP addresses and routing traffic across your network easy, quick, and reliable. Your network systems for virtualization and cloud require rapid provisioning life cycles; Infoblox helps you manage those lifecycles. When paired with Infoblox, Ansible lets you automate that work. Ansible’s integration with Infoblox is flexible and powerful: you can automate Infoblox tasks with modules or with direct calls to the Infoblox WAPI REST API.

This post will walk you through six real-world scenarios where Ansible and Infoblox can streamline your network tasks:

To follow along with these examples on your own Infoblox devices, you’ll need to install the dynamic-infoblox Roles and set up your Infoblox credentials as a provider.

Infoblox credentials and the nios_provider

Any time you use Ansible with Infoblox, invoking an Infoblox lookup or module, you must specify the Infoblox IP, username, and the user’s password. Our Roles call these credentials, taken together, the nios_provider. By creating a nios_provider dictionary as a group variable, you can apply these values consistently in all your playbooks and roles, referring to them in a single line whenever you need them.

Using modules to set up a subnet and forward DNS zone

Once you’ve got your credentials ready, you can run a playbook that leverages the dynamic Infoblox Role to create a subnet and a forward DNS zone; Ansible modules take care of this with ease. Creating a subnet is a common network project: subnets allow an administrator to expand the network, responding to a new company branch, office, or line of business. Forward DNS zones establish the single direction mapping of address names to IP addresses. A new DNS zone may be required for a business to expand its global reach into an additional country (e.g. .uk) or respond to a merger. The tasks shown here define ansible_subnet and ansible_zone as variables, so you can override them each time you create a new subnet.

In this example, we’ve used the default Infoblox View. Infoblox allows multiple Views within a single DNS zone. If you want to route internal traffic to on-premise servers and route external traffic to public cloud servers, you can do that by designing a DNS zone with two DNS Views. This type of setup ensures that traffic to your employee intranet does not burden the servers your customers use, providing better geographic coverage and higher levels of around-the-clock coverage for customers. However, for the simple example above (and subsequent examples), we’ve stuck to using the default View.

Using the Infoblox API to set up a reverse DNS zone

So far you've seen how to use Ansible modules to automate Infoblox changes. Our next example shows how to use the Infoblox WAPI REST API to automate a task that may not be available in your current version of Ansible. Reverse DNS zones allow a client to look up an address name if they know the equivalent IP address. The importance of reverse zones can be illustrated with a common example: email servers. Incoming traffic from an IP address that does not have an associated address name through reverse DNS can often be flagged as spam. Reverse zones can also help with other use cases, like gathering authentic data about other businesses that visit your websites.

The nios_zone module can already create a forward DNS zone, but it can only create reverse zones with the latest version of Ansible. However, you can still automate this task in older versions of Ansible - just use Ansible to make calls directly to the WAPI API. You can do this with either the uri module or a shell script. We recommend the uri module, since it helps capture the integration more descriptively and enables idempotent calls leveraging standard REST return codes. Here the uri module serves as a umbrella module to succinctly capture a single WAPI call within the Ansible module ecosystem. It is worth noting that the WAPI API operates much like Ansible modules: JSON in and JSON out. If you express the body of the API call in yaml, it is easy to use a Jinja2 filter (a topic we will revisit in depth) to convert it to JSON at runtime.

Using a Jinja2 template to reserve the gateway address

This task builds your gateway host name step by step with this complex Jinja2 expression. The Ansible-packaged ipaddr jinja filter is versatile - it is capable of achieving a larger number of routine IP address manipulations. For example, if your IP range is 192.168.1.0/24 and your ansible_zone is ansible.local, the filter in the task above creates a name in a single line:

The gateway host name, passing the values listed above through the example template, would be:

Jinja2 filters are a complex Ansible topic; you should have a solid Ansible foundation before building your own Jinja2 filters. As you start creating filters, you can test expected values locally, or leverage Sivel’s Ansible Template Tester to see the results of your filters before you use them in a playbook or role. 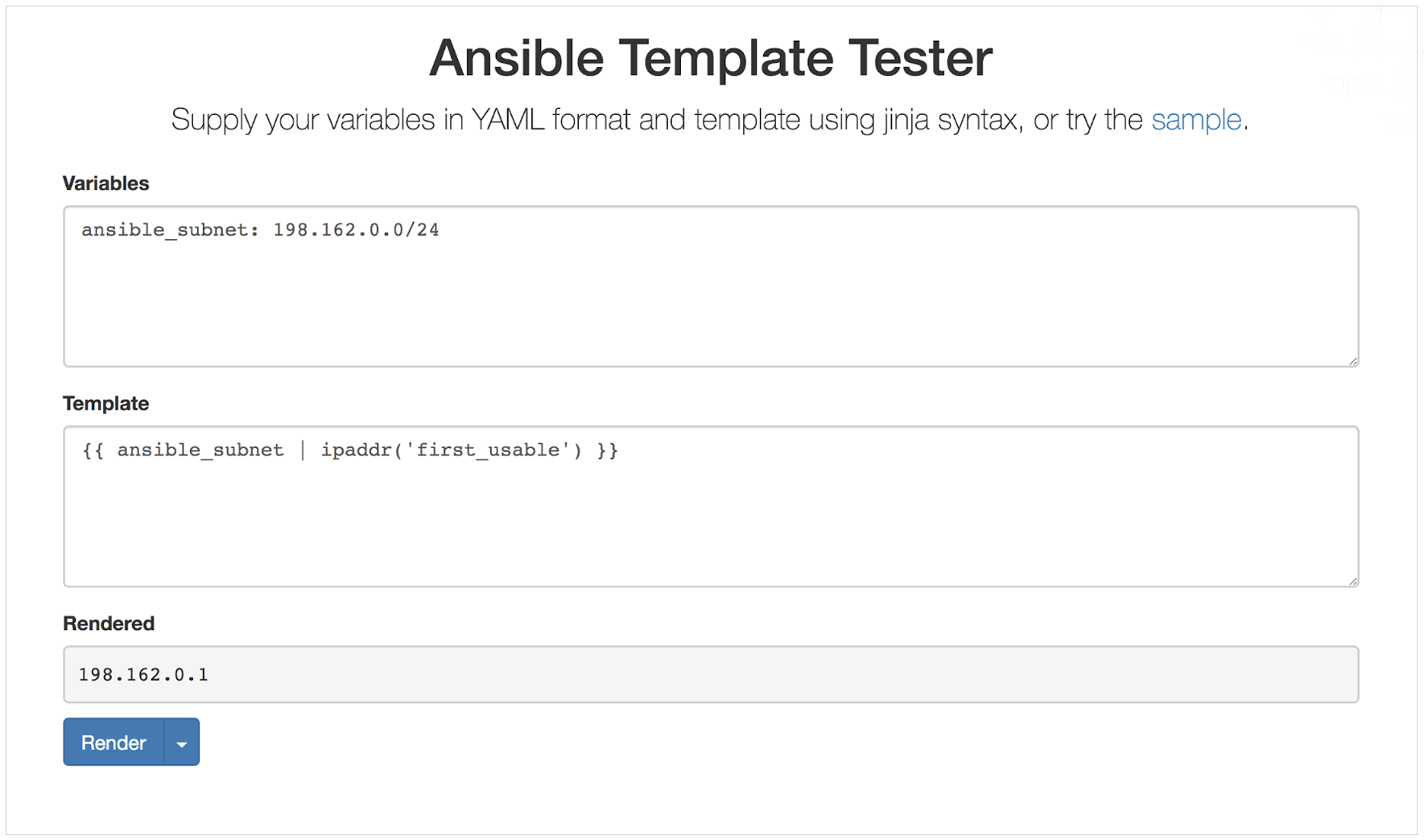 Once your gateway address is reserved, you can use a loop to generate a known number of additional host records. In a real-world scenario, you would probably generate groups of servers within the subnet (for example, database servers, application servers, etc.). For this simple demo, you can define a loop that will dynamically generate generic host records based on a user-supplied host_count value. This demo shows the power of nios_next_ip lookup plugin, which can obtain a single next available IP or a range of next available IPs to assign. In a Playbook with both tasks (the one above that creates a host record for the gateway address and the one below that generates host records), if you don’t define a host_count, the playbook won’t create any additional host records; just the gateway address will be created.

If you generate host records with Ansible based on a user-supplied host count, wouldn’t looping through a host count potentially cause indexing issues on a second run? Unfortunately it does, but keeping a total count of generated hosts solves this problem. One approach is to maintain a static total host count file on the control node viewed as a source of truth. By leveraging Ansible’s lookup plugin feature to retrieve its contents, each time a host is generated the count in this file is incremented so consequent role executions (especially those automated in different subnets) do not overwrite each other’s records!

Generating host records this way is different than generating them with naming conventions like most enterprises do, but it is an easy out-of-the-box method using the nios_next_ip lookup to create some records across different zones and/or subnets. Infoblox also supports a csv record import feature for static records. 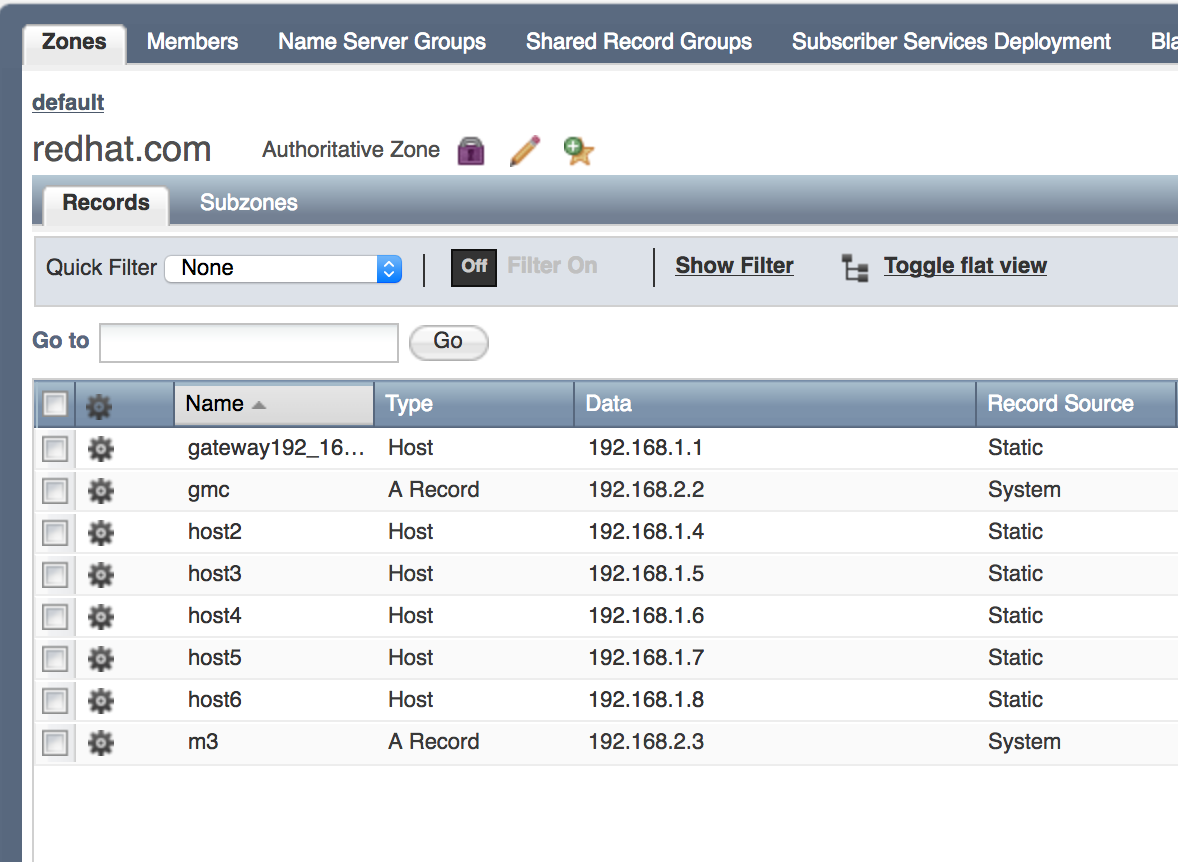 In the first four scenarios, you’ve seen how Ansible works with Infoblox at the level of hosts and subnets. What can Ansible do with Infoblox at scale? Automating a single Infoblox instance provides value, but production Infoblox systems are often designed in a Grid. The Infoblox website explains the full power of Infoblox Grid technology. The Infoblox Grid establishes a distributed relationship between individual or paired appliances to remove single points of failure and other operational risks inherent in legacy DNS, DHCP, and IP Address Management infrastructure. Each Grid contains one Grid Master and a varying number of additional Grid Members and/or Grid Master candidates. Grid Members only contain a portion of the Infoblox database needed to do their job. Grid Master Candidates, on the other hand, have a real-time full copy of the Grid Master’s database to provide disaster recovery functionality. You can use our Ansible Roles to predefine new Grid Master Candidates and Grid Members like this:

As you can see from these five examples, Ansible and Infoblox work together to manage your network infrastructure and the traffic it carries quickly, easily, and reliably. Ansible builds on the robust capabilities of the Infoblox WAPI API. Using Ansible modules and direct calls to the WAPI API, you can write reusable Ansible Roles and Playbooks that can be quickly adapted to handle separate networks. If you’d like, you can start by customizing the roles in the ansible-networking repository, which connect all of the Ansible concepts discussed in today’s post.

For more information on Ansible networking check out the Why Ansible Networking page.

Join the Network Automation community on GitHub just email us your GitHub ID.

Explore Ansible for Network Automation on our docs page. 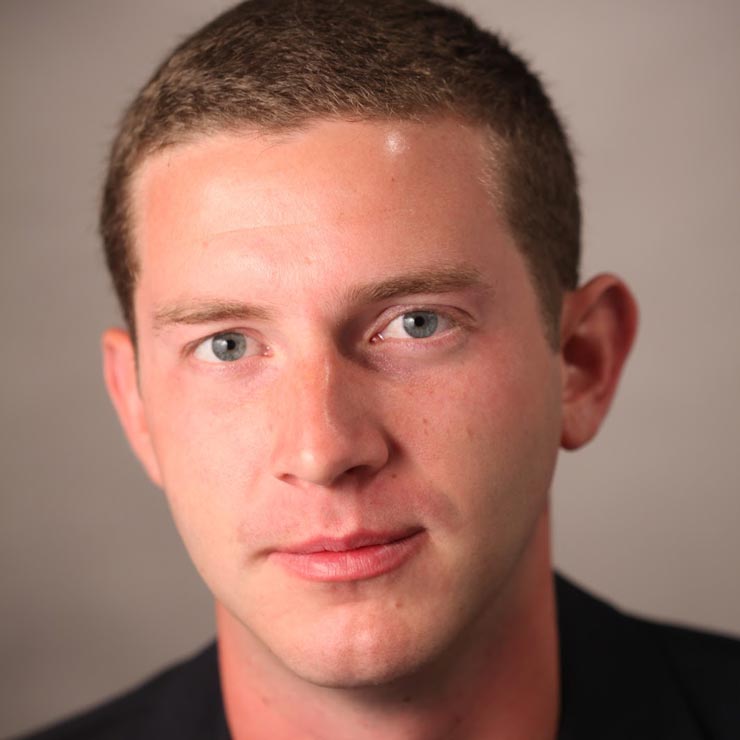 Branden Pleines is a Senior Consultant in the Automation Practice with experience in Ansible, Satellite, and the Red Hat Business Process Automation Manager. His recent client work includes automating Azure Cloud Services and development of MongoDB dynamic inventory. Branden's Ansible Google Compute demo aired at Google Next 2018. Over the past couple months, Branden has been writing Ansible Roles to automate Infoblox Core Network Services on the side with his father. In his free time Branden enjoys basketball, live music, and life in the Bay Area.