Ansible as part of the Red Hat Ansible Automation Platform continues to grow and mature. Recent enhancements include Ansible Content Collections, automation execution environments, and an increasing list of integrations using plugins and modules. It is more important than ever that both new and experienced content creators have access to tools that help them write better content faster. The newly created Ansible Devtools initiative focuses on developing and enhancing tools like ansible-navigator, Ansible VScode extension, ansible-lint and so on to help ease the Ansible automation content creator experience. In this blog, we will do a deep dive into the Ansible VSCode extension, giving an overview of how it works and the initial setup required to get it working after installation.

The Ansible Language Server is released as a node module on the npm repository, allowing it to be reused by other editors supporting language server protocol, while the VSCode extension client was released on the marketplace with many additional features.

Tomasz continues to be a core contributor to the Ansible extension and we would like to thank him and all the other community members for their contributions to help make the extension better for Ansible content creators with every new release.

The Ansible Language Server implements language server protocol (LSP), which is an open, JSON-RPC based protocol that is used between source code editors, integrated development environments (IDEs) and servers that provide programming language-specific features. The goal of the protocol is to allow programming language support to be implemented and distributed independently of any given editor or IDE. 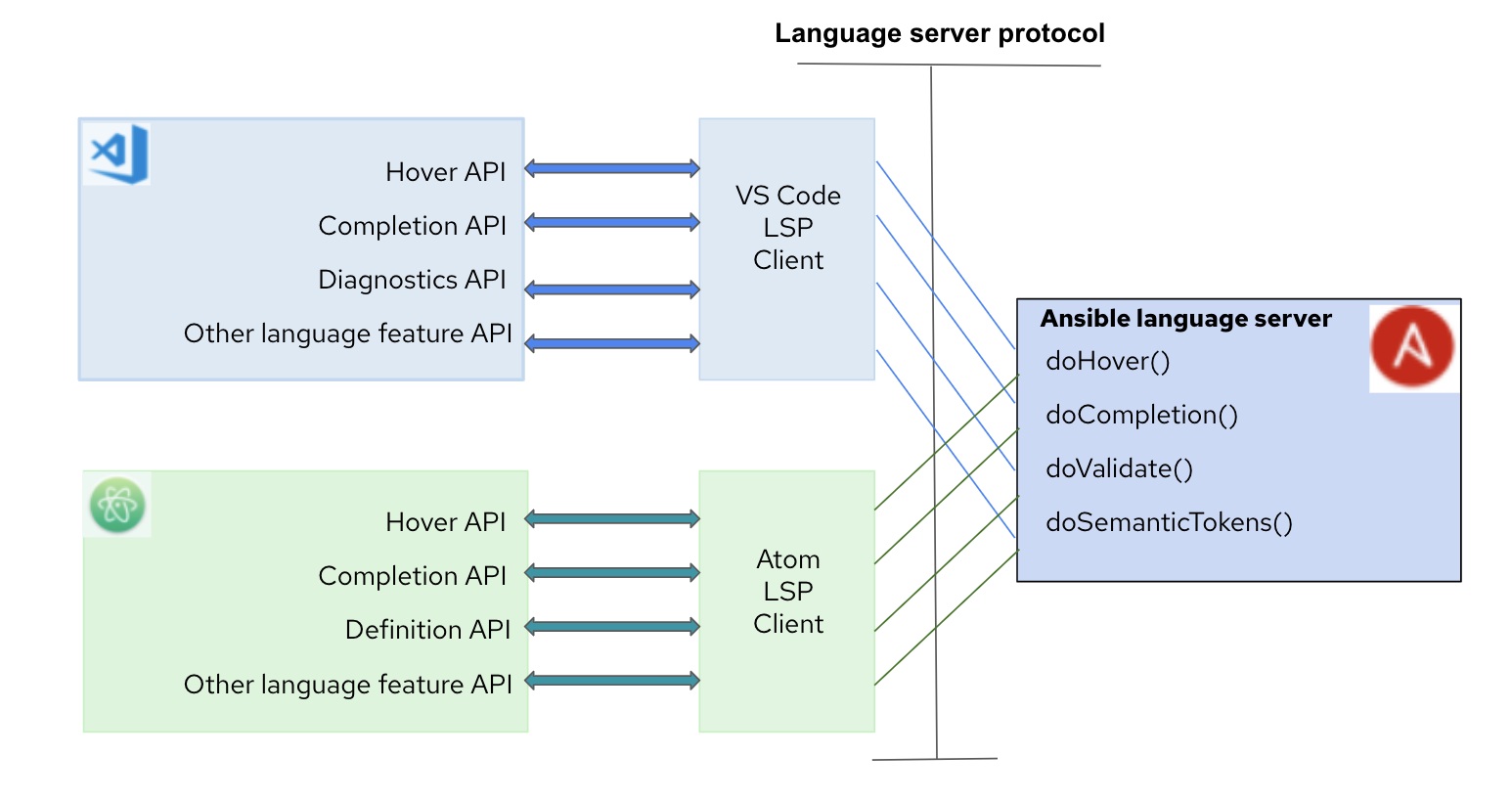 It serves the JSON-RPC request sent by the development tool (client). The language server runs Ansible commands like ansible-config, ansible-playbook and so on to support these features and thus requires an Ansible package or ansible-core installed locally or within an automation execution environment. In addition, the language server relies on ansible-lint for providing diagnostic information if installed and enabled (default). While running with an automation execution environment, ansible-core and optionally ansible-lint should be included. 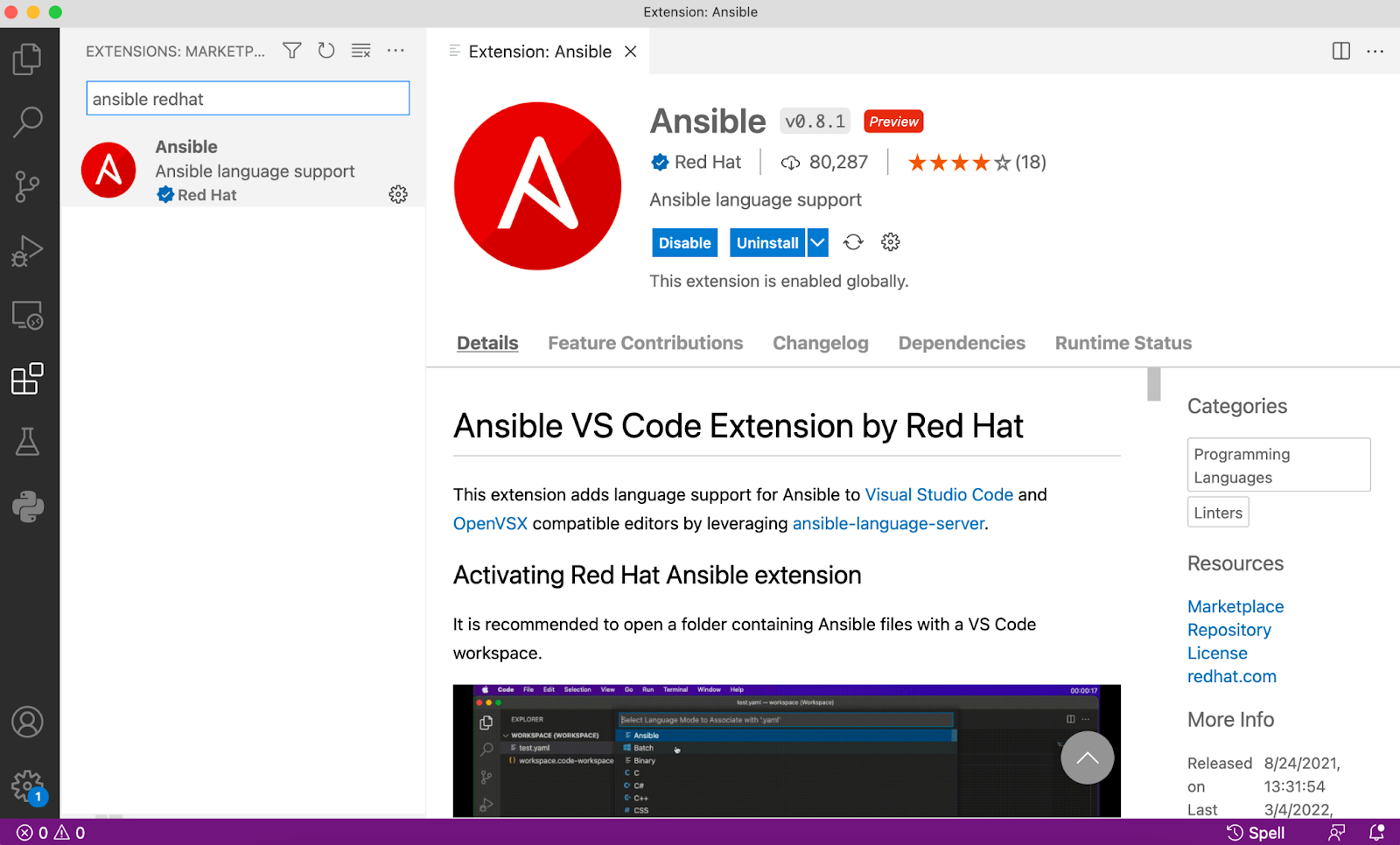 The Ansible extension supports multiple configuration options allowing, for instance, to change the executable path for Ansible, ansible-lint, python interpreter and so on. There is also an option to enable the automation execution environment and users can choose the container engine, image name, pull policy and more. To see and change the configuration options in the VSCode window, go to “Code->Preference->Settings” and in the Search settings box type “ansible” as shown in the below snapshot. 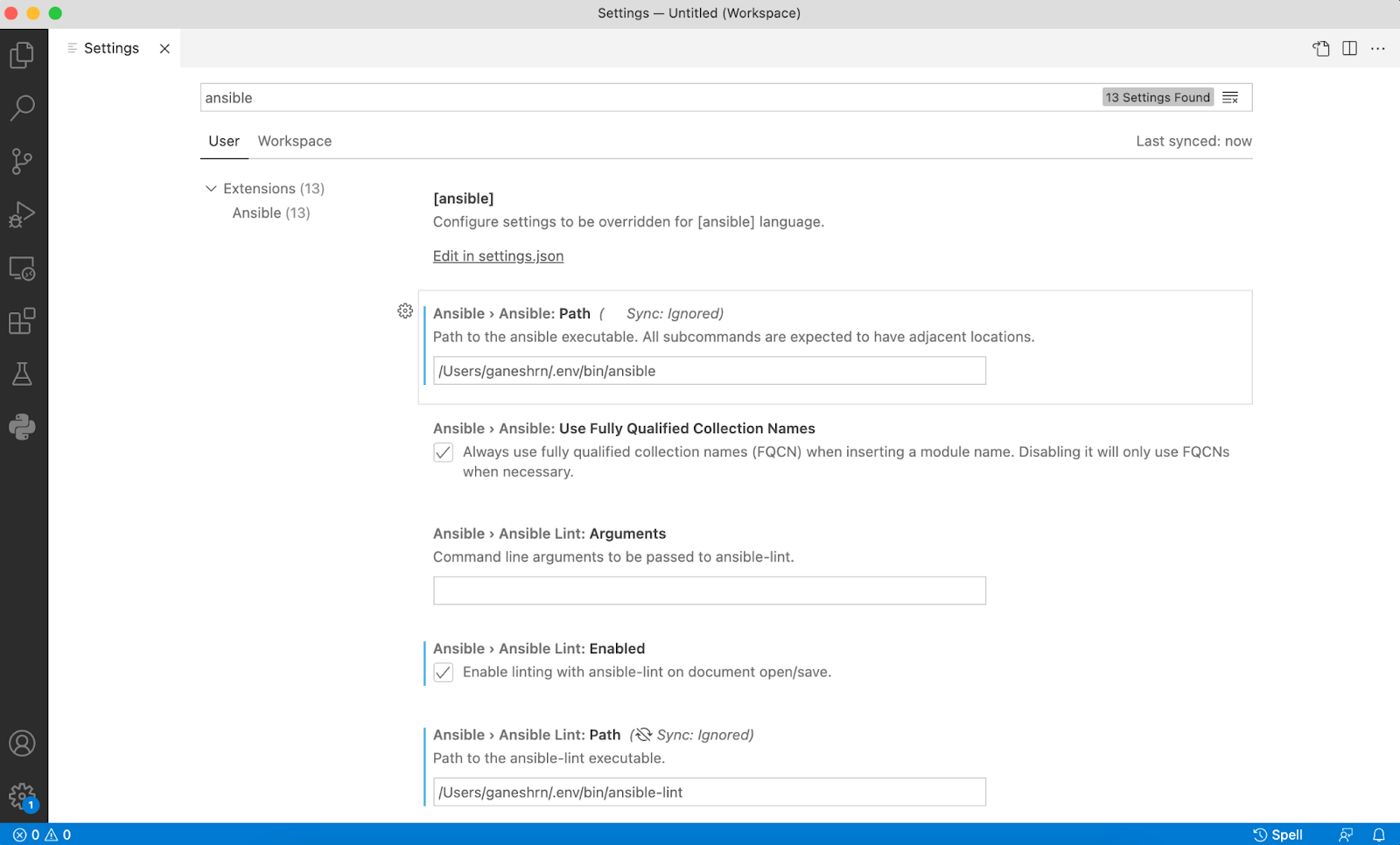 The preferences can be set for a given user or workspace, and depending on the environment, also for remote type and workspace folder. Settings in the user scope will be applied globally for any instance of VSCode that is opened. Workspace scoped settings will be stored inside your workspace and only apply when the current workspace is opened. For more information refer to the VSCode documentation here. Alternatively, for workspace settings, you can also provide the Ansible settings by editing the .vscode/settings.json file within the workspace root folder as shown below. 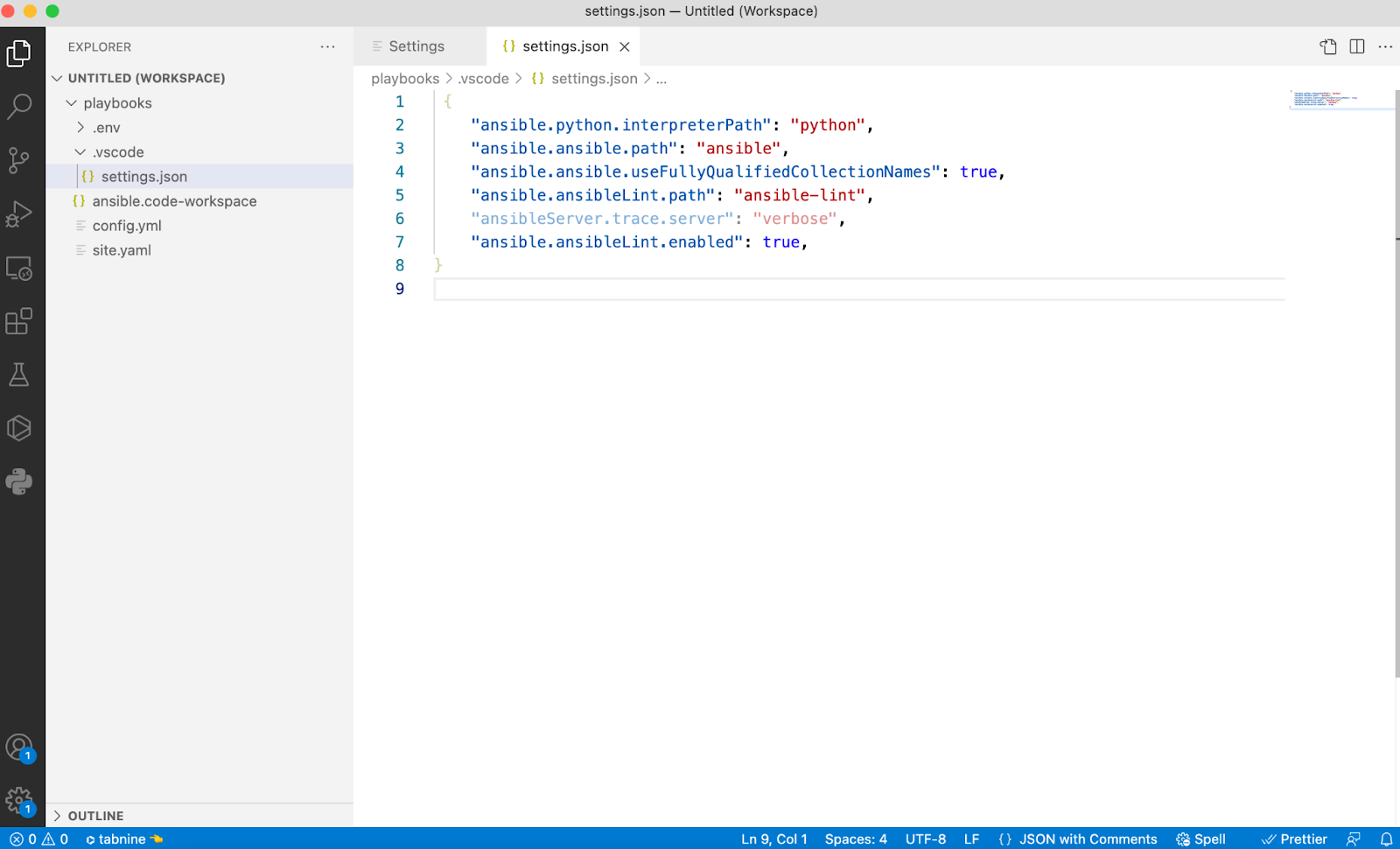 As stated above, the vscode-ansible extension depends on the ansible-language-server running as a background process to provide features for Ansible Playbooks and task files like auto-completion, hover, diagnostics, goto and more. The extension also depends on the Red Hat vscode-yaml extension to provide auto-completion and diagnostics information of other related files like Ansible vars file, ansible-navigator settings file,  ansible-galaxy requirements and metafiles, ansible-lint configuration file and other YAML files. The extension uses file pattern match to associate the file with the YAML language. For details about the file pattern and associated schema file used by the vscode-yaml extension, read more here.

With this context set, you can now go ahead and open the root of your Ansible project in the VSCode window. That folder will be a root of your workspace, also treated as the current working directory by the Ansible Language Server while executing Ansible commands in the background. If you try to open an Ansible file without first setting up a workspace, the plugin might not be able to determine the context (such as CWD) correctly. 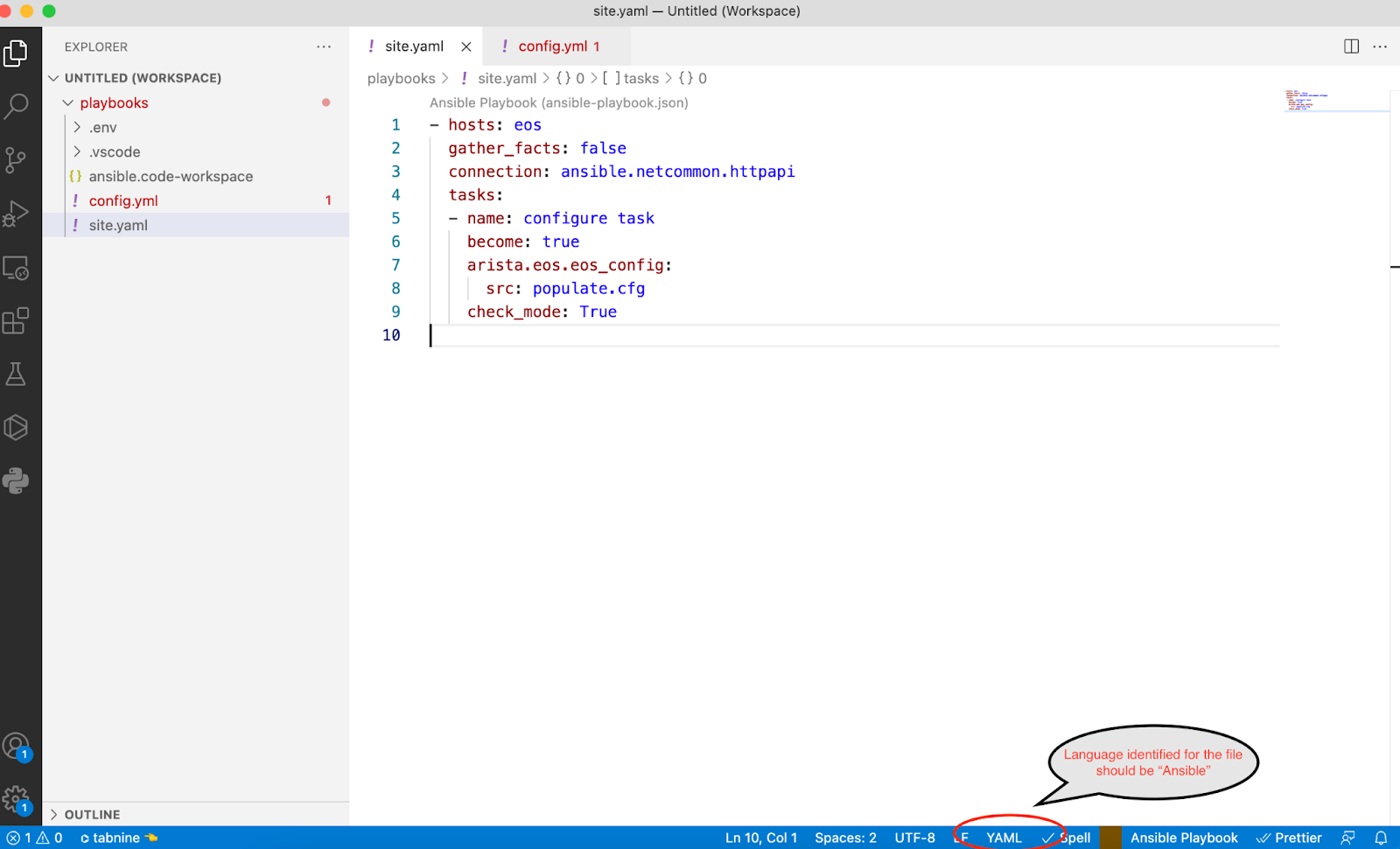 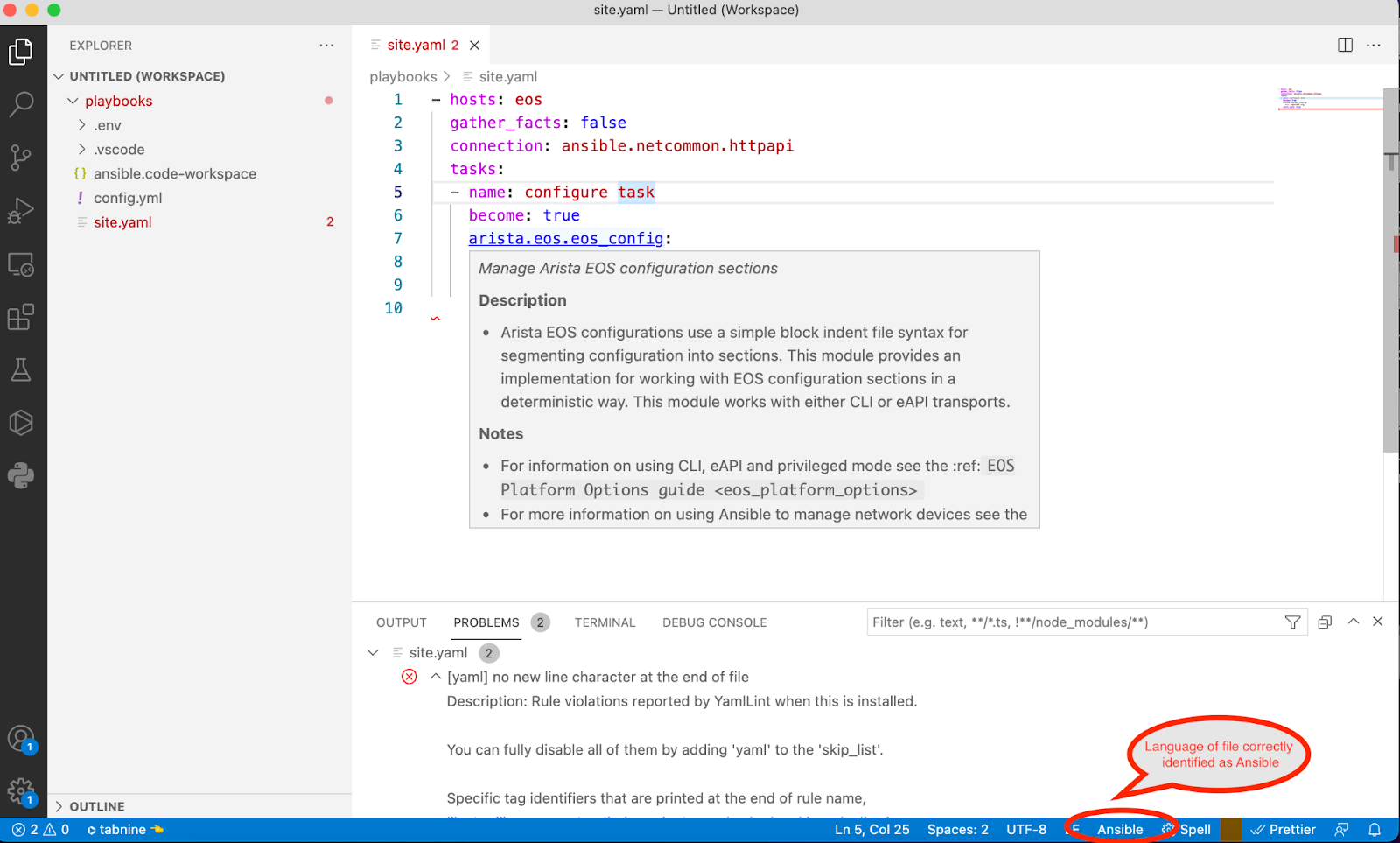 Instead of changing the language for each file, you can set the file associations setting by clicking on “Code -> Preferences -> Settings” and typing “file associations” in the search box. Add an item to associate the extension with the language type as shown in the below snapshot. 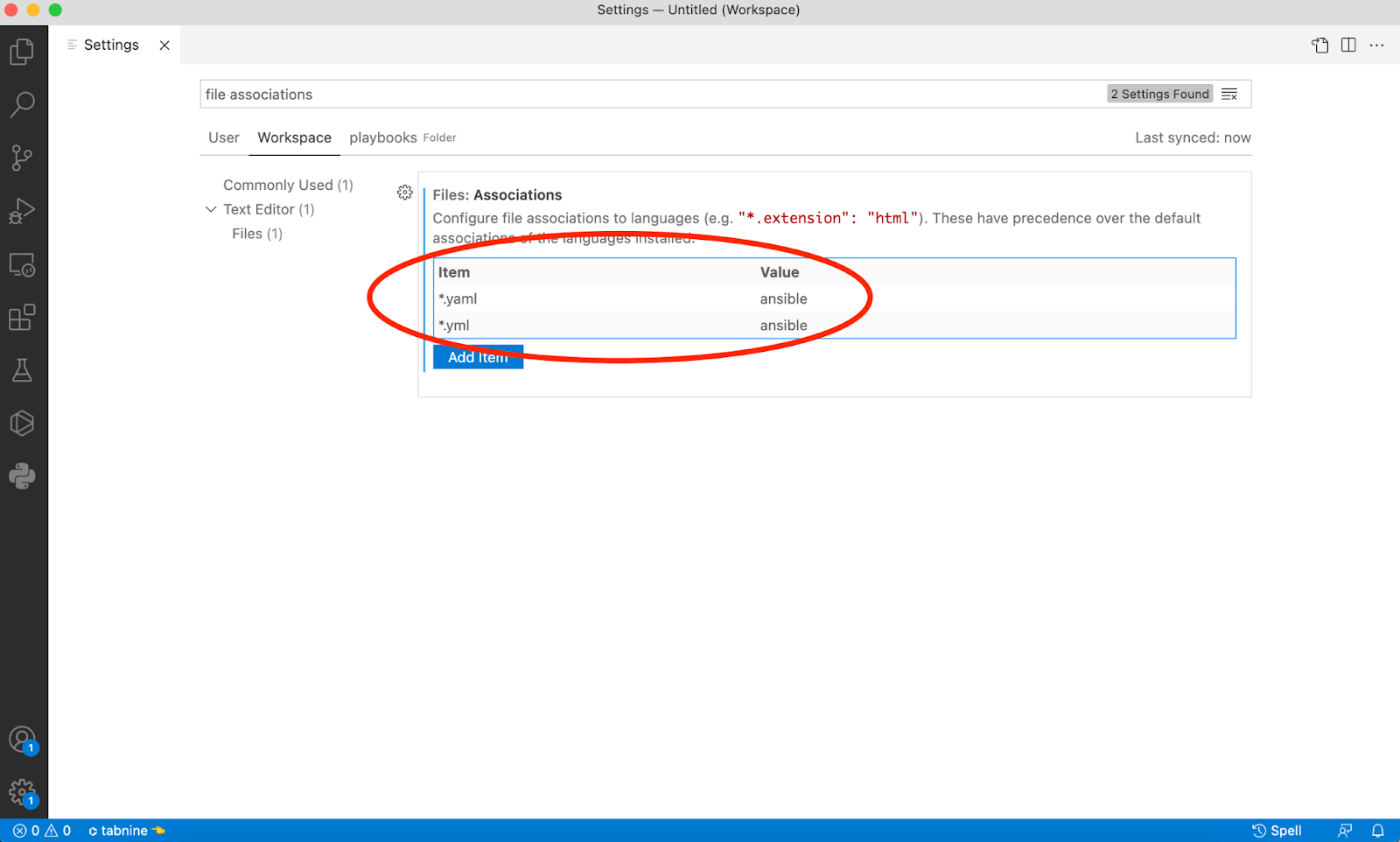 For more information on file associations, refer to the document here. 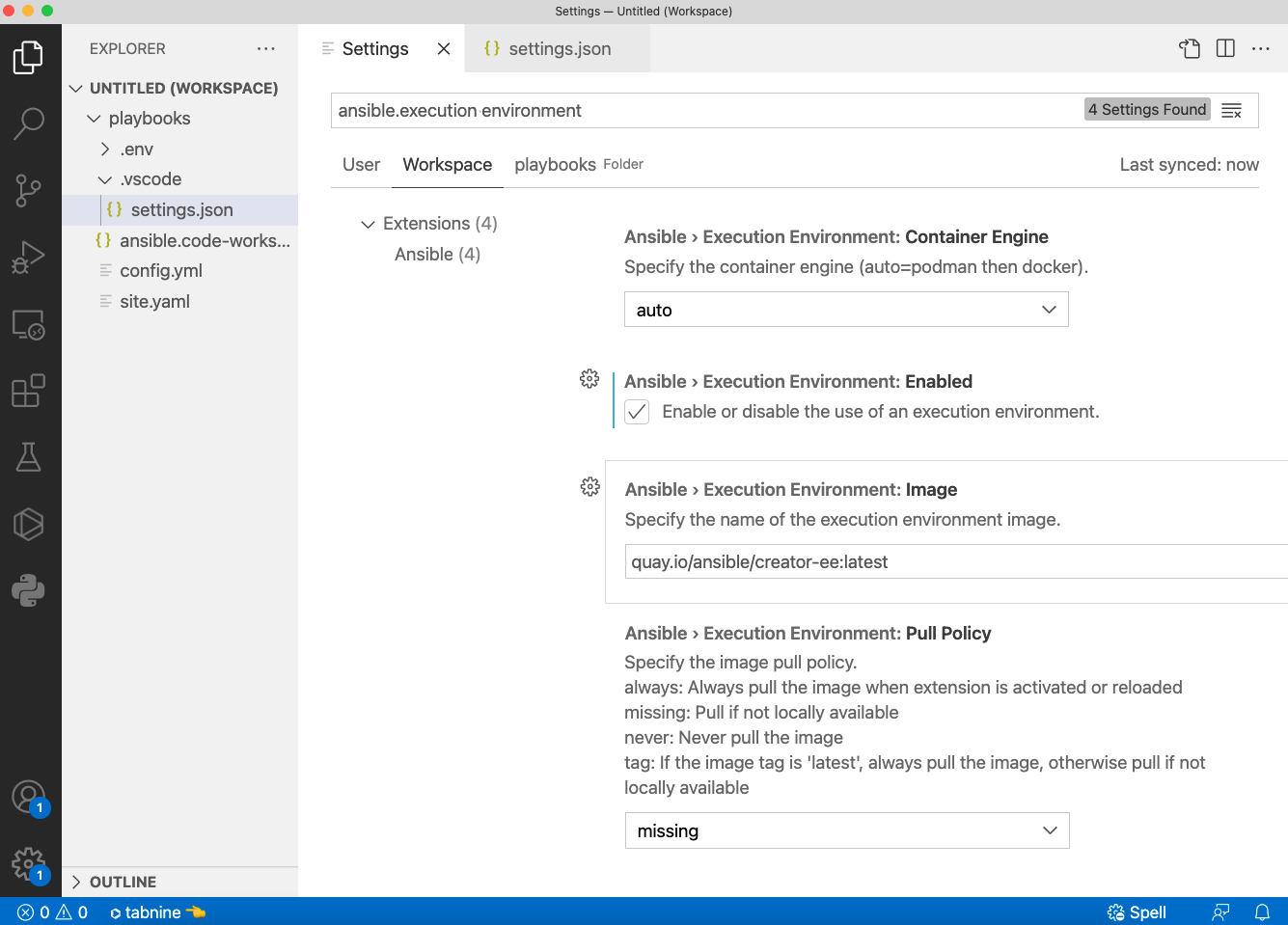 After enabling the execution environment (EE), the extension will pull the “quay.io/ansible/creator-ee:latest” image by default, if it is not present locally. The value of the image can be changed by providing the intended value for “ansible.executionEnvironment.image” setting. After the EE pull is successful, the Ansible extension will copy the plugins docs from within EE to the local cache folder and it will be used to provide auto-completion, hover and goto functionality. Since the “creator-ee” image has “ansible-lint” bundled, the Ansible extension and ansible-language-server will volume mount the entire workspace within the EE and run “ansible-lint” or “ansible-playbook —syntax-check” based on settings to provide diagnostics information in editor. 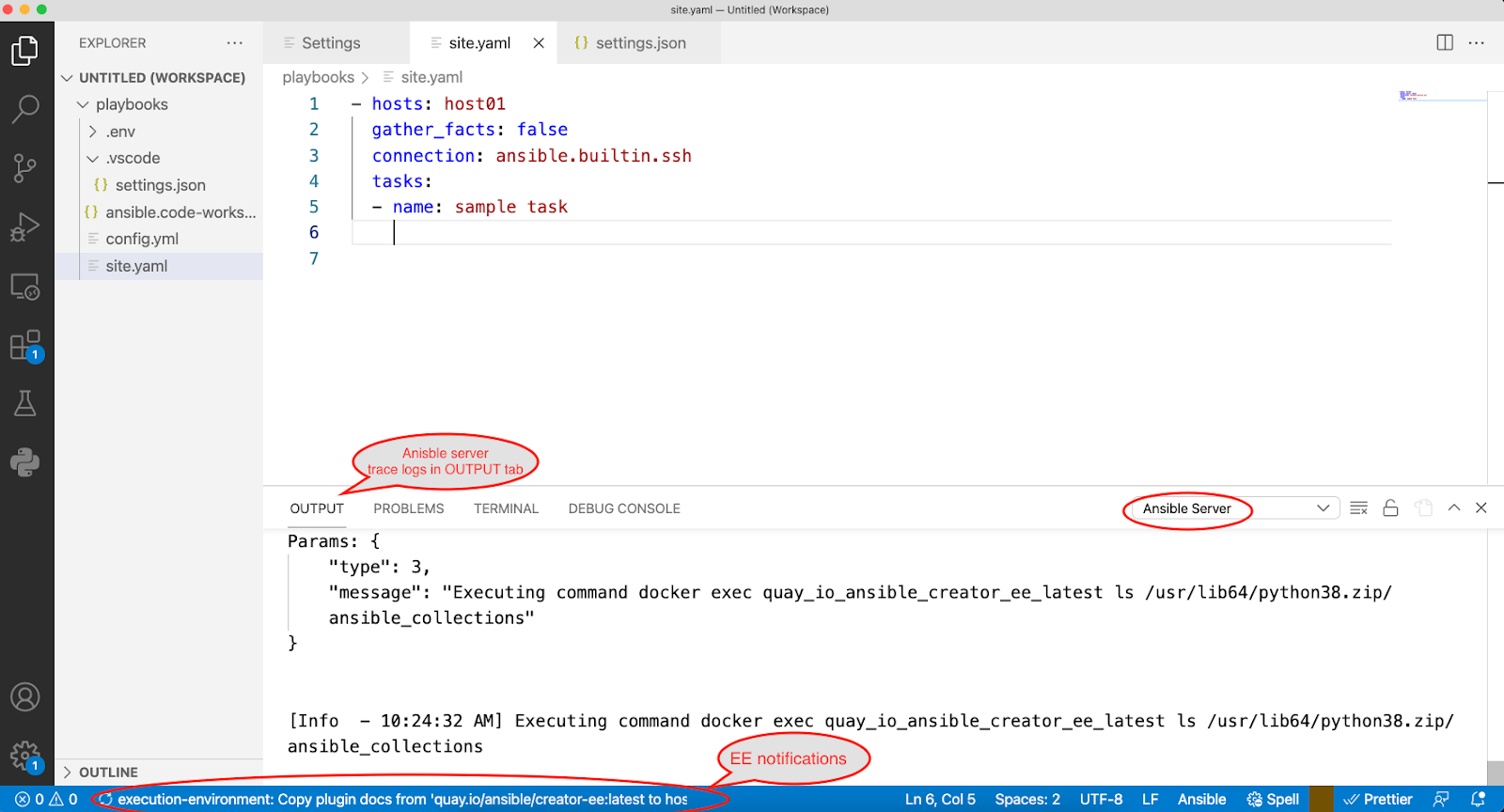 The auto-completions will now provide suggestions for plugins that are part of the given execution environment image name. 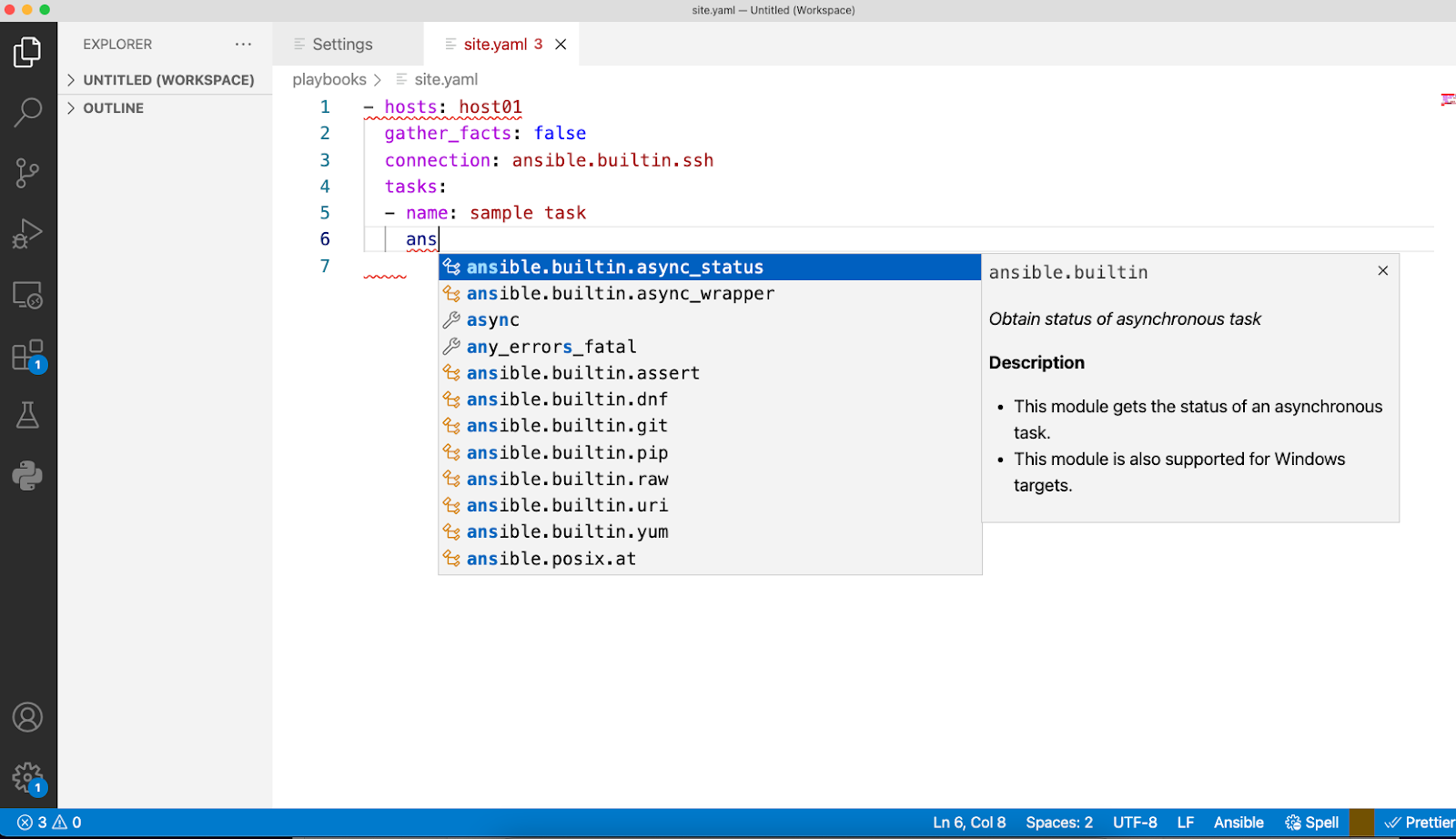 The “trigger suggest” key depends on the keyboard shortcut. To view the associated keys, go to “Code -> Preferences -> Keyboard Shortcuts”

The extension also provides an option to run an Ansible Playbook from within the extension either using “ansible-navigator run” or “ansible-playbook” command as shown in the below snapshot. 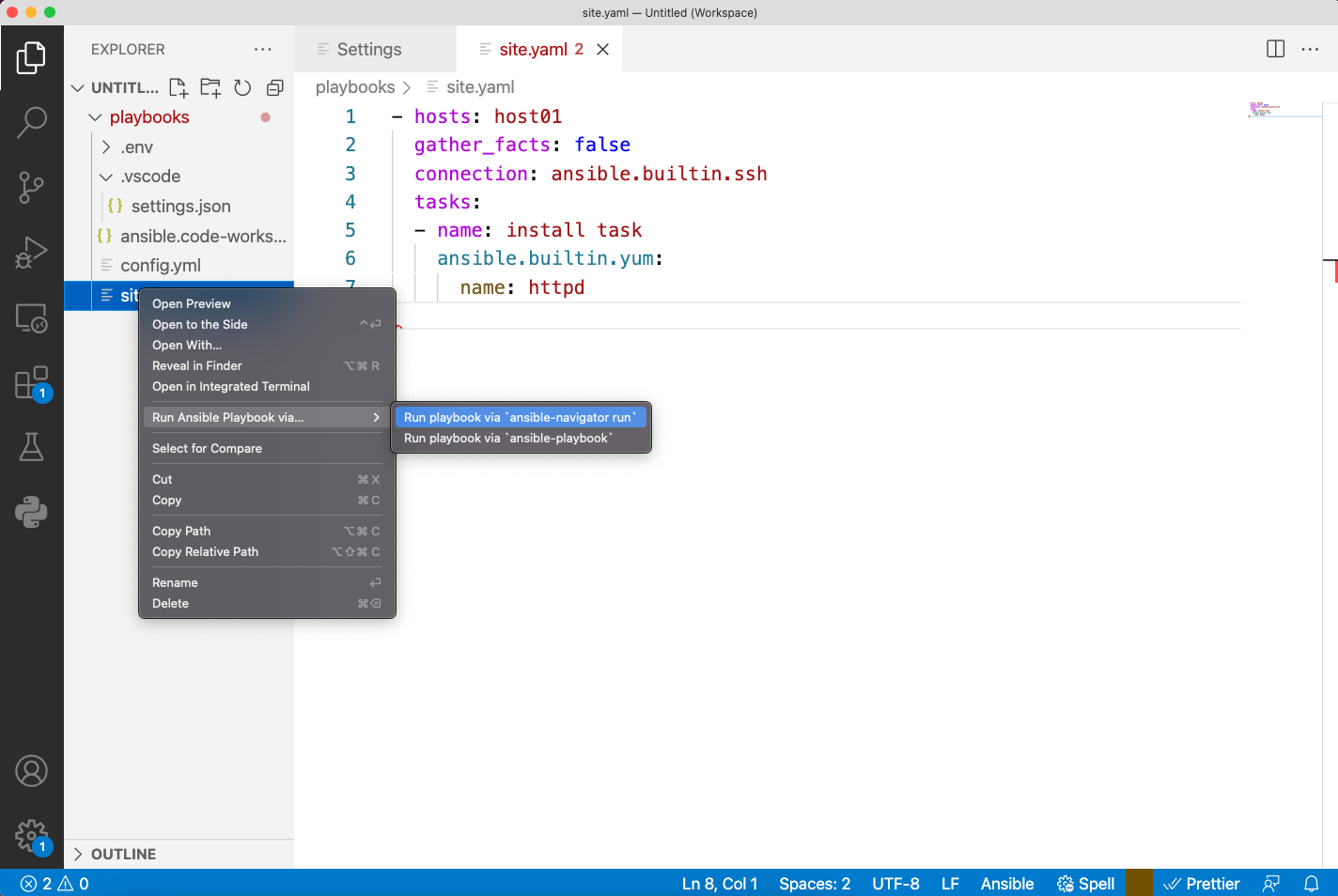 Credit: Thank you Brad Thornton, Colin McNaughton and Tomasz Maciążek for your valuable edits and for making this blog more readable.

Takeaways and next step: 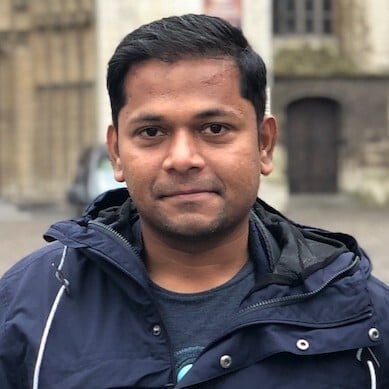