Getting Started with Ansible.utils Collection for Playbook Creators: Part 2

How can ansible.utils collection help in this workflow?

The ansible.utils collection makes it easier to retrieve and parse the data so it can then be further assessed from a structured format.

This module is available as ansible.utils collection. It has a variety of parsers which help to parse CLI output or text output. It can work with multiple remote hosts like network, Linux, or windows.it. It supports multiple parsing engines and it is extensible which means you can create your own parsing engine. It is a single task to run a command, parse and set facts.

Before the utils collection was available, we would need to write three different tasks to run commands, parse the output from command and set facts. But thanks to cli_parse we only have one task which will return structured data from the “show command” output.

In this task we need to provide a command which will execute on the device. Parser, which is a subplugin of cli_parse, plugin.set_fact sets the converted structure in the interfaces key. We can then refer to the interfaces key in our playbook.

The above task will perform following operation:

The Ansible.utils.validate module is a new module available as part of the ansible.utils collection which works with all platforms. It has extensible engine support and currently works with the jsonschema validation engine which uses the jsonschema python library underneath. It is a single task, which reads structured data and validates it against the data model provided in the task. This task will report success or error in case the data is valid or invalid as per the schema.

In this task we need to provide data which is supposed to be structured data. Criteria is a list of criteria. Since currently we are using jsonschema, we have criteria in json format. Engine is a sub-plugin of the top level validate plugin. Here it is “ansible.utils.jsonschema”. Again, you can write your own engine as it is extensible.

The above task will perform following operation:

Now let's use the above plugins from ansible.utils to see how we can use them in actual scenarios. In this example we will see how to use ansible.utils to fetch BGP operational state data, validate it against predefined json schema and also remediate configuration drift when detected.

For this scenario consider we have three CSRv routers which are running cisco ios xe. All of them are BGP neighbors to each other and advertise three networks each. 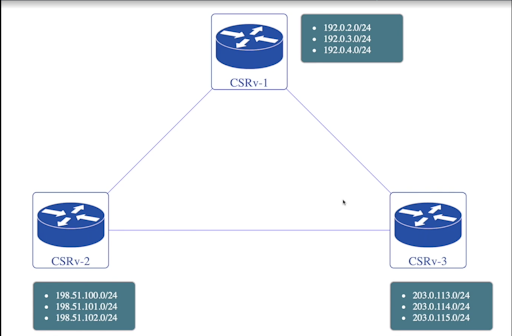 Let's check the CSRv1 node. Lets execute command show running-config | section bgp. As you can see it has two neighbors configured, where both of them have the same Remote AS, so they are IBGP neighbors. The neighbors are activated and soft reconfiguration inbound is enabled on them. This node also advertises three networks.

The above screenshot shows route table entries from node 1. As you can see, this node is aware of six routes, with the next hop being the respective BGP neighbors advertising them.

Now let's check the playbooks which we are using in this example with detailed steps.

Checkout this code if you want to learn more details.

Playbooks are divided into two parts:

1. Gather facts and store it in a yaml file for SOT

In the first task we are gathering bgp_global and bgp_address_family facts from target devices. In the second task we are storing them in a flat file under the hostvars directory. These files will act as SOT (source of truth) for BGP config on target devices.

How does this data look after execution of the playbook? Let's check playbooks/host_vars/csrv-1.yaml. 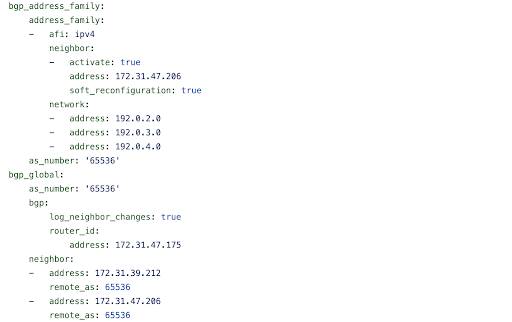 2. Validate structured data against SOT and rectify drift if it is detected

In this step we will inspect BGP operational state data for all the nodes in our topology and then determine if they are running as expected or if there is any configuration drift.

Now let's see the playbooks/verify.yaml playbook which will validate and rectify drift if it is present. 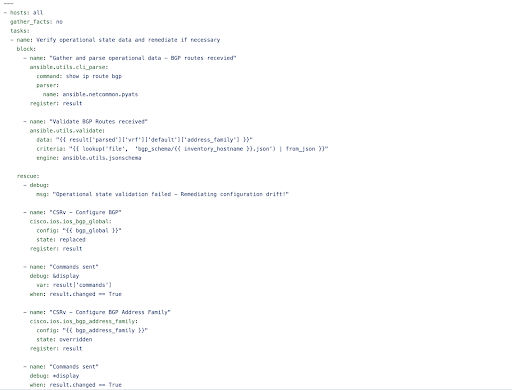 In the first task we have used the ansible.utils.cli_parse plugin to execute the show ip route bgp command on the target device and then pass the output of this command to pyats parser.

The pyats parser then converts the output to structured data which is stored in the result variable.

In the next task we pass the value in the result variable along with a predefined schema to the ansible.utils.validate plugin. The plugin then compares the data against the schema or the criteria using the jsonschema engine. Each node has a schema file that defines the prefix ranges which they received from the other two neighbors .

As we saw from the topology and the CLI that these nodes are supposed to receive six routes (three in total) from each of the neighbor nodes. Now these prefixes are represented as patterns in the schema along with other properties like source_protocol, route_preferences, metric and active state.

The schema also sets the additional properties to false and defines minimum and maximum number of properties as six. This ensures that validating against the schema will always tell us whether the devices are receiving exactly the set of routes which they are supposed to receive or not.

Following is the example of a schema file for node CSRv1.

If the schema validation in the second task fails, the playbook enters the rescue section. This is where we used the BGP resource modules to enforce the SOT which we have saved previously in yaml files on the target devices. The end result will be remediating any configuration drift which causes failure in operation state validation. 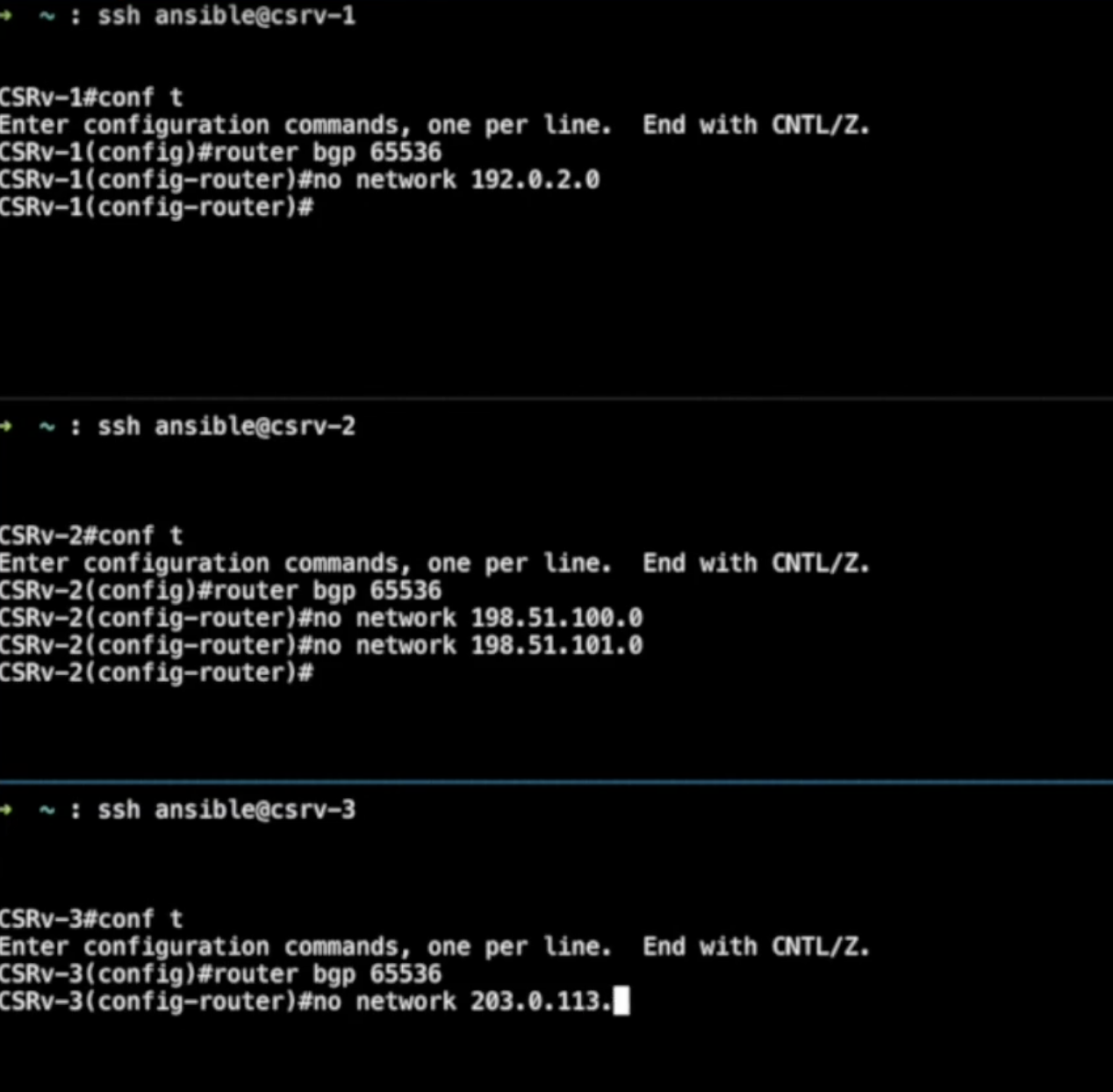 Now we have made changes in all the routers. Let's run the playbook again with ansible-navigator run playbooks/verify.yaml.

This time the schema validation fails. Remediation tasks are executed and they add facts that are missing prefixes on all three nodes. Let's take a detailed look into this. 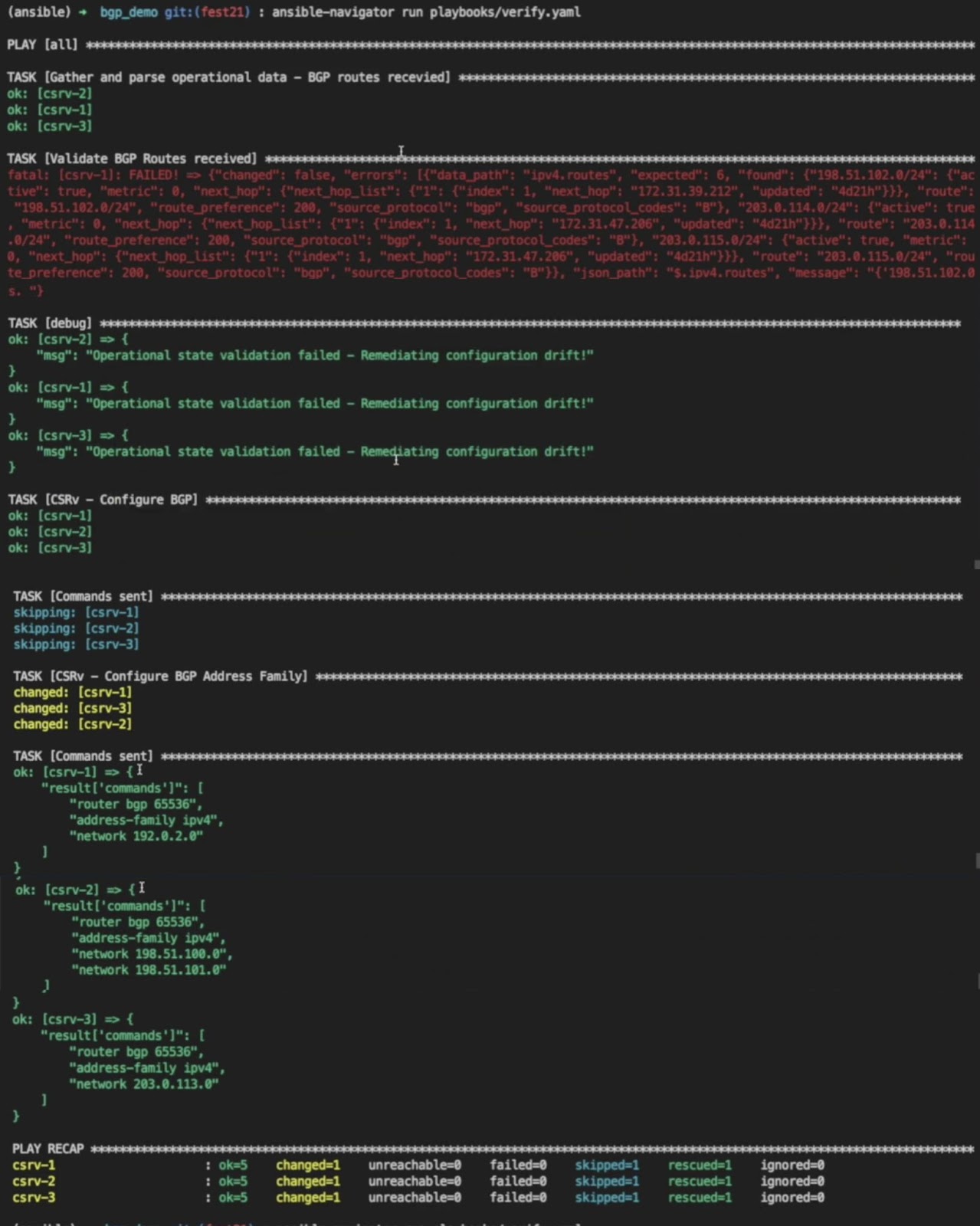 The first task, as usual, fetches the output of the show command and converts it to structured data.

The second task fails because the schema validation fails with multiple errors. The data doesn’t match the constraints defined in the schema. This causes the remediation tasks to execute one by one.

After the remediation tasks are complete, the configure BGP task showed no changes because we did not make any changes to the BGP global attribute.

The second one is where the BGP address family detects the drifts and reconfigures the missing prefixes.

As we can see in the commands sent for all the target devices, the playbook adds facts to the routes that are deleted.

If we run this playbook once again it will be idempotent and report no changes, thereby indicating everything working as expected.

In a production environment, this playbook can be triggered based on external events or also can be scheduled as a periodic job in Red Hat Ansible Automation Platform’s Automation controller to ensure compliance with the expected operational state.

As shown above, the ansible.utils collection:

To learn more about the Red Hat Ansible Automation Platform and network automation, you can check out these resources: 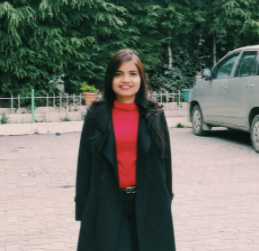