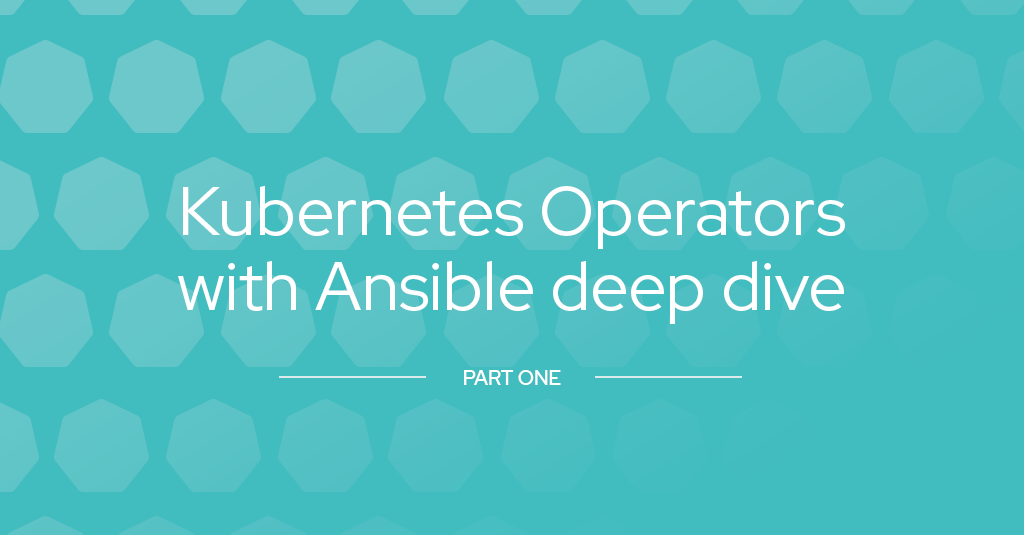 This deep dive series assumes the reader has access to a Kubernetes test environment. A tool like minikube is an acceptable platform for the purposes of this article. If you are an existing Red Hat customer, another option is spinning up an OpenShift cluster through cloud.redhat.com. This SaaS portal makes trying OpenShift a turnkey operation.

In this part of this deep dive series, we'll:

For those who may not be very familiar with Kubernetes, it is, in its most simplistic description - a resource manager. Users specify how much of a given resource they want and Kubernetes manages those resources to achieve the state the user specified. These resources can be pods (which contain one or more containers), persistent volumes, or even custom resources defined by users.

This makes Kubernetes useful for managing resources that don't contain any state (like pods of web servers or load balancing resources). However, Kubernetes doesn't provide any built-in logic for managing resources like databases or caches which are stateful and sensitive to restarts. Operators were created to bridge this gap by providing a way for users to specify a piece of code (traditionally written in Golang) tied to custom resource definitions in Kubernetes.

Operators were so named because they allow you to embed your operational logic of an application into an automated manager running on Kubernetes/OpenShift.

The Operator SDK, and a quick overview of Ansible Operators

Red Hat created the Operator Framework to make the job of creating and managing operators easier across their full lifetime. As part of the framework, the Operator SDK is tasked with creating and building operators in an automated manner for users. Over time it has grown to add several operator types. In 2018, we began work on adding the Ansible Operator type to the SDK. We want to make it easier to build operators in Kubernetes environments based on Ansible.

Why use Ansible for Operators?

At first, operators were written in Golang. This immediately sets the bar somewhat high for anyone who wants to write an operator — someone has to know a relatively low-level programming language to get started. On top of this, you must also be familiar with Kubernetes internals, such as the API and how events are generated for resources.

That's it! The Ansible and Operator SDK abstract away all of the difficult parts of writing an operator and allows you to focus on what matters — managing your applications. If you already have a large base of Ansible knowledge in your organization, you can immediately begin managing applications using Ansible Operator. A further added bonus of using Ansible for your operators is that you immediately have access to any module that Ansible can run. This allows folks to incorporate off-cluster management tasks related to your application. For example:

There are a number of possibilities that Kubernetes Operators written with Ansible can provide a potential solution for.

Creating a Kubernetes Operator with Ansible from scratch

First, install the Operator SDK following their instructions. Once the install is complete, we can create a new operator with the following command:

Now that we have our Operator skeleton, let's take a look at some of the main files used when deploying Operators in general, as well as what the Ansible Operator type generated specifically. These are:

One other directory is present here as well: the molecule directory, which contains files to automate testing your roles/playbooks using Molecule. We will not be covering the use of Molecule here it’s noted for the sake of being complete.

If you run ls -l in the above test-operator directory, you see these files/directories there after creating the new operator skeleton.

This file is used by the Ansible Operator to tell Kubernetes/OpenShift which custom resources (based on the Group/Version/Kind fields) the operator is responsible in handling. It is the glue that ties our custom code to the Kubernetes API:

specifying any other playbook boilerplate. However if you are running more than one role in your operator you can change that line to be:

Also, you'll need to tweak the build/Dockerfile (more on this below) to copy the playbook into the container so add this line:

You would then create the specified playbook in the same directory as the watches.yaml file.

This directory contains a few files related to building the operator artifact. Because operators are just another application to OpenShift/Kubernetes, this artifact is a container built using a Dockerfile. The other files here are related to testing via Molecule, which we are not going to cover in this blog series.

The Dockerfile is very simple, so we won't delve into it much other than to say it is based on the ansible-operator image from quay.io, and copies the roles and watches.yml file into the container image.

This directory contains YAML files for deploying the operator into OpenShift/K8s using the oc or kubectl CLI commands.

The CustomResourceDefinition (CRD) and CustomResource (CR) are defined in the deploy/crds/ directory. The CRD is what the watches.yaml file references, meaning all instances (CRs) of this definition will be controlled by our operator.

The CRD is defined in deploy/crds/test_v1_test_crd.yaml and is mostly boilerplate for OpenShift/Kubernetes:

You can see the operator-sdk command above filled in most of these fields with the values we specified. By themselves, CRDs are not very useful, you need actual instances of what they define — this is what CustomResources do. Our CustomResource (CR) is defined in deploy/crds/test_v1_test_cr.yaml, and is relatively short (compared to the other YAML files, anyway):

Each of the values set under the spec entry become variables passed into Ansible as extra variables. Using these, we can customize the behavior of our operator. The default example creates an entry named size, which we can use in our roles to dynamically scale the application our operator is managing.

The deploy/role.yaml and deploy/role_binding.yaml (not shown), define some RBAC controls which give your login access to manage the custom resources defined above. Role Based Access Control (RBAC) is not covered in this post, so again we're just mentioning them for completeness.

This file is quite long, but mainly it creates a new Deployment resource in OpenShift/Kubernetes, which helps ensure that our operator stays up and running.

This is the directory where you place any roles you wish to include with your operator, and should be familiar to experienced Ansible users. As noted above, this directory is copied completely into the Ansible Operator container, and roles here can be referenced in the watches.yaml file or other playbooks you include.

Roles commonly use the k8s module (included in Red Hat Ansible Automation since the 2.6 release) to manage resources on the cluster. If you are familiar with Kubernetes resource files, this module will be very intuitive (the YAML from a resource file can be copy/pasted directly as the input to this module). To learn more, you can read the documentation for the k8s module here:

This concludes our deep dive into operators, Operator SDK, and Ansible Operator creation and structure. Operators written using Ansible give you the power of operators in general, while allowing you to leverage preexisting Ansible expertise to quickly get up to speed on deploying applications on OpenShift or Kubernetes.

For more information on Kubernetes Operators with Ansible please refer to the following resources:

Stay tuned for part 2 where we will show a real-life use of a Kubernetes Operator with Ansible, including scaling it up, and testing on AWS!

Want to learn more about Kubernetes Operators? Want to learn how Ansible can drive automation inside Kubernetes? Join us at AnsibleFest Atlanta 2019 from Sept 24-16, 2019. The Ansible Automation and OpenShift teams have worked together to bring more cloud native content to AnsibleFest than ever before! Get your tickets today!