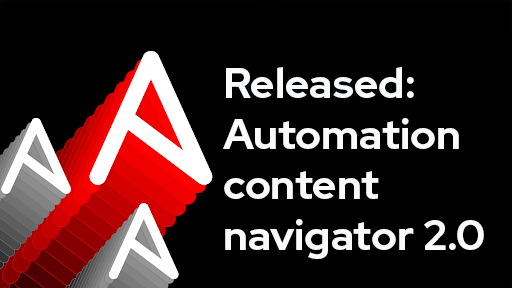 Coinciding with the release of Ansible Automation Platform 2.2, navigator 2.0 introduces improvements to existing functionality alongside additional features to aid in the development of automation content.

Within navigator 2.0, you will find:

Before the release of navigator 2.0, a separate command line application (ansible-builder)  was needed to build execution environment images from human readable YAML files. With this release, ansible-navigator installs ansible-builder and includes a new build command that is used to pass through arguments to ansible-builder allowing content creators to create images from a single familiar interface.

All enhancements to ansible-builder can be leveraged from ansible-navigator. This functionality helps to cement navigator’s role within the content creators workflow to allow not only content creation and environment introspection, but also execution environment build support from within navigator.

For example, imagine you’re creating some new workflows and you need to leverage an additional Collection from Ansible automation hub. Instead of installing the ansible-galaxy command-line tool on the local workstation, you can run a command within navigator to install the Collection in a directory alongside the new workflows. Because the current working directory is bind mounted to the running container, the installed Collection is placed on the local filesystem.

After running the above command, a new directory called “Collections” should exist in your current working directory (CWD). This directory will be made available to the execution environment at runtime because the CWD is bind mounted at runtime. This allows you to always tell which Collections are installed within the execution environment and which have been bind mounted to the container.

The settings command surfaces the configuration of the local environment from within navigator. From the settings screen, creators are able to view default values and values changed by local configuration parameters. Leveraging this within an integrated development environment (IDE) such as VS Code is especially helpful using features like command+click to open a file path within the editor. For example, a creator is able to see that a local ansible.cfg or ansible-navigator.yml file is being sourced by navigator and can open that file within the configured editor directly from the navigator settings screen.

Imagine you are an automation content creator starting a new project. You know that this new project will:

In addition, you know you want to customize navigator to use your preferred code editor.

Navigator sample settings allow creators to display a sample ansible-navigator.yml configuration file with all parameters commented out. This allows the creator to pick and choose which settings to adjust for the new project. Things like default execution environment image name, image pull policy, which code editor to use when opening files from navigator, etc. are all configured from ansible-navigator.yml. Additionally, this sample settings file can be written to the local filesystem where, once edited for the new project, can be sourced by navigator.

Multiple automation projects usually mean multiple execution environments that need to be defined as the default execution environment for the corresponding project. By allowing settings files to be created from navigator, creators do not need to rely on memory to define the parameters necessary to customize and deploy their projects.

With navigator 2.0, more commands are supported in standard out mode. For example, the collections subcommand can now run in standard out mode and interactive mode. It’s very useful to automation creators to see which Collections are available in the environment to figure out which modules can be leveraged in automated workflows.

Additionally, navigator now supports automatic mode selection for commands that are only offered in a single mode. Previously the --mode command line argument was necessary for commands that only supported mode stdout.

Navigator is easily adapted to individual creators' workflows and preferences. Even more, by adding standard out support for more commands, navigator can now be utilized in automated build environments.

One very nice use of interactive mode is in the newly added and experimental feature for linting Ansible content. The lint subcommand, when coupled with a path to an Ansible Playbook or directory of Ansible content, opens a new screen in navigator where problems and suggestions are displayed for the file(s) passed into the lint command. As the problem files are corrected and saved, the list of problems and suggestions shrinks. Coupled with a code editor’s ability to control+click to open a file path, editing files with potential issues is quick and fits in well with the rest of the creator experience.

Automation content navigator 2.0 is available for use today! Navigator offers improvements to the authoring and testing experience. As a result, automation content creators have more tools on hand to assist in the creation and maintenance of automated workflows.

Takeaways and Next step: