The wheel was invented in the 4th millennium BC. Now, in the 4th millennium, I am sure the wheel was the hottest thing on the block, and only the most popular Neolithic cool cats had wheels. Fast forward to the present day, and we can all agree that the wheel is nothing really to write home about. It is part of our daily lives. The wheel is not sexy. If we want the wheel to become sexy again we just need to slap a sports car together with all the latest gadgets and flux capacitors in a nice Ansible red, and voilà! We have something we want to talk about.

Like the sports car, Red Hat Ansible Automation Platform has the same ability to turn existing resources into something a bit more intriguing. It can enhance toolsets and extend them further into an automation workflow.

Let's take Terraform. Terraform is a tool used often for infrastructure-as-code. It is a great tool to use when provisioning infrastructure in a repeatable way across multiple large public cloud providers like Amazon Web Services (AWS), Microsoft Azure, and Google Cloud Platform (GCP). Many organizations use Terraform for quick infrastructure provisioning every day, but if we combine it with the power of Ansible, we can see that it builds into an efficient workflow.

As I said, Ansible has a way of enhancing existing tools and giving them an overhaul. If an organization already uses Terraform, it would be a shame to waste all of the man-hours used in building their manifests and configurations. Instead, we can use what we have to create a workflow that builds more Terraform manifests, automates the provisioning, and provides a scalable method of triggering post-provisioning tasks. With Ansible taking the lead, we are able to extend the infrastructure provisioning with Terraform and allow for things like configuration-as-code, application deployment, and compliance automation. The list of possibilities is as endless as accessories on the latest German car.

I did this by downloading the binaries and simply copying them into a basic execution environment.

I also embedded a keep_secrets file which we will use with Ansible vault.

Once I have pushed my execution environment to my private automation hub, we are ready to get building!

I'm going to work on provisioning with Terraform with a simple use case using three files:

All the components we need to deploy cloud infrastructure are part of these manifests - this is our infrastructure-as-code. Using Terraform to deploy them allows us to also destroy all the provisioned infrastructure quickly and easily. This can be beneficial by not leaving any configuration artifacts on your cloud platform and speeding up the whole life cycle.

To create these manifests we can use Jinja templates and use surveys in our automation workflows. A survey in Ansible Automation Platform allows us to present consumers of automation with the opportunity to input data that we can use inside of our automation. 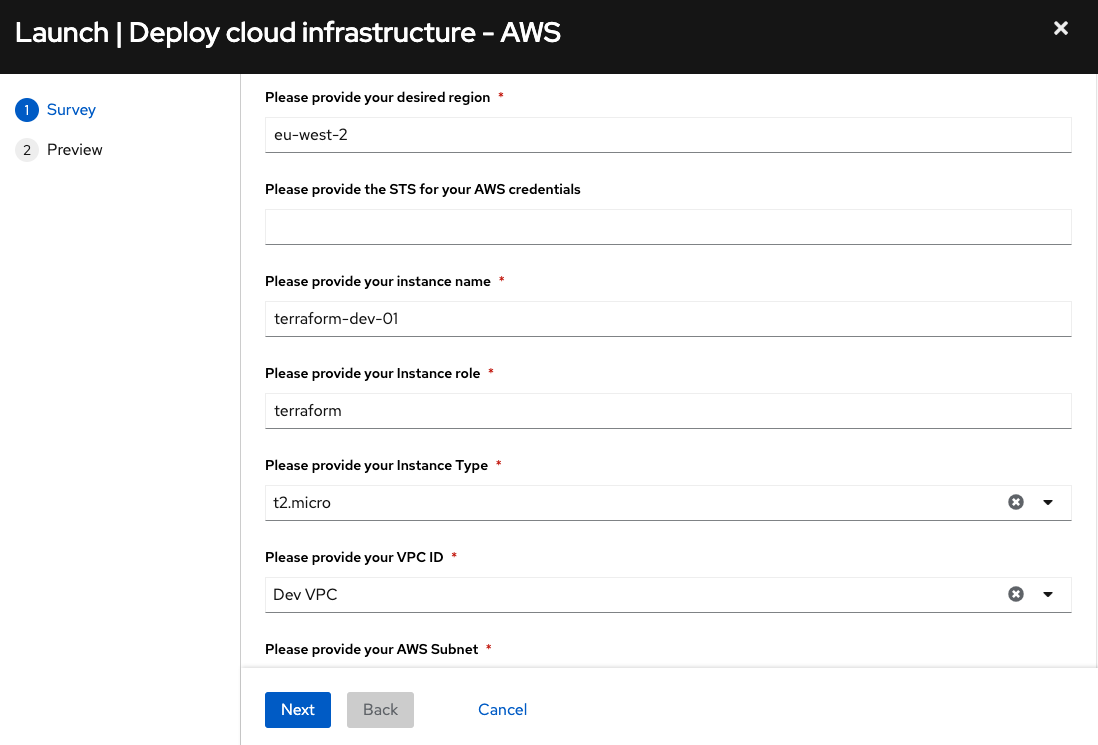 This means creating all the infrastructure-as-code components really becomes a dynamic mechanism for our teams, making the process even easier. With the Jinja templates, I create the variable manifest, and the main.tf will then use all of those components to build and plan the deployment. 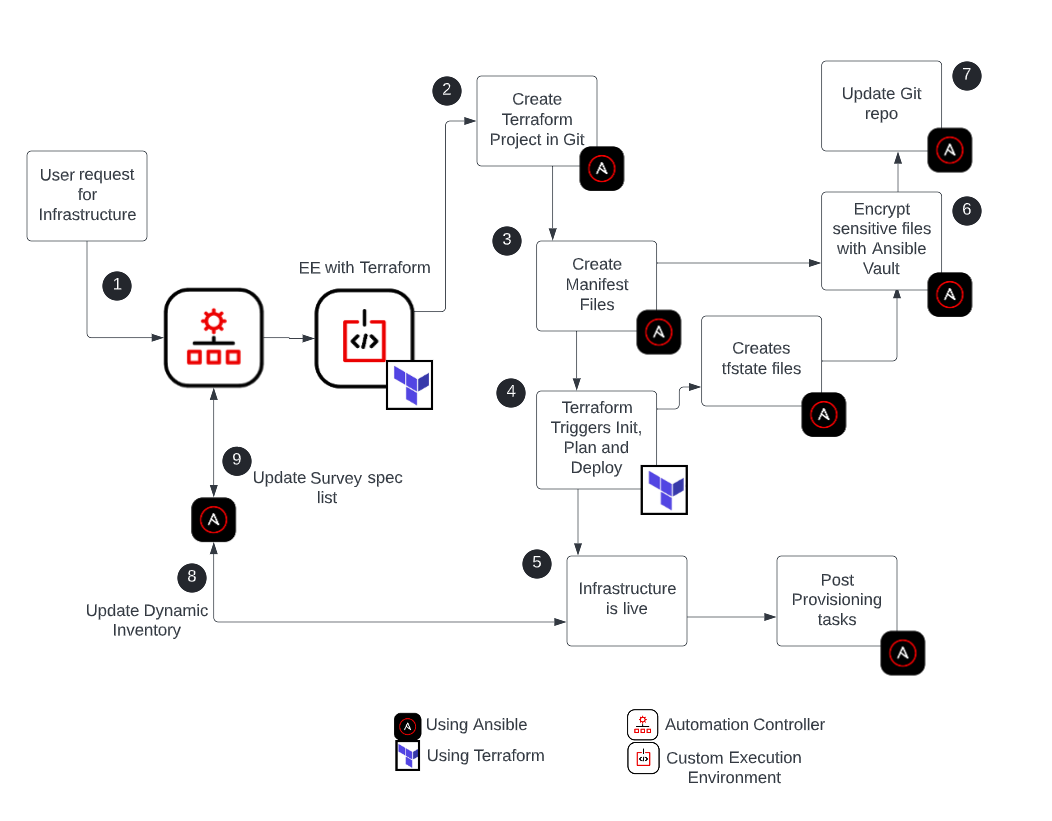 With the survey data provided, we can get Ansible to create a project folder for Terraform to work with. This should be stored in a source of truth, for my example, I am using a Git repository. Once we have our project folder, we will create all the manifests and configurations we need for Terraform to build and deploy the infrastructure. Ansible Automation Platform has modules we can use to trigger all the Terraform actions from our playbooks, and it will trigger Terraform to initialize this project folder during its build process to make sure it installs the correct provisioner.

I am currently working on AWS; however, if you wanted to provide access to multiple providers for Terraform to use, this would be as simple as creating a Jinja2 template for it and giving your users the option in a workflow survey. In our playbook, we can now just use a Terraform module to trigger the initialization, planning, and deployment of the IoC manifest.

Once Terraform deploys the infrastructure, it creates a state file that is used to store your managed infrastructure configuration and map resources. If we want to modify infrastructure, we will reuse the state file. However, it can also be used as a source of information about that instance for post-provisioning tasks. If we need to make a change to a load balancer, for example, this file is a simple source of information we can harness. Since our execution environments are ephemeral, we will push these state files to our build repository once we have encrypted them.

Now, Terraform is great at creating infrastructure as well as destroying it. It simplifies the whole process and does a good job of cleaning things up. We will need the variables manifest used to de-provision our infrastructure, so It is best that we put these and our state files in our build repository to not only be able to destroy the instance later, but to also be able to reuse this configuration or modify the infrastructure. Since these files will have sensitive information, we can use Ansible to encrypt these files before we push them to our source of truth using the secrets file we embedded in our execution environment.

The wheels are turning, but now what?

Ansible Automation Platform allows us to use dynamic inventory plugins, so we will use the relevant plugin to allow us to update the inventory to accommodate our newly provisioned host. One of the really cool things here is that we can provide the tags we want in our Terraform manifest files, and in Ansible we can narrow our inventory hosts with filters looking specifically at these tags.

These filters in our dynamic inventory source allow the automation controller to harvest just the instances that match these criteria and simplify further tasks post provisioning. The last part of the provisioning process is to create and update a survey for the termination of the instance we created. To do this, we use Ansible to create a listing of all the projects in our Terraform repository, and we can pass this on to create a survey specification, which we update whenever we run a create or destroy job. 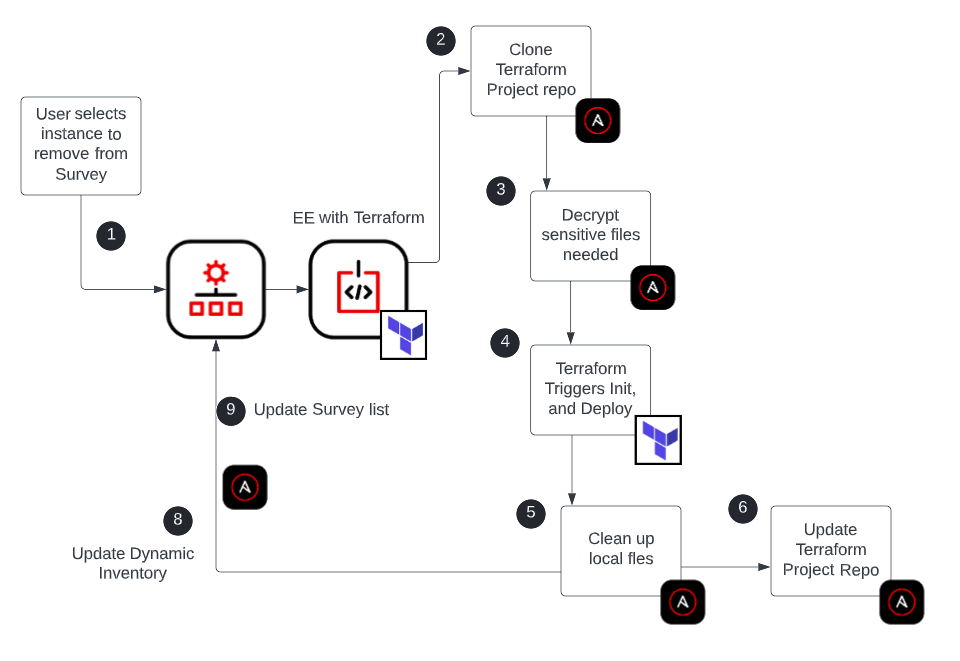 Since we used Terraform to provision our infrastructure, de-provisioning it, is pretty straightforward. As I mentioned before, when Terraform creates the infrastructure, it establishes a source of truth that can be used as an easy way to de-provision infrastructure. We can use our automation workflow to grab the correct Terraform build details from our repository, make changes to any external systems that might be affected, like load balancers, and then trigger Terraform to destroy the instance it created from our playbook.

We have created a renewable method of building and destroying infrastructure using Ansible and Terraform. To extend the automation further and do the important work of deploying workloads, system hardening, and compliance, we only need to rely on Ansible. Ansible Automation Platform allows us to create automation workflows that show us a visual logical progression of the steps in automation and allow us to combine tasks in an end-to-end process. Not only is this a great way to view and inspect your automation process, but I find it beneficial in pinpointing possible improvements or perhaps adding rollback features to the process should a step fail or encounter issues.

Time to Terraform your clouds bringing infrastructure-as-code and configuration-as-code together with our centralized Ansible Automation Platform! 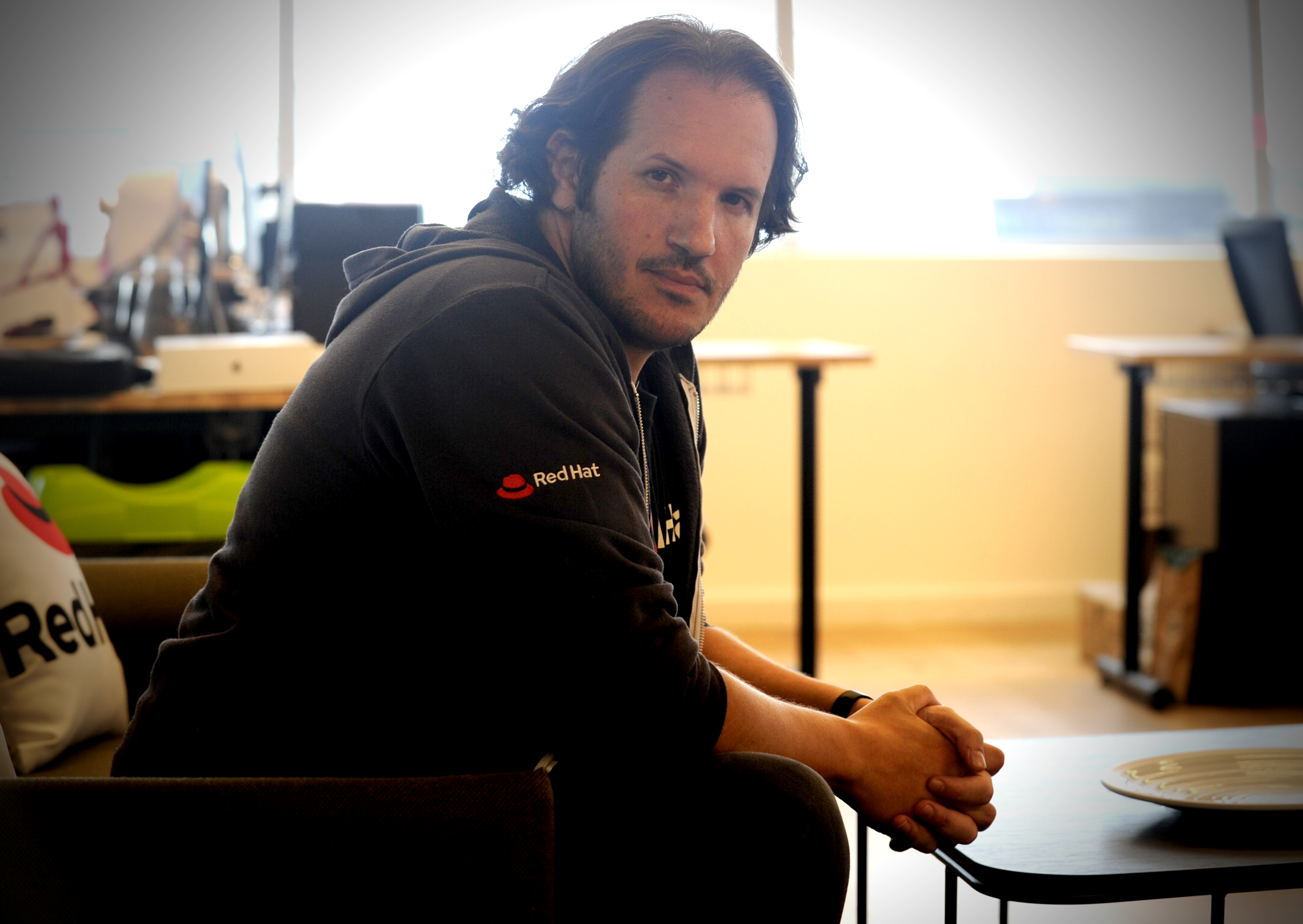 Nuno is a Technical Marketing Manager for the Ansible Automation Platform. He is a Red Hat Certified Architect and a Certified Instructor with over 15 years of experience in multiple technologies. Currently based in South Africa, he has international experience with having worked all over Europe and Africa.